A Glimpse of Glory

Now about eight days after these sayings Jesus took with him Peter and John and James, and went up on the mountain to pray.  And while he was praying, the appearance of his face changed, and his clothes became dazzling white. Suddenly they saw two men, Moses and Elijah, talking to him. They appeared in glory and were speaking of his departure, which he was about to accomplish at Jerusalem.

The disciples of Jesus were able to catch a glimpse of his heavenly glory. You and I probably won’t get to see this with our physical eyes, but we are able to perceive God’s glory in nature, in loving community, in acts of forgiveness, justice, and mercy. But, the most amazing thing of all is that God, through the Spirit, is transforming us right now into the image of Christ’s own glory. What a wonder!

When I’m on vacation, I love to get up early, while it’s still dark. My goal is to be able to sit in some naturally beautiful place and watch the sunrise. I love catching a glimpse of the sun as it just begins to peek above the horizon. (Today’s photo is from a trip my family and I took to Central California.) 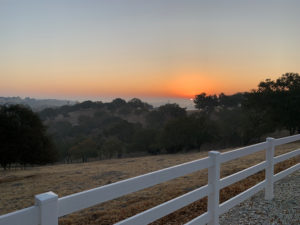 There’s something about that first glimpse of the sun that I find deeply moving. My feelings have to do with the quietness of the morning, the freshness of the air, the distinctive quality of the light. But seeing the sun in that way as it glows in the distance stirs my soul.

I wonder if that’s how Peter, John, and James felt when they witnessed the so-called “transfiguration” of Jesus. They had gone out to a mountain at Jesus’s invitation, presumably to join him in prayer. This happened sometime during the night or early morning, since Luke mentions that the disciples were “weighed down with sleep” (9:32). While Jesus was praying, all of a sudden “the appearance of his face changed, and his clothes became dazzling white” (Luke 9:29). Then, he was joined by Moses and Elijah, who “appeared in glory” (Luke 9:31). Peter, shaken out of his sleepy stupor, offered to build some shelters for the three glowing men (Luke 9:33). (Parenthetically, I love this response of Peter. It’s so sweet and candid, showing both care and confusion.) But Peter’s offer was interrupted by a voice from heaven saying, “This is my Son, my Chosen; listen to him!” (Luke 9:35). When the voice stopped speaking, everything returned to normal.

Don’t you wish you could have been there on that mountain? Wouldn’t it have been amazing to catch a glimpse of Jesus’s heavenly glory? I’m not sure my response would have been any better than Peter’s, mind you. But I would have been moved by what I was seeing even more than when I witness a vacation sunrise.

It’s unlikely that you and I will ever see Jesus in his glowing glory this side of the age to come. But God does bless us with glimpses of his glory at times. Yes, we can see divine glory in the natural beauty of God’s creation. We get a peek of God’s glory when the people of God are united in worship and loving service. We see the glory of God most clearly and profoundly in Jesus, who, according to the Gospel of John, is the very Word of God Incarnate. “And we have seen his glory,” John writes, “the glory as of a father’s only son, full of grace and truth” (John 1:14).

Right now, through the Spirit, God is at work in us, changing us into the glorious image of Christ. When you choose to love in a costly way, when you seek God’s kingdom rather than your own success, when you forgive one who has wronged you, when you offer your whole life to God in worship, then you catch a glimpse of God’s glory, not out there on the horizon or out there in the future, but right where you are, right now, in you. What a wonder!

What are some of the most glorious things you have ever seen with your eyes?

When in your life have you had a sense of God’s glory?

How do you respond to the idea that God is transforming you into the glorious image of Christ?

With a wise friend or with your small group, talk about your experiences of God’s glory.

Lord Jesus, I wish I could have been there with Peter, John, and James as you were transfigured. It would have been amazing to catch a glimpse of your glory.

O Lord, may it happen more and more as I offer all that I am to you. Amen.

Seeing the Glory We must be shown God’s glory again: we must encounter it anew and afresh in…
Whose Glory Are You Seeking? May God give us the grace to be humble leaders, people who seek what is…

One thought on “A Glimpse of Glory”