A Review of Terry Looper’s Sacred Pace: 4 Steps to Hearing God and Aligning Yourself with His Will

There is no end to books by über-successful people who are pleased to share their success secrets with you if you’ll just plop down $25.00 to buy their book. The storyline of such books is all too familiar: here’s how amazingly successful I am, and here’s how you can imitate me so you can be successful too. 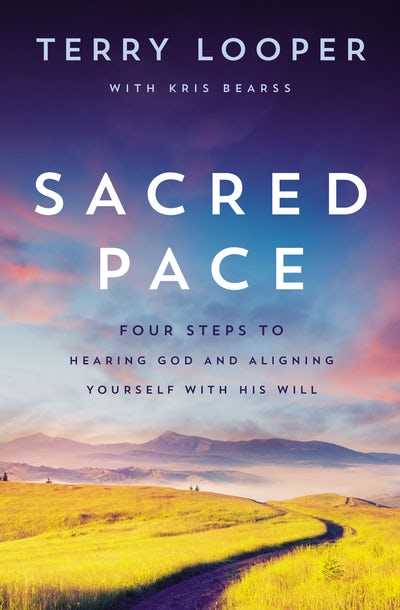 Sacred Pace could have been one of those books. But it isn’t.

Yes, Sacred Pace was written by an extremely successful entrepreneur. Starting from scratch, Terry Looper built one of the most profitable and respected businesses in Texas. But he doesn’t begin Sacred Pace by touting his amazing achievements. Rather, here’s how the book starts: “Thirty-five years ago, my life in the fast lane came to a screeching halt. Everything I thought I knew about who I was and what mattered most came crashing down around me. That season was the worst thing I’d ever experienced—and the best thing that could have happened for my future” (3). From that strikingly honest beginning, Terry goes on to share with bracing vulnerability his struggles and shortcomings, which God used to turn his life around.

One of things I love most about Sacred Pace is the humility and authenticity with which it was written. Yes, Terry will speak openly about many of the extraordinary things that have happened to him. But he consistently shares his failures, and not just the “way back then” kind, but ones that are current, ones to which I can relate. Terry didn’t write Sacred Pace so you’ll know how great he is. He wrote so you will know how great God is and so that you will have a deeper, daily, and transformative relationship with the “God who loves you and everyone around you more than you ever could” (paraphrasing Terry).

Terry discovered the greatness and grace of God as he went through a dark time in his life, when ambitious workaholism led to burnout and breakdown, something Terry refers to as a “shutdown on every level” (14). In this darkness, Terry found the light of God’s grace through Christ. Or perhaps it would be better to say that God found Terry, whose life would never be the same.

As he began to rebuild his life on the foundation of God’s love in Christ, Terry knew he had to live in an altogether different way. He wanted everything in his life—including his business dealings—to be surrendered to and guided by God. So, Terry learned a new way of living, a new way of doing business, a new way of being a husband, father, and friend. This is what he shares in Sacred Pace.

These steps are easy to describe. Living them, well, that’s not quite so easy. But Terry’s explanations and stories will help you not just to know what a sacred pace involves but also to know how to begin to live it.

I know this to be true from my personal experience. Several months ago, when Terry asked me to read his manuscript, I gladly agreed. As I read an early draft of Sacred Pace, I was struck by what I have already mentioned: Terry’s vulnerability and humility, his ability to explain spiritual practices clearly without lots of technical language, his consistent witness to God’s grace. But I also found myself drawn to put into practice what Terry was describing. I knew I needed more of a sacred pace in my life.

For example, recently, I was facing the question of whether or not to hire a certain person for the De Pree Center. After getting to know this person, I knew I wanted to bring her on board. It would have been easy for me, at this point, to make it happen. But I knew that I hadn’t yet consulted my Friend Jesus, as Terry would say. I needed to tell Jesus all I was thinking, feeling, and hoping. But I also needed to surrender my will to his. In Terry’s turn of phrase, I needed to get neutral, to get to the place where I was truly ready to accept whatever Jesus wanted to do. As I sat quietly with my Friend Jesus, I began to let go of my agendas, my desires, my need to control. After a while, I could finally pray truly, “Not my will, but your will be done.”

There is something wonderfully freeing about getting to this point of trustful surrender. Freedom, as it turns out, is a gift Terry wants to give you and me. At the core of his personal mission in life is “liberating souls.” Terry wants us to experience the freedom that comes from truly being led by our Friend Jesus. He wants us to know the freedom of trusting God fully from a place of genuine neutrality. He wants us to be set free to enjoy God’s guidance and blessing in every part of life, including but not limited to our daily work. Terry didn’t write Sacred Pace so you can be successful. He wrote it so you can be liberated to actually experience the love, wisdom, and blessing of God each day.

This short review of Sacred Pace can’t begin to do justice to the book, which is why I would urge you to buy it and read it for yourself. If you are an entrepreneur seeking to honor God in your business, this book is a must-read. But the wisdom of Sacred Pace applies not just to creative business deals but to every part of life, no matter your job, your family situation, your life context. Sacred Pace will help you to be liberated so that you might live in the love and wisdom of God each day.

You can purchase Sacred Pace from Amazon or Christian Book Distributors.

Here is a video of a portion of a conversation I had with Terry Looper last year, in which I ask what he would share with a person who wants to live as a disciple of Jesus in the workplace.

Finally, here’s a short clip of Terry talking about the writing of Sacred Pace.

Dr. Mark D. Roberts is the executive director of Fuller’s De Pree Center and the primary writer of the Life for Leaders daily devotions. His most recent book is a commentary on the New Testament letter to the Ephesians (Zondervan, 2016). Mark and his wife Linda, an executive coach and spiritual director, have two adult children and one lively Golden Retriever.

Episode 56: Are You Working at the Right Pace? Do you feel overwhelmed, distracted or stressed at work? Do you feel yourself hurtling towards…
Hearing and Doing the Words of Jesus at Work If you want to build your life on a solid foundation, Jesus says you should…
Hearing God In a world filled with all kinds of noise and distraction, we can easily miss…
Hearing the Disturbing Words of Jesus Sometimes the words of Jesus bring extraordinary comfort and inspiration. Sometimes, however, they are disturbing.…