And Mary said, “My soul magnifies the Lord, and my spirit rejoices in God my Savior,  for he has looked with favor on the lowliness of his servant.”

María wasn’t just a diaper changer, she was a King-maker. The same God that spoke the world into being, spoke her womb into being. But God didn’t only need her womb. God needed her witness & her words. She not only gives birth to the Word, but she bears witness to that word. She allows the Light to come into her life, so that the Light can go through her life unto the world.

Mary wasn’t just a diaper changer, she was a King-maker. The same God that spoke the world into being, spoke her womb into being. But God didn’t only need her womb. God needed her witness & her words. 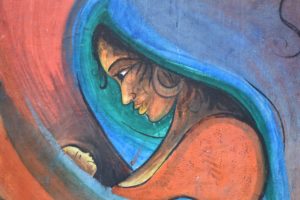 Mary didn’t know she would be preaching her first sermon that day. No seminary education. No copies of Hebrew texts. Yet she was a theologian & preacher.  She had never met the prophetess Hannah a day in her life, but her words echo Hannah’s song of liberation in 1 Samuel. That’s because women are carriers of wisdom & pass it down through generations. They’ve been prophetic witnesses forever.

Mary was also disciple-maker and leader. She is the carrier of ancestral stories: “Just like [God] promised Abraham that he would…” (Luke 1:55). She has knowledge of God’s promises to God’s children. Carrier of ancient-present promises now fulfilled through womb, word & witness. Oh, she was shaped by that Word. But not without shaping that Word. Mary grew in leadership.

“There is no more wine,” Mary states confidently in John 2. Understand the woman behind these words to understand the weight of these words. She ushers in the first miracle in Jesus’ ministry. She inaugurated the Kingdom. That’s what women of Word and New Wine do. They bear witness to the Word they carry. She knows the signs & the times. She has felt the contractions of the coming Kingdom. Women know before others know. “Do as he tells you;” she unapologetically instructs & teaches the servants what to do. She doesn’t draw attention to herself, but to her son. She gave birth to that word, and most importantly she bears witness to that word.

Beloved: Our Mother Mary sings to you: “Let it be done to you according to God’s word” so the Light can go through you.

Where have you seen light this week? How has light gone through you unto others this week?

God of light and God of love, God that sends light to us so that your light can go through us. The darkness can easily dim your praise. There is no button to turn off the darkness. Help us to find the switch that turns on the light in all the places where it is missing. Send forth your light, your love, your truth, your hope, your compassion to us, in order that these same things flow through us, into all the souls that are in need of it. Grant light through and grant us gentle grace. Amen.

Inés is an ordained pastor, preacher, reconciler, writer, and speaker. We are pleased to feature Inés as a regular Life for Leaders writer.

Honor Your Father and Mother Ephesians 6:1 is the first Bible verse I ever learned in Sunday School. My family…
Honor Your Father and Mother in Memory Before we leave the command in Ephesians to honor our parents, one borrowed from the…
Advent: Light With Us: Immanuel This is an affirmation of presence. Not hopes to be, not begging to be, God…
Mary’s Work and Your Work Sometimes when we speak of work, we think only of paid work. But some of…