An Example of Coming to Yourself

Then Jesus said, “There was a man who had two sons. The younger of them said to his father, ‘Father, give me the share of the property that will belong to me.’ So he divided his property between them. A few days later the younger son gathered all he had and traveled to a distant country, and there he squandered his property in dissolute living. When he had spent everything, a severe famine took place throughout that country, and he began to be in need. So he went and hired himself out to one of the citizens of that country, who sent him to his fields to feed the pigs. He would gladly have filled himself with the pods that the pigs were eating; and no one gave him anything. But when he came to himself he said, ‘How many of my father’s hired hands have bread enough and to spare, but here I am dying of hunger! I will get up and go to my father, and I will say to him, “Father, I have sinned against heaven and before you; I am no longer worthy to be called your son; treat me like one of your hired hands.”’ So he set off and went to his father.

Sometimes we can be “lost” without knowing it. Yet, by God’s grace, we have moments of “coming to ourselves,” as Jesus said, or “coming to our senses,” as we might say today. When we see ourselves clearly, when we admit our need, we recognize our lostness, then we are ready to turn to the Lord so that we might be found.

In yesterday’s Life for Leaders devotion, I focused on the experience of the younger son in Jesus’s parable of The Prodigal Son. This young man, perhaps better called the lost son, chose to live extravagantly, thus losing all of his money and ending up starving while feeding pigs for a living. He had truly lost his way. But finally “he came to himself,” as Jesus puts it (Luke 15:17). We might say he came to his senses. He saw himself clearly. He recognized his desperate situation. This recognition enabled him to begin to turn his life around. The biblical language for this is repentance. The lost son’s repentance was a crucial step forward in his journey to becoming found.

When I think of the young man’s experience of coming to himself, I remember something that happened about 25 years ago. In this case, my own son, Nathan, was the leading character, though it wouldn’t be fair to refer to him as a prodigal. He was only 2 ½ years old, after all. So, not a prodigal son, but a lost son.

When Nathan was around 2 ½ years old, he began to enjoy his freedom and strength. He loved playing at the park and going on hikes (see the photo of Nathan and me from this time of life). But he also enjoyed exploring, often wandering away from the oversight of his parents. Once he was at the park with my wife, Linda, and our younger daughter, Kara. While Linda was preoccupied with Kara, Nathan sauntered off on his own. Realizing he was out of sight, Linda searched for him frantically for several minutes. This was terrifying, of course. Finally, Linda found Nathan, much to her relief. That evening, she and I tried to figure out how we could get Nathan to keep from wandering off and getting lost (literally). 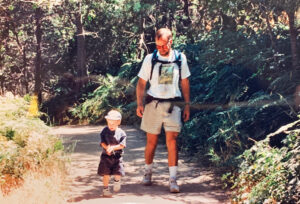 Mark Roberts as a young man with his son Nathan, age 2 1/2. Photo copyright of Roberts’ family.

One day Nathan and I were at a large, unoccupied park in a rural section of town. As was his custom, Nathan began to wander away. At first, I went to fetch him, but then I hatched a plan. I’d let him walk away, watching from a distance, hiding behind trees and such. Maybe he’d realize that he was alone and decide that wasn’t a pleasant experience. Maybe he’d stop walking away from his parents.

So, for several minutes Nathan rambled away from where we had been playing. He seemed completely oblivious to the fact that he was alone. He was enjoying his adventure in freedom. But, after about five minutes, all of a sudden his situation dawned on him. He had a genuine “came to himself” moment. He looked around with a worried expression. Because he couldn’t see me, he called out to me. Soon, he began to cry.

At this point, I was having one of those “I’m going to ruin my child” moments as a parent. I wasn’t sure what to do. I believed that if I immediately came to Nathan, then he wouldn’t experience enough of the pain of lostness to be motivated to stop wandering off. Yet, I couldn’t bear watching my son cry as he called for me. I’m pretty sure that in those moments I was feeling at least as bad as he was.

Finally, after a couple of minutes – which felt like hours – I decided he had had enough sadness, and so had I. I emerged from my hiding place and ran to Nathan, picking him up in my arms. Through my own tears, I told him, once again, that he should never wander off like he did. This time, he appeared to get it. And he never did get lost again.

My point in telling this story isn’t to hold myself up as a paragon of parenting. I share this story, rather, because it paints such a powerful picture of “coming to oneself.” I can still picture the very moment when Nathan realized that he was lost. I can still remember the fear in his eyes. And I know that was, for him, the beginning of genuine repentance. Feeling the weight of his predicament, he decided to live in a different way in the future.

I expect that you may have had similar moments in your life of “coming to yourself.” Perhaps you made poor choices and began to feel their negative implications. For a while, you may have been able to ignore your situation. But then something happened to open your eyes. Like the lost son feeding pigs, or my lost son in the park, you began to look at yourself clearly, to see the quandary you had made for yourself. You were finally ready to turn in a new direction.

If you’re in a difficult place in your life today, perhaps need a fresh experience of “coming to yourself.” Why don’t you ask the Lord to help you with this? If you’re in a good place today, I expect you know others who aren’t. Let me encourage you to lift them to the Lord, asking for the grace of a “coming to themselves” moment. When we realize that we are lost, we’re finally in a place to be found.

Have you ever experienced literal lostness, either your own or that of someone you love? What happened? How did it feel?

Why do you think that sometimes it’s hard for us to “come to ourselves,” that is, to see ourselves clearly in our neediness?

What has helped you in the past to “come to yourself” and acknowledge your need for God’s mercy?

As you read today’s devotion, you might sense whether or not this is a time for you to “come to yourself.” If it is, find a place of quiet so you can think and pray about what is stirring in your heart. You may find it helpful to talk with a wise friend, a pastor, or a spiritual director.

Lord Jesus, thank you for the times you have helped us to “come to ourselves.” Thank you for not abandoning us, even when we’ve wandered away from you.

Lord, if I’m in need of a “come to myself” moment now, may I be open to what your Spirit is doing in me. Give me courage to face the facts of my life. Give me the grace to want to turn to you today.

I pray for others I know who are lost. Maybe they don’t even know it yet. By your grace, help them to “come to themselves” so that they might be open to your mercy. Help them to know they are lost so they might be found by you. Amen.

Find all Life for Leaders devotions here. Explore what the Bible has to say about work at the unique website of our partners, the High Calling archive, hosted by the Theology of Work Project. Reflection on today’s Life for Leaders theme can be found here: Best of Daily Reflections: Hope for the Formerly Faithful

Texas Get Ready... Road Ahead is coming to Houston! You Can Now Receive Vocational and Career Coaching at the Fuller Houston Campus! Scholarships are…
How to Respond to Anxiety—In Yourself or Others God, through Jesus Christ, isn’t a distant or unapproachable God. Whether through an on-the-run “Help…
Don’t Put Yourself in God’s Place Sometimes we worry because we feel as if we’re responsible for everything, even the things…
Episode 45: Marketing Yourself Like Jesus Hearing the term “marketing” can bring up a mixture of feelings.

5 thoughts on “An Example of Coming to Yourself”