Below the Glass Ceiling

I have a weird super power. I don’t like it, but I sometimes disappear. It’s not like a magic trick with stage lights and misdirection of the eye. It happens in the most casual and usual circumstances. I remember when I was in film school in college during my sophomore year, and it was finally time to move from reading about what cameras did to actually practicing with them. Without a second thought, we, the students, all gathered around the cameras. But since there were only about five cameras available, only about half of the class could use them, while the other half took the roles of subjects for the cameras to film. All of the guys immediately swarmed around the cameras and started experimenting with them, while the rest of us, the ladies, were left to stand there.

About ten minutes passed of us watching the professor give the students behind the cameras numerous tips. I thought for sure that he would call out for us to switch places eventually, but he kept walking between each group of guys answering their questions. That’s when I felt it, my super power kicking in. Tired of my magical abilities, I immediately left my position as a model and pushed my way in beside someone with a camera and started doing experiments of my own. The professor then passed by, and I loudly suggested that the students behind the cameras switch. I remember the look of embarrassment on his face when he looked around the classroom and realized what had happened. “Thank you,” he said.

As much as I’d like to imagine that the men I look up to as mentors or as bosses seek to include me as much as they do with my male peers, I have to face the reality that that’s not always the case.

As much as I’d like to imagine that the men I look up to as mentors or as bosses seek to include me as much as they do with my male peers, I have to face the reality that that’s not always the case. The reality that I’ve experienced is that, more often than not, the men I’ve worked with or around tend to stick together. This goes for Christian and non-Christian circles alike. In church leadership, in school, and in the workplace, there seems to be this unspoken bond of “apprenticeship,” that male mentors and bosses share with other men who are trying to work their way up the ladder. For years, I watched this happen as my male peers were constantly offered jobs or gigs that seemed so easy for them to get because someone “remembered” them. I used to think that sexism was overt and obvious and that it would be recognizable. But the reality I’ve experienced is that it is quiet, ignored, and not acknowledged. To be ignored, to be invisible is a form of sexism as it often results in the lack of equal opportunity by simply not being included. The glass ceiling is real, and few people bother to look past it to see the women who are just as great and qualified as their male peers. Experiencing this in some shape or form at each step of my education and career, I’ve often found it incredibly disheartening to see a career-shaping conversation happen in front of you that you aren’t apart of.

There is hope. While there are plenty of people who don’t even recognize the women below the glass ceiling, there are so many people who do. In one of my first jobs after graduating college, I worked in a talent agency where I was the only female intern. I worked hard to “keep up” with the other guys and make sure that I was seen. Somehow, my supervisor saw the hard work that I was doing and made it a point to share with me how the ins and outs of the office worked, and how their talent agency worked within the wider field of the film industry. I encountered another encouraging boss when I began to create various short films for my church. Time after time, I was remembered for gigs despite there being a pool of other male colleagues.

I know that every woman’s experience with sexism in the workplace and at church is different. Yet I often hear the same things from Christian women on how to combat being ignored and to step forward in a grace-filled way. Now, I don’t have all the right answers, and I am certainly not perfect. But there are a few things I’ve done that have helped me to be seen and to chip away at the glass ceiling from time to time:

Feeling invisible in the workplace because you are a woman is painful. It can make you feel isolated and in doubt about your abilities. Yet God never forgets us, and he always sees us. In Luke, there was a woman who suffered bleeding for years (Luke 8:43-48). She was left to find healing by herself and was isolated from the rest of society due to the cultural customs of menstruation at the time. When she reached out desperately to Jesus, he noticed her. He felt her.

She came up behind him and touched the fringe of his garment, and immediately her discharge of blood ceased. And Jesus said, “Who was it that touched me?” When all denied it, Peter said, “Master, the crowds surround you and are pressing in on you!” But Jesus said, “Someone touched me, for I perceive that power has gone out from me.” And when the woman saw that she was not hidden, she came trembling, and falling down before him declared in the presence of all the people why she had touched him, and how she had been immediately healed.

If you ever feel ignored or unseen at work, remember that you are not alone, and that Jesus is with you. The glass ceiling may seem huge, but Christ is the breaker of chains. 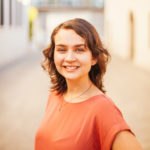 Tiffany Castro-Tremblay, an L.A. native, is a multi-racial Hispanic writer who has been writing stories since she first learned to spell “piano” in the first grade (and is still super proud of that). Tiffany has worked in the film industry for the last six years with experience of working in music videos, shorts, and numerous feature films. The owner of her own production company, Morning Peak Media, she captures anything from weddings to directing promotional material for companies and non-profits. She currently writes for the podcast, Shuddersome and The Good Fruit.

Why Do You Stand There Looking Into the Sky? They were looking intently up into the sky as he was going, when suddenly two…
Esther: The Activist Out of the tribe of Benjamin, forcefully living under the empire of Babylon, there was…
Surprised by Older Adults A few days ago, golfer Phil Mickelson won the 2021 PGA Championship. This was quite…
The Incarnation and Your Daily Work The Incarnation made it possible for the divine Son to work in an ordinary way.…