An Uncommon Guide to Retirement: A Review of a New Book by Jeff Haanen

An Uncommon Guide to Retirement recognizes that we’re in a time of crisis and opportunity. The crisis has to do with the fact that approximately 10,000 Americans are turning 65 years old each day. Yet they are poorly prepared to flourish in the new season of life they are entering.

An Uncommon Guide to Retirement: A Review of a New Book by Jeff Haanen 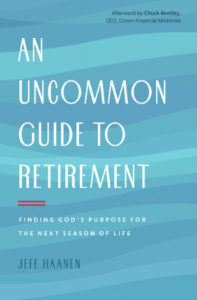 Jeff Haanen, the founder and CEO of the Denver Institute for Faith & Work, recently authored a book called An Uncommon Guide to Retirement: Finding God’s Purpose for the Next Season of Life. I’ve known about this book for some time because Jeff is a good friend and partner in the effort to help people integrate faith and work. I expected great things from Jeff’s book because he is a deep thinker and a fine writer. I was not disappointed.

An Uncommon Guide to Retirement recognizes that we’re in a time of crisis and opportunity. The crisis has to do with the fact that approximately 10,000 Americans are turning 65 years old each day. Yet they are poorly prepared to flourish in the new season of life they are entering. The cultural story of retirement, in which vacation not vocation is the main theme, is failing both individuals and the wider society. Jeff observes, “As I watch family and friends experience the jarring change [associated with retirement], I’ve noticed that the stories they’ve unconsciously believed about retirement don’t match their all-too-human experiences” (p. 14). More broadly, “Today there’s a growing sense of uneasiness among Americans aged 50–70. Baby boomers, and even early Gen Xers, are asking new questions about life, work, calling, and purpose in retirement—questions that our society is largely unprepared to answer” (p. 14).

The cultural retirement dream, a life of endless vacation, turns out to backfire for many who are actually able to achieve it. Of course many in our society are not even able to retire in this way owing to a lack of financial resources. But even those who experience the supposed glory of a well-funded life without obligations often turn out to be miserable. As Jeff notes, “[A] life defined only by leisure in retirement often leads to depression. The BBC reports that retirement can increase chances of clinical depression by 40 percent” (p. 17) Even retirees who are not depressed can feel a pervasive lack of meaning and purpose in their season of endless vacation.

Jeff believes that the retirement dilemma can be addressed by “Finding God’s Purpose for the Next Season of Life” (the book’s subtitle). And this is exactly what he does in An Uncommon Guide to Retirement. What I appreciate most about this book is not its well-informed social analysis, or its engaging real-life illustrations, but rather its attempt to shape our understanding of retirement by key themes of Scripture. Those themes are presented in a two-part structure. Part I focuses on “Renewal”; Part II on “Wisdom.” Both parts take their cues from core biblical truths.

For example, the second chapter of the book focuses on sabbath. Jeff shows that the notion of retirement as endless vacation falls short of God’s intentions for our lives. Yet, Jeff also disagrees with some Christian teachers who insist that we should keep on working and working until we go to glory. Jeff understands the need of most people in the third third of life to experience a season of rest, refreshment, and discernment. In a creative and compelling way, Jeff uses the biblical notion of sabbath to propose that folks who retire should take an extended but limited time for sabbatical. “My argument,” he writes, “is that sabbatical is a way to structure time in early retirement to heal past wounds, seek God’s voice, and find God’s call for the next season of life” (p. 43). Moreover, “A sabbatical structures time so we can develop the spiritual muscles to hear the voice of God, see the beauty of creation, and embrace our place in it” (p. 52). A season of rest is, among other things, a time for spiritual discernment: “Sabbatical is the time to ask the honest question, ‘God, what are You calling me to do in retirement?’” (p. 52).

Another thing I appreciate about Jeff’s book is his openness about his own life. He shares, for example, some of his experiences as a son, as well as a husband and father of four daughters. But this openness might raise questions for some readers. It’s apparent from Jeff’s stories that he is nowhere near retirement age. One might wonder how a person of Jeff’s age could write a book that connects with the real needs and questions of people in the third third of life, not the second third.

An Uncommon Guide to Retirement speaks to this query in several ways. First, Jeff is a careful student of social trends. He sees issues related to retirement in terms of what is happening broadly in our culture. He is well informed about the facts, if you will. Second, Jeff listens attentively to many friends, colleagues, and family members who are wrestling with issues related to retirement and living in the third third of life. He may not be there yet, but Jeff understands the longings and losses of those who are further along in years.

But, most of all, what makes Jeff someone I’m glad to learn from is his faithful and insightful use of Scripture. What he offers isn’t so much the wisdom of Jeff as the wisdom of God found in Scripture and made available through Jeff’s writing. He is truly committed to helping us discover God’s purpose for the next season of life. Because Jeff does this so well, An Uncommon Guide to Retirement is a gift for those who have retired as well as for those who are approaching this season of life. I commend this book to you enthusiastically.

You can purchase a copy of An Uncommon Guide to Retirement here.

Webinar: Uncommon Retirement Webinar with Jeff Haanen, hosted by Mark Roberts. This webinar offered a new vision of…
How to Live Forever – A Review of the Book by Marc Freedman I know what you might be thinking: “Mark, I can’t believe you’ve stooped this low!…
An Uncommon Reason for Speaking the Truth There are many good reasons to tell the truth.
Retirement in the Bible? Some New Thoughts and… If you Google on “retirement” and “Bible,” you’ll find some folks who say “There is…