Story, Calling, and Church: A Review of Aging by Will Willimon

Story, Calling, and Church: A Review of Aging by Will Willimon

In the past two years I’ve read at least a dozen books on what we at the De Pree Center call “the third third of life.” Others prefer to speak of “retirement” or, as in the case of Will Willimon, “aging.” Thus, his recently published book is suitably entitled Aging: Growing Old in Church. 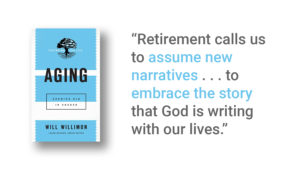 What you’re reading now is the first part of a three-part review of Aging. I should say at the outset that I believe this is one of the finest books I’ve read on third third living. It is full of gracious wisdom informed by Scripture and Willimon’s vast pastoral experience. By the way, Aging appears in a Baker Academic series called “Pastoring for Life.” No doubt this book will be read by pastors and academics. But let me emphasize that there is nothing in this book that would be inaccessible or irrelevant to a broader audience. I recommend Aging to all thoughtful Christians who are seeking a deeper understanding and a richer experience of the third third of life. You don’t have to be a pastor or a scholar to appreciate and learn from this book.

Part of what I love about Aging is Willimon’s frankness about his subject matter. Early on he admits, “Just about everybody wants a long life; nobody wants to be old. Well, I’m growing old. So are you” (p. 2). Why are we reticent about aging? “Let’s be honest: one of the reasons aging requires courage is the looming, encroaching specter of death” (p. 3). Yet Willimon also sees tremendous potential for the third third of life to be a season of growth, joy, and service. He does not deny the potential for third third folk to experience years of vitality and purpose. Rather, Willimon recognizes that aging is not a one-sided experience. For some it is terribly difficult. For others, extremely enriching. For many, both of these things and much more.

Willimon strongly and repeatedly critiques the common American cultural narratives of aging, narratives that are neither found in or supported by Scripture. Those with a top-heavy, robust version of third third delight miss the reality of the losses associated with aging, such as found in Ecclesiastes 12:1-8. At the same time, those who see old age with lopsided negativity fail to derive their vision from biblical revelation. Willimon quotes his Duke colleagues Richard and Judith Hays who write, “Nowhere in the biblical canon are [older people] pitied, patronized, or treated with condescension. Nowhere is growing old itself described as a problem. Nowhere are the eldest described as pitiable, irrelevant, or behind the curve, as inactive or unproductive” (p. 12). Willimon himself observes, “A negative view of elderhood does not come from Christian Scripture but is among the many cultural accommodations that the North American church has made to American culture” (p. 15).

Willimon is not only critical of typical American “retirement” narratives. He also offers an alternative narrative, one based on the Bible and centered in God’s work in Christ:

God gave me the precious gift of life. My life is on loan from God. Even more valuable than my life, God in Christ called me, gave me a vocation to discipleship, whereby my life is caught up in the purposes of God and I am utilized by God in God’s salvation of humanity. . . . While I have life, in whatever physical or mental condition I find myself, in whatever circumstances I am cast, I am called to glorify, to serve, and to enjoy God and God’s good gifts and to use whatever gifts God has given me in service to the needs of others (p. 52).

If we embrace this fundamental biblical narrative then the story of our lives will be fundamentally reframed. For example, according to Willimon, “Retirement calls us to assume new narratives, moving from the story ‘I used to work, but now I have stopped working’ to ‘Once I did this work and then I stopped doing it, so I am now free to do other work’” (p. 29). Without denying the losses associated with aging, Willimon looks to God for a story that gives deep meaning to third third life. “Amid the losses attendant upon aging,” he writes, “we have to find a way to, in effect, write a new chapter in our biography. Speaking more theologically, we must embrace the story that God is writing with our lives, learning to love the plot that is taking an unexpected or even undesired turn” (p. 54).

In order to do this, Willimon asserts, “We must honestly confront the clash between the American Zeitgeist and the Christian story about aging, nourishing the notion that at any stage in our lives we are still called to discipleship and community” (p. 132). In this assertion and in so many more through Aging, we find the notion of calling or vocation. This, according to Willimon, is absolutely essential to aging biblically, purposefully, and fruitfully. Calling is so central, not only to Willimon’s book, but also to third third flourishing that I will devote the second part of this three-part review of Aging to the topic of calling or vocation topic. Stay tuned . . . .

Deep Change for a Disrupted Church: A Review of Scott… This article is a Review of The Innovative Church by Scott Cormode. When most church…
Christ Loves the Church in Spite of the Church’s Flaws and… It’s also common today for believers to minimize the value of the church, to claim…
An Uncommon Guide to Retirement: A Review of a New Book by… An Uncommon Guide to Retirement recognizes that we’re in a time of crisis and opportunity.…
A Review of Tod Bolsinger's Leadership for a Time of… Five years ago, Tod Bolsinger came out with his best-selling book, Canoeing the Mountains: Christian…