Then they remembered his words, and returning from the tomb, they told all this to the eleven and to all the rest. Now it was Mary Magdalene, Joanna, Mary the mother of James, and the other women with them who told this to the apostles. But these words seemed to them an idle tale, and they did not believe them. . . . That same hour [the two people from Emmaus] got up and returned to Jerusalem; and they found the eleven and their companions gathered together. They were saying, “The Lord has risen indeed, and he has appeared to Simon!”

Christ is risen! He is risen, indeed!

For centuries, Christians have used this so called “Paschal Greeting” on Easter morning and throughout the fifty-day season of Easter. It originated in the Eastern Orthodox Church, but now Christians in many traditions have adopted the practice of greeting one another in this distinctive way, thus celebrating the resurrection of Jesus.

You may wonder where this tradition started. If we look into the gospel accounts of the resurrection, we find that the angel(s) at the tomb were the first to announce that Jesus “has risen” (Luke 24:5). The first humans to proclaim this good news were the women who had gone to the tomb in order to anoint the body of Jesus with spices (Luke 23:55-24:1). When they found the tomb empty and heard the angelic announcement, they immediately told the eleven remaining disciples of Jesus the good news that he had risen from the dead.

The disciples, however, did not respond with “He is risen, indeed!” On the contrary, Luke tells us that “these words seemed to them an idle tale, and they did not believe them” (Luke 24:11). One of the reasons I find the reports of Jesus’s resurrection compelling is that they contain historical remembrances that would never have been concocted by the early church. For one thing, the testimony of women was not highly regarded in first-century Jewish culture, so the early Christians would never have made up a story about women as the first witnesses to Jesus (though Jesus himself, we should note, had no problem with drafting women as his first evangelists). Moreover, it’s striking that the male disciples are, once again in the gospel accounts, pictured as being completely confused. These future leaders of the church just didn’t get it . . . yet.

Peter, however, decided to check things out for himself. So he ran to the tomb and found it empty (Luke 24:12). What comes next in Luke is the story of Jesus appearing to two people on the road to Emmaus (Luke 24:13-32). We don’t get a description of what happened to Peter. But, in Luke 24:34, the eleven disciples report, “The Lord has risen indeed, and he has appeared to Simon!” (see 1 Corinthians 15:5). Apparently, this appearance to Simon Peter persuaded the other disciples that what the women had initially reported was in fact true.

Notice that our translation says, “The Lord has risen, indeed” (NRSV). The Greek original uses ontos, an adverb related to the verb “to be.” Ontos means “indeed, really, certainly.” Thus, the Paschal greeting goes back to the earliest hours after the resurrection of Jesus.

Our traditional wording, “Christ is risen. He is risen, indeed!” has a liturgical elegance to it. I’m glad to use it in my celebrations of Easter. But most of us don’t use the word “indeed” in this way in ordinary speech—unless, I suppose, we’re characters in Downton Abbey. We don’t say, for example, “It’s raining today, indeed!” Where I live, we’d tend to say something like, “It is really raining today.” So, for us, the Paschal Greetings could be informally rendered, “Christ is risen! Really!” Or, we might say with the Common English Bible, “The Lord really has risen!” (Luke 24:34).

No matter which words you use today, the point remains. Jesus rose from the dead . . . really! And this makes all the difference in the world. In case you’re wondering how the resurrection relates to life in the midst of the COVID-19 crisis, I’ll take this up in tomorrow’s Life for Leaders devotion. For now, let me wish you a truthful and joyful Easter. You can celebrate even in these challenging times because Jesus is really risen. Or, as people have been saying for centuries:

Christ is risen! He is risen, indeed!

Do you have any Easter traditions that are especially meaningful to you?

Why do you think the disciples of Jesus were initially doubtful about the testimony of the women, given that Jesus had predicted his resurrection on several occasions (for example, Mark 8:31)?

If you really believed that Jesus really rose from the dead, what difference might this make in your life? In your relationships? In your work? 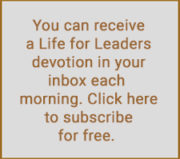 Greet at least one other person today with the tradition Easter greeting. You can do this in person with the people you’re living with. You can do it with others in a variety of digital modes: phone call, digital conference, email, text, Instagram story, Facebook post, tweet, etc.

Today we celebrate your resurrection, your victory over sin and death. Today we honor you as our risen Lord and Savior. Today we offer to you our thanks and praise and, indeed, our lives in grateful love. To you be all the glory! Amen.

You can access all of our Life for Leaders devotions here.