“I have all this wisdom, knowledge, and skill—but I can’t use it.”

This was the first thing Louis Jones said to me when we sat down to “officially” talk about the intersection of disability and work. Truthfully though, this topic comes up in one way or another in pretty much every conversation we have. Louis has held a couple of jobs before, then several years passed without stable employment. He just got a new job working in security, and he is hopeful this will be a long-term option for him.

In terms of disability or diagnosis, as Louis describes it, he has ADHD and a history of trauma that makes things like memory and focus difficult for him at times, as well as some struggles with social interaction. But he wants to emphasize that calling the way his brain works a “disability” is not exactly accurate. His ADHD may make certain kinds of memory and focus more difficult, but it also allows him to more quickly and creatively analyze concepts and make connections between ideas. In terms of history, he was taken from his parents by child protective services when he was six months old because of abuse and neglect, and he grew up in the group home system. There, he describes being overmedicated and not experiencing much in terms of family or daily support. This has had long-term impact on his ability to form a support system and to interact in ways that open up the possibility for deep, mutual friendships.

The statistics around disability and employment can be pretty grim. The employment rate of adults with disabilities, and in particular the subset of adults with intellectual and developmental disabilities, is very low.[1] A number of people with disabilities—particularly those that impact attention or social interaction—struggle just finding a place that will hire them to do any kind of job; and usually the larger questions around deeper calling in their lives remain unaddressed.

All of the barriers illustrated below emerged out of my conversation with Louis, as descriptive of his own experience. We then revised the following together to make sure it reflected his thoughts and experiences.

In terms of disability or diagnosis, as Louis describes it, he has ADHD and a history of trauma that makes things like memory and focus difficult for him at times, as well as some struggles with social interaction. But he wants to emphasize that calling the way his brain works a “disability” is not exactly accurate.

Barriers exist, simply on a practical level, that can make it difficult for some people with disabilities to find stable employment. Some of the most commonly cited barriers tend to be a lack of accessible education/training programs needed for certain types of work, lack of reliable transportation options, or unnecessarily inaccessible job requirements.

These logistical barriers have all come up in Louis’s own life, as have others. But as Louis tells it, one of the biggest barriers he faces is a lack of daily community. He doesn’t have any family to fall back on, and is alone a lot of the time. He ends up spending much of his time watching YouTube videos on topics that interest him. So when he does have a chance to be with people, he will have so many thoughts and feelings stored up about all the information he has heard, that he will want to talk intensely about these subjects right away and for a long time. Partly, this is because he believes the information he has learned to be very important for others to also know, so he finds it logical that he should share it right away. He often feels stressed until he is able to share his many thoughts, and says his intense talking about ideas is a “release valve” for his brain.

He recognizes that this approach to interaction often ends up pushing people away, but even when he sees it happening, he says it feels impossible for him to stop himself. It creates a difficult cycle. He needs daily connection and support in order to learn to have healthy, mutual interactions, but he interacts with people in ways that do not make space for their voices/perspectives, which can lead to people not wanting to interact with him deeply on a regular basis, which only perpetuates the cycle.

These are some of the barriers that can come up through the web of effects related to a system that doesn’t always provide the kind of loving support over time that helps people with disabilities to thrive.

At least as impactful as some of these practical barriers for Louis, and often for other people with disabilities, is the stigma around certain kinds of labels and diagnoses, and the assumptions that can accompany words like “disability,” and in particular “learning disability” or “intellectual disability.”

Louis talks about times he met someone who showed some interest in hiring him for a job, but when they discovered his disability label their “attitude changed.” Even though Louis is intelligent, has plenty of skills, and a deep motivation to work hard, learn, and be a great employee—he notices that too many employers tend to associate a “disability” label with a lack of competence or skill to work well. Though there may be modifications or supports put in place for Louis to do the job, this can be true for any employee. Also, it may turn out that finding new ways to approach the work or having an employee who works in new ways allows for fresh creativity and for positive transformation in the workplace overall. But because of the stigma around “disability,” employers tend to think of it more as a burden than as an opportunity for helpful creativity and innovation.

Even though Louis is intelligent, has plenty of skills, and a deep motivation to work hard, learn, and be a great employee—he notices that too many employers tend to associate a “disability” label with a lack of competence or skill to work well.

Call and Vocation: People and the System

For some people with disabilities, especially those whose disability might keep them from getting credentials from traditional educational systems for various reasons, often finding a paying job of any kind with the highest number of hours is the goal. And since the focus around employment and disability, particularly for certain kinds of disabilities, tends to be on how a person does (and does not) easily fit into the systems and expectations of the standard working world, often the focus tends to be on what might need accommodation.

But what this process can leave out is the topic of vocation and calling, as potentially separate from paid employment. Though it can be great when these can overlap, sometimes they don’t. The jobs Louis applies for (with help of a job coach), may be jobs he is qualified for; but they don’t always line up with some of his deeper gifts and passions. Louis has a real interest in helping people, and he talks about the joy he receives from using some of his own lessons and experiences to be able to come alongside people having similar struggles. He loves to draw, be creative, and make art. He loves nature. He loves God, studying scripture, and reflecting on some of the deeper questions and meanings in life. He is great at cutting through the shallow materialism and artificial status-consciousness of our culture, and reminding people of what is truly important. His lack of adherence to some social formalities can make interaction difficult at times, but it can also invite those of us who spend time with him to let go of some of those formalities that can keep people from being their authentic selves with one another. I know the names of all the employees at a local sandwich shop where Louis hangs out because he tells them to me, and because he cares about people and authentically greets everyone he meets as a fellow member of the human family.

As a society, we are missing out on so many of these gifts, like those Louis has, because we let “employability”—a conversation dominated by how much a person has or can cultivate particular, culturally-valued abilities to get a job—be the primary focus of the disability and work conversation. It is about how we can get people to best fit a system, instead of realizing that the system may need to be reworked (or discarded) to include more of the gifts that are present in the people. Being employed and earning fair pay is important for folks with disabilities who would like to work. But emphasizing vocation, passion, and call makes space for the unique gifts each person with disabilities brings. We will all be more whole as a result.

[1] For more information on unemployment rates and people with disabilities, here are a few articles for reference: http://fiuembrace.fiu.edu/home/qualified-yet-unemployed-the-plight-of-adults-with-intellectual-disabilities/, https://www.disabilityscoop.com/2017/06/29/report-less-1-in-5-employed/23880/, http://www.thinkingautismguide.com/2018/02/why-is-autistic-unemployment-rate-so.html. 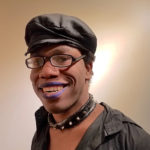 Louis Jones is a thinker and artist living in Altadena, CA. He spends much of his time getting to know people in his neighborhood, and diligently researching and discussing topics like philosophy, religion, the environment, and the Bible. He is passionate about helping people by sharing information he learns. He describes his visual art as coming from his relationship with the Creator and the “spiritual sight” that comes through that connection, and over 50 of his images have been copyrighted with the U.S. Copyright Office. He recently was hired by a security company and looks forward to the new opportunity.

Bethany Fox earned her PhD in Christian Ethics from Fuller, and currently works at Fuller as adjunct professor of Christian ethics and director of student success. She runs the Access Services Office, working to make the institution more accessible and welcoming to students with disabilities. She is the founding pastor of Beloved Everybody Church, a community of people with and without intellectual disabilities, participating and leading together. Her new book Disability and the Way of Jesus: Holisitic Healing in the Gospels and the Church (IVP Academic) comes out May 2019.

Mary’s Work and Your Work Sometimes when we speak of work, we think only of paid work. But some of…
Joseph’s Work and Your Work As I think about Joseph’s work in this story, I’m reminded of how much of…
Work and Worship: Reconnecting Our Labor and Liturgy Work and Worship: Reconnecting Our Labor and Liturgy by Matthew Kaemingk & Cory B. Willson…
"Making It Work" Podcast: Spiritual Practices for Everyday… One of the challenging aspects of being employed in the greater Los Angeles County region…