He is Not Here, But Has Risen!

But on the first day of the week, at early dawn, [some women who followed Jesus] came to the tomb, taking the spices that they had prepared. They found the stone rolled away from the tomb, but when they went in, they did not find the body. While they were perplexed about this, suddenly two men in dazzling clothes stood beside them. The women were terrified and bowed their faces to the ground, but the men said to them, “Why do you look for the living among the dead? He is not here, but has risen.”

The basic good news of Easter is found in Luke 24, when the angels say to the women followers of Jesus, “Why do you look for the living among the dead? He is not here, but has risen.” The body of Jesus, who died a terrible death on a Roman cross, was not to be found in the tomb where he had been buried. No, God raised Jesus from the dead, thus breaking the power of sin and death. Because of the resurrection, everything changes. And it’s all based on the simple good news: Christ is risen! He is risen, indeed!

The final verses of Luke 23 record the actions of several faithful women who had followed Jesus. After seeing where and how he had been entombed, they gathered spices and ointments to honor his dead body. They did this on Friday, but did not go to Jesus’s tomb until Sunday because they rested on the Sabbath “according to the commandment” (Luke 23:56). 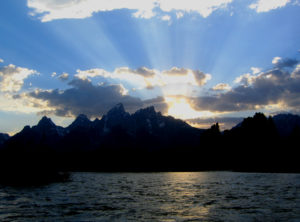 On Sunday morning, the women brought their spices to the tomb, yet they did not find Jesus’s body. This was perplexing to them. But all of a sudden two angels appeared to the women, saying, “Why do you look for the living among the dead? He is not here, but has risen” (24:5).

Here is the core of Easter truth, the reason for the Easter celebration. Jesus truly died and was truly buried. But he was not in his grave because “he has risen.” The Greek verb translated here as “has risen” is a passive verb. A more literal translation would be “He is not here, but has been raised.” Jesus did not raise himself from the dead. Rather, he was raised by God. In this miracle, God vindicated his Son. God broke the bondage of sin and death. God began a whole new chapter of history, one based on the truth of the resurrection of Jesus.

For centuries, Christians have celebrated the resurrection by a traditional dialogue, the so-called Paschal Greeting. One person says, “Christ is risen!” The other responds, “He is risen, indeed!” There, in a nutshell, is the good news of Easter. There is the news that rewrites history. There is the news that changes everything.

Though the resurrection of Jesus happened almost two millennia ago, it still has the power to change everything. It can turn unbelief into faith, pessimism into hope, defeat into victory. The resurrection reassures us that, no matter how hard things are in this life, there is a life to come. The resurrection shows us that God wins and so will we.

So much more could be said about the resurrection, its meaning, and implications. But, today, I’d like to conclude by focusing our attention on the simple truth, the basic good news of Easter.

He is risen, indeed!

What difference does the resurrection of Jesus actually make in your life?

Share the Paschal Greeting with people today, whether in person, via Zoom, or on the phone. Say, “Christ is risen!” so that the other can respond “He is risen, indeed!” If you have children or grandchildren, nieces or nephews, you might want to teach them this traditional Easter greeting.

Lord Jesus, you are risen! You are risen, indeed! What marvelous good news!

I praise you today as the one who died so that I might live.

I praise you as the one who was raised so that, one day, I too might be raised.

I praise you for your victory over sin, suffering, and death.

I praise you for giving us hope that endures.

I praise you for being the One who makes all things new.

All praise, glory, and honor be to you, Lord Jesus, the Risen One. Amen.

Christ is Risen! Really! Christ is risen! He is risen, indeed! For centuries, Christians have used this so called…
Responding to the Authority of Jesus: Not Really Welcome… It’s easy for those of us who follow Jesus to welcome him into our lives…
The Third Word: Woman, Here is Your Son When we think of the crucifixion of Jesus from the perspective of his mother, our…
Here’s a Wild Ride! Sometimes faith in God can be comforting and reassuring. Sometimes, however, it can be a…