How Tasty Are You?

“Salt is good; but if salt has lost its taste, how can its saltiness be restored? It is fit neither for the soil nor for the manure pile; they throw it away. Let anyone with ears to hear listen!”

Jesus calls his disciples to be salt, tasty salt. In addition to functioning as a preservative in the world of Jesus, salt helped other things to taste better. True disciples of Jesus aren’t killjoys who make the world less interesting, less beautiful, less true, and less zesty. On the contrary, we help the world to be more what God intended it to be in the first place: more interesting, more beautiful, more true, and more zesty.

During my years as a student at Harvard, The Tasty was a familiar friend in Harvard Square. For over 80 years until its unfortunate closure in 1997, The Tasty served thousands of Harvard students and other residents of Cambridge, Massachusetts, though it was only 210 square feet in size. If you’ve seen the film Good Will Hunting, then you’ve seen The Tasty. That’s where Will (Matt Damon) and his girlfriend Skylar (Minnie Driver) had their first kiss. 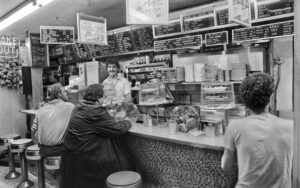 The Tasty Sandwich Shop, a diner restaurant in Cambridge. Photo by Davidputhenry in WikiCommons.

I always thought The Tasty was a clever name for a diner, for obvious reasons. If you’re going to stop in for a burger and fries, you want them to be, well, tasty. According to Merriam-Webster, “tasty” means “having a marked and appetizing flavor.” That pretty much sums up what I’d like in a meal.

And that also sums up who we’re to be as disciples of Jesus, though not literally, of course. In Luke 14:34-35 Jesus says, “Salt is good; but if salt has lost its taste, how can its saltiness be restored? It is fit neither for the soil nor for the manure pile; they throw it away. Let anyone with ears to hear listen!” Here Jesus implies what he makes clear in Matthew 5:13 when he says to his disciples, “You are the salt of the earth.”

Commentators on the Gospels point out that salt had two primary functions in the world of Jesus. It was used both to preserve food and to season it. Faithful disciples of Jesus will serve a similar role in the world, both preserving what is good and enriching the world’s “flavor.” Our role in the world isn’t so much to be tasty as it is to help other things to become tastier. True disciples of Jesus aren’t killjoys who make the world less interesting, less beautiful, less true, and less zesty. On the contrary, we help the world to be more what God intended it to be in the first place: more interesting, more beautiful, more true, and more zesty.

I think the analogy of The Tasty in Harvard Square works here. It was, after all, a tiny fixture in the Square. From the size of its footprint, one might have assumed its influence was equally minuscule. But, in the experience of thousands of students and thousands of town residents, The Tasty was one of the most significant institutions in the Square. Because it lived up to its name, serving tasty food, its impact far exceeded its size.

So it can be for those of us who follow Jesus. We may not be “big” people, we may not have obvious influence and power, but if we are living out our faith in the world, we will make a difference for God’s kingdom that truly matters.

When you think of Christians who are truly salt in the world, who comes to mind?

In what ways do you help to preserve what is good in the world?

In what ways do you help the world to be “tastier”?

Do something today that will help your part of the world to be “tastier.”

Help me, Lord, to be “salty” today. Help me to make a difference for your kingdom in my part of the world. May I enrich the experience of others as I go about my day. And may it all be for your glory. Amen.

Find all Life for Leaders devotions here. Explore what the Bible has to say about work at the unique website of our partners, the High Calling archive, hosted by the Theology of Work Project. Reflection on today’s Life for Leaders theme can be found here: What Are You Supposed to Enhance With Your Saltiness?

Prayers for Workers: When You’re Afraid You Might Lose Your… God’s grace is rich beyond measure. God’s grace is there for you in every circumstance.…
God Knows You and Values You In the first century A.D., sparrows were a dime a dozen. Yet, according to Jesus,…
Leadership Wisdom – Who You See is Who You’ll Be What does it mean that the pure in heart will “see God”?
I Thank God for All of You! Today, April 1, 2020, is the fifth anniversary of the first edition of Life for…

One thought on “How Tasty Are You?”