I’m writing during the final days of Christmastide 2021-2022. In this season of the year, I’m continuing to reflect on the significance of the birth of Jesus as revealed to us in the Gospel of Luke. As I do this, I’m seeing in new ways how the Christmas story encourages older adults.

Of course, the birth of the Savior encourages all human beings, no matter their age. Jesus came to save young and old, weak and strong, male and female, and all humanity in our rich diversity. Moreover, the fact that God became human as a baby is an extraordinary affirmation of human life, beginning with the youngest among us.

During our celebrations of Christmas, we rightly focus on the birth of the baby Jesus, born in a stable and laid in a manger. With the shepherds, we “visit” the place where Jesus was born, filled with joy and wonder. We ponder the astounding truth that a vulnerable, helpless baby was actually “God from God, Light from Light, true God from true God, begotten, not made, of one being with the Father,” to use the timeless words of the fourth-century Nicene Creed.

The leading star of the Christmas story, if you will, is a baby. This is both true and wonderful. But I am struck by the fact that among the featured co-stars are older adults. The biblical text underscores the fact that several of them are quite old. Their age is vital to the story.

The story of Jesus’s birth is framed by older people. It begins and ends with those who well into the third third of life. As the story commences in Luke 1, the main characters are Zechariah and Elizabeth. They are introduced to us as people who “were getting on in years” (Luke 1:7). A few verses later, Zechariah said to an angel, “I am an old man, and my wife is getting on in years” (Luke 1:18). Despite their old age, however, Zechariah and Elizabeth conceive a son to whom Elizabeth gives birth. We know him as John the Baptist. 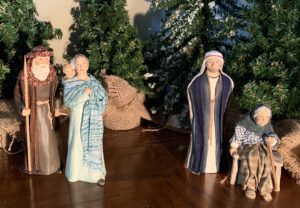 Figures from my wife’s nativity set, from the left: Zechariah, John, Elizabeth, Simeon, and Anna

Zechariah and Elizabeth are the major characters in Luke 1 (as well as Mary, the mother of Jesus). Luke 2 begins with the birth of Jesus and the visit of the shepherds. This part of the Christmas story is familiar and beloved. But then we come to a part of the story that is often overlooked. Jesus’s parents brought him to the temple to present him to the Lord and so that Mary could be purified according to the Jewish law. While in the courts of the temple, the holy family encountered two people, Simeon and Anna.

Both Simeon and Anna praised God because of the child, Jesus. Simeon recognized him as God’s “salvation” as well as “a light for revelation to the Gentiles” (Luke 2:30-32). In addition to praising God, Anna also spoke about the baby Jesus “to all who were looking for the redemption of Jerusalem” (Luke 2:38). After the blessings of Simeon and Anna, the holy family returned to Nazareth, where Jesus “grew and became strong” (Luke 2:39-40). Thus ends the story of Jesus’s birth in Luke, with the key contributions of Simeon and Anna.

Luke underscores the godliness of both Simeon and Anna. Simeon a “righteous and devout” man, received a revelation from the Holy Spirit who “rested on him” (Luke 2:25). Anna is identified as a “prophet” who worshiped and prayed in the temple “night and day” (Luke 2:36-37). But in addition to these admirable qualities, Luke emphasizes the ages of both Simeon and Anna. He implies that Simeon is old by noting that he is close to the time of his death (Luke 2:26, 29). Concerning Anna, Luke tells us that she “was of a great age” (Luke 2:36). The Greek reads more literally, she was “advanced in many days.” Luke reveals that Anna was eighty-four years old (Luke 2:37). That’s just four years more than the average life expectancy for a woman in the United States today. But it’s many years more than the life expectancy for a woman in first-century Judea. That’s why Luke can refer to Anna as someone “of a great age.”

So, the Christmas story begins and ends with older adults, Zechariah and Elizabeth at the beginning, Simeon and Anna at the end. This in and of itself is striking. It shows that older people figure prominently in God’s activity on earth. It rejects any thought that people become irrelevant or unhelpful in God’s plans just because they are advanced in years. The inclusion of older people in the nativity narrative is a great encouragement to those of us who are in the third third of life.

But we should also recognize that the older adults in this story are not just “extras” in God’s drama. Extras, as you probably know, are people who show up in movies in the background. They aren’t usually actors and they don’t contribute in any substantial way to the action. They just stand or sit and allow themselves to be filmed. Zechariah, Elizabeth, Simeon, and Anna aren’t extras. On the contrary, they play substantial co-starring roles.

Learning from Simeon and Anna

Today, I’m struck especially by the roles that Simeon and Anna play, not just in the overall Christmas story, but specifically in the lives of Mary and Joseph. Put yourself in the shoes of Jesus’s parents for a moment. They knew from the angels that visited them that their son would be the Savior. They heard from the shepherds about some angelic visitors. So Jesus’s parents surely had baseline confidence that God was with them and their baby.

But I can imagine they also felt overwhelmed, uncertain, and scared. How in the world could they raise the Son of God? Would God help them? Was God still with them? (These concerns would only have been amplified when they went to Egypt to escape from the murderous King Herod.)

Then, as Mary and Joseph were in the temple courts on their way to fulfill the law’s requirements, they encountered two older adults, two people who radiated spiritual maturity, passion, and wisdom. Both of these older people affirmed the unique calling of their child. Both praised God for Jesus’s life and future work. Simon “blessed” the holy family directly, while Anna’s praise was surely a blessing to them as well (Luke 2:34). The fact that Simeon and Anna were old – in a culture that tended to respect older people and value their wisdom – would have accentuated their impact on Mary and Joseph. The young parents would have been reassured that God was with them and their child, and that their parenting efforts would one day prove to be fruitful.

The example of Simeon and Anna reminds us of the power of intergenerational relationships, even in a culture like ours in which ageism is a problem. Though some younger folks may not pay attention to what older folks think and feel, many from the rising generations do. For example, when I was just beginning my work as senior pastor of Irvine Presbyterian Church, I worried about whether I was doing a good job. I felt insecure and uncertain. But there were older people in my congregation who intentionally affirmed me. They let me know how much they valued and loved me as their pastor. Their effort to build me up mattered. And the fact that they were older and had had so many church experiences gave me confidence that God was indeed working in and through me.

Now, I’m on the other side of the age equation. Though I hope I’m not like Simeon, soon to die, and though I have twenty years until I reach Anna’s age of 84, I’m well aware that I have entered the “third third” of life. Luke would no doubt comment that I am “getting on in years.” I have the diminishing white hair and the ample white beard to prove it. In this season of life, I have felt a strong calling to be an encourager of others, especially (but not only) those who are young. I have sought to pay attention to how I might affirm them as well as to what the Holy Spirit might want me to say to them. I have found that my affirmation matters to younger folk. Increasingly, they are even seeking my wisdom, which I find both gratifying and humbling. It is such an amazing privilege to be able to build up and support younger folks in their life and leadership.

In conclusion, let me reiterate a couple of crucial ways in which the Christmas story encourages older adults:

2 thoughts on “How the Christmas Story Encourages Older Adults”