Keeping Christmas Well as an Ebenezer

Then Samuel took a stone and set it up between Mizpah and Jeshanah, and named it Ebenezer; for he said, ‘Thus far the LORD has helped us.’”

Ebenezer Scrooge is one of the most beloved and familiar characters associated with Christmas. His story, found in Dickens’s A Christmas Carol, reminds us to live life in joyful service to others. The name “Ebenezer” comes from a Hebrew word that means “help-stone.” An Ebenezer helps people remember God’s grace. We all need such “ebenezers” in our lives. And, like Ebenezer Scrooge at the end of his tale, we have the chance to be “ebenezers” for others, living reminders of the good news of Christmas.

Today’s devotion is part of the series Keeping Christmas Well.

In yesterday’s devotion we began a series I’m calling Keeping Christmas Well. Inspired by Charles Dickens’s classic character Ebenezer Scrooge in A Christmas Carol, we are learning from Scripture what it means to truly keep Christmas well. 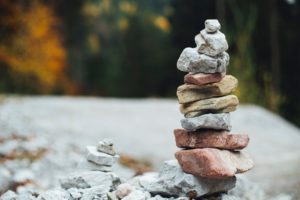 In English, Ebenezer is a man’s name. Today it is quite uncommon, apart from its association with A Christmas Carol. In the nineteenth century the use of the name “Ebenezer” was far more common. So, for example, in 1840, three years before Dickens wrote A Christmas Carol, a man named Ebenezer Elliott, who identified himself as a “Corn-Law Rhymer,” published a book of his poetical works (Edinburgh: William Tait, 1840).

The name “Ebenezer” is not original to the English language. In fact, it is an Anglicized version of a Hebrew noun, which is itself composed of two Hebrew words. In 1 Samuel 4:1, for example, the Israelites camped at a place called Ebenezer. This name is a combination of the Hebrew word for stone (eben) and the Hebrew word for helper (‘ezer). Thus, an ebenezer (literally, ha-eben ha-‘ezer) would have been a stone that offered some sort of assistance. In 1 Samuel 7:12, the judge Samuel sets up a stone as a monument in remembrance of God’s special help. It was a “help-stone” that reminded the Israelites of God’s care. It was rather like those little monuments you find along highways throughout the United States. They commemorate some event long past, helping us to remember what we would otherwise forget.

Charles Dickens, though not orthodox in his Christian faith, was certainly familiar enough with the Bible to have known the meaning of the name Ebenezer. Given this knowledge and his attention to character names, it’s likely that he chose the name “Ebenezer” quite intentionally. Ebenezer Scrooge was not only a man with a “squeezing, wrenching, grasping” character, which scholars surmise was the meaning of “Scrooge.” He was also to serve as a monument for the readers of A Christmas Carol. Dickens intended Ebenezer Scrooge to remind us of things we ought to not forget, lest we end up like Jacob Marley and the other spirits who walked the earth in sorrow, dragging the heavy chains they forged in life.

Do you have “Ebenezers” in your life? Are there people, perhaps even fictional characters like Ebenezer Scrooge, who remind you to be generous and joyful? Do you have physical objects, like Samuel’s “help stone,” that remind you of God’s faithfulness in the past? When life gets crazy, when work is a pressure cooker, when you feel overwhelmed or despairing, where do you turn to be reassured of God’s grace and care?

Or maybe you could be an “Ebenezer” for someone else, a reminder of God’s love and grace. When people see you, do they see God’s goodness alive in you? How might you live in this time of year, even in the midst of a pandemic, in a way that embodies the good news of Christmas, the news that God is indeed with us through Jesus? You can keep Christmas well by living as an “Ebenezer,” helping others to remember God’s grace in Jesus Christ.

In the last couple of paragraphs, I asked a bunch of questions. Pick one or two and reflect upon them.

If you do not have an “Ebenezer” in your life, a physical object that helps you remember something important, see if you might identify one. It could be just about anything. For example, a friend of mine thinks of God’s care for her every time she sees an owl (in nature or in some artistic representation).

Gracious God, thank you for all the reminders you give us of your goodness. Thank you for people, objects, places, smells, songs, and so much more than can help us remember your grace. Even more, thank you for the grace represented by these “Ebenezers.”

As I live my life today, may I be such an “Ebenezer” for others, an embodied reminder of your grace. May I live with joy and generosity that reflects the true meaning of Christmas. Amen.