Zacchaeus stood there and said to the Lord, “Look, half of my possessions, Lord, I will give to the poor; and if I have defrauded anyone of anything, I will pay back four times as much.’”

Ebenezer Scrooge, having been transformed supernaturally, began to keep Christmas well by making amends, righting the wrongs he had done earlier in life. His story is rather like that of Zacchaeus in the New Testament, whose life was turned around by his supernatural encounter. Zacchaeus didn’t meet up with ghosts, however, but with Jesus. When we are transformed by his grace, we too will seek to make right what is wrong, both in our personal lives and in the wider world.

Today’s devotion is part of the series Keeping Christmas Well.

At the beginning of A Christmas Carol by Charles Dickens, Ebenezer Scrooge is not the sort of person I’d like to be. According to Dickens’s classic description, Scrooge was “a tight-fisted hand at the grind-stone, Scrooge! a squeezing, wrenching, grasping, scraping, clutching, covetous, old sinner! Hard and sharp as flint, from which no steel had ever struck out generous fire; secret, and self-contained, and solitary as an oyster.” Ouch! I expect you don’t want to be like Scrooge, either. He was also wealthy, with riches earned in many cases by harshly treating those less fortunate than he was. Yet, because of the intervention of supernatural spirits, Scrooge was ultimately transformed. 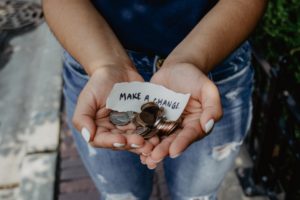 The final chapter of A Christmas Carol, Stave V, chronicles the effect of this transformation. It begins this way: “YES! and the bedpost was his own. The bed was his own, the room was his own. Best and happiest of all, the Time before him was his own, to make amends in!” In his new condition, not only would Scrooge be able to live joyfully, but also he would have a chance to “make amends,” to make right what he had done wrong, to treat well those he had mistreated, to care for those in need whom he had once scorned. The bulk of Stave V shows some of the ways that Scrooge did indeed make amends, giving generously to the poor and showing special care for his employee, Bob Cratchit, and Bob’s family.

As I read the final stave (chapter) of A Christmas Carol, I’m reminded of another man whose life was rather like that of Ebenezer Scrooge. Zacchaeus, the first-century Jewish tax collector, had made his riches by taking advantage of those from whom he collected taxes, charging them more than was necessary or just. Like Ebenezer Scrooge, Zacchaeus valued financial gain above all.

And, like Ebenezer Scrooge, Zacchaeus was transformed by supernatural intervention. He was not visited by fictional ghosts, however, but by Jesus, the Incarnate Son of God. As a result of this visitation, Zacchaeus realized that he had been living wrongly and he promised to make amends: “Look, half of my possessions, Lord, I will give to the poor; and if I have defrauded anyone of anything, I will pay back four times as much” (Luke 19:8).

You and I can keep Christmas well by making amends. I’m not suggesting that, like Scrooge and Zacchaeus, we have become rich by defrauding others, though we ought to make sure that our work is shaped by God’s justice. But I expect that many of us have people in our lives whom we have wronged in some way, and who have yet to receive appropriate restitution. Perhaps, like Scrooge and Zacchaeus, we have been less generous than we ought to be and it’s time to make amends by sharing our blessings with others. Perhaps we can participate in making right larger wrongs in our society, addressing systemic unfairness as a way of seeking divine justice. Perhaps some of our relationships with friends or family members have frayed, and we can reach out in order to reconcile.

Like Zacchaeus, we are enabled and inspired to make amends not because of something inherently good in ourselves; rather, we are transformed through an encounter with Jesus Christ. When we grasp the wonder of his grace, the fact that he made amends on our behalf through offering his life for us, we are moved and set free to become people of generosity and justice. You can keep Christmas well by making right what is wrong, giving to others even as God has given to you in Christ.

As you think about the examples of Scrooge and Zacchaeus, what happened to them such that they freely and joyfully sought to make amends?

Can you think of a time in your life when you intentionally made amends because of something you did wrong? (I think, for example, of the time I hit a baseball into my neighbor’s window. I made amends by earning money to pay for a new window.)

Do you have any relationships in need of your effort to make amends and/or to foster reconciliation?

How might you participate in making amends for broader social injustice?

Ask the Lord how you might do something tangible in order to right a wrong. Then, do whatever God puts on your heart.

Help me, Lord, to see where and how I can make amends. Show me where I can and should reach out in humility, to offer an apology, to make right what was wrong. Give me the courage to do this as an expression not of guilt but of gratitude for all you have done for me.

Show me, Lord, how I can participate in righting societal and even global wrongs. Help me to do my part, as you lead, in response to your grace. Amen.