Blessed are the peacemakers, for they will be called children of God.

Conflict and division abound in the church as it does in the wider world. Arguably, the church not only looks like the culture at large, but even worse, the church appears to be the source of much of that polarization and combativeness. How can the church, which is composed of people from “every tribe and tongue and people and nation,” behave differently?

“As (Jesus) approached Jerusalem and saw the city, he wept over it and said, ‘If only you, even you, had only known on this day what would bring you peace – but now it is hidden from your eyes’” (Luke 19:41-42, NIV). 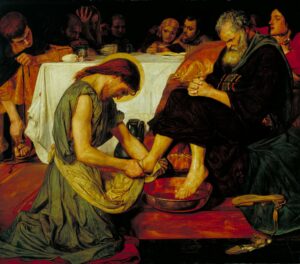 It’s deeply ironic that Jesus would lament over Jerusalem in this way. By its very name, Jerusalem was to be the “City of Peace.” If there ever was a place where people should know how to be peacemakers, Jerusalem should have been it. And yet it wasn’t. Not in Jesus’ day. And not in our day.

For those of us who claim to follow Jesus, it would be easy to think better of ourselves. After all, we know “what would bring you peace.” We have put our faith in Jesus who is the “Prince of Peace.” We haven’t made the mistake – made in Jesus’ day and in ours – of rejecting the one who “comes in the name of the LORD.” So, surely that qualifies us as peacemakers. Or does it?

Jerusalem is not just a geographic location but a metaphor for God’s dwelling – God’s city. In the latter sense, Jerusalem has often been a metaphor associated with the church, the community of Jesus’ followers. As the writer of the Letter to the Hebrews says, we “have come to Mount Zion, to the city of the living God, the heavenly Jerusalem. You have come … to the church of the firstborn, whose names are written in heaven” (Hebrews 12:22-23, NIV).

As citizens of the heavenly “City of Peace,” as followers of the “Prince of Peace,” shouldn’t peacemaking be part of our foundational identity? Certainly that’s what Jesus suggests in today’s Beatitude. Peacemakers will be called “children of God,” because they share a family resemblance with the God they claim as their Father.

And yet conflict and division abound in the church as it does in the wider world. Arguably, the church not only looks like the culture at large, but even worse, the church appears to be the source of much of that polarization and combativeness. How can the church, which is composed of people from “every tribe and tongue and people and nation,” behave differently?

If it’s any consolation, Jesus faced the same issue in his day. His inner circle – the twelve apostles – were an unlikely (and incompatible) group of people. It’s helpful to look at two in particular: Matthew (The Tax Collector) and the other Simon (The Zealot). Historians tell us that these two people belonged to two diametrically opposed political camps. As a tax collector for the Roman Empire, Matthew would have been a supporter and collaborator with the Empire. As a Zealot, Simon was part of a political group that advocated armed revolution against the Empire. It is astonishing that these two men are in the innermost circle of Jesus’ followers given their backgrounds. What is even more astonishing is that they were in that circle together.

How did Matthew and Simon learn to live and work together “in unity”? What might we learn from their experience that would help us today?

To begin with – and most importantly – they both had to acknowledge Jesus as Lord. That meant that they had to check their political and religious identities at the door. (It’s worth noting that in Jesus’ day – as is becoming more so in ours – religion and politics were inseparable.) Whatever their political commitments, Jesus demanded ultimate allegiance. After all, that’s what “Jesus is Lord” means. Neither being against Rome nor being for Rome was the ultimate test. Loyalty to Jesus as Lord of All was.

Next, Jesus called them to learn to love one another. Surely that wasn’t easy for Matthew and Simon. As Elton Trueblood once observed, “religious enemies are the fiercest there are.” I wonder whether they looked at one another that way when Jesus said that they must love their enemies. Or how it felt to them when they saw Jesus washing the other’s feet. And commanding them to do the same.

It couldn’t have been easy for them. It won’t be easy for us. It’s not for me. What makes it worse is that following Jesus develops in us strong convictions about what is right and what is wrong. How can I be faithful to Jesus and yet love my brother or sister who has diametrically opposed ideas of what that faithfulness looks like?

I wish there were easy answers. I take comfort in the likelihood that Matthew and Simon faced the same issues. They faced it once they became Jesus’ followers. And they faced it again as they became leaders of that community after Jesus’ departure. So, what held them together?

In a word, I believe it was humility. That humility included a basic recognition of the limits of their knowledge. As the Apostle Paul famously wrote, “we know only in part” (1 Corinthians 13:9, NRSV). Being regularly reminded that we are not God and that our understanding is imperfect and incomplete is a good thing. Further, that humility was not merely a matter of the mind and heart, but a practically embodied reality in the life of the church. Jesus washing the disciples’ feet is the seminal example. Finally, I’m struck by words on this issue by those closest to Jesus. Both James and Peter summarized healthy relational dynamics within the early church in exactly the same way: “God opposes the proud but gives grace to the humble” (1 Peter 5:5, James 4:6, NRSV).

Peacemakers – those who are the true children of God – are characterized by humility, not pride.

Who raises your hackles in your local church? Why might that be? What might you do about it?

Find someone in your local church with whom you have differences politically or theologically. Pray for them in the coming week. Look for an opportunity to connect with them over a cup of coffee and get to know them as persons.

We call you our Lord and our God, for that is who you are. And yet we treat other people and other things as greater than you. Our allegiance is compromised. We trust in other gods and other lords.

Find all Life for Leaders devotions here. Explore what the Bible has to say about work at the unique website of our partners, the Theology of Work Project. Commentary on today’s Life for Leaders theme can be found here: “Blessed Are the Peacemakers, for They Will Be Called Children of God” (Matt 5:9)