Five years ago, Tod Bolsinger came out with his best-selling book, Canoeing the Mountains: Christian Leadership in Uncharted Territory. Leaders throughout the United States and, indeed, throughout the world, read this book with eagerness and appreciation. Why? To be sure, they gladly learned from Tod’s lucid presentation of adaptive leadership and his down-to-earth experience as a pastor learning how to lead adaptively.

But, what initially drew leaders of churches and other organizations to this book was its bold assertion that we are now leading in “uncharted territory.” Using the story of Lewis and Clark as a gripping illustration, Tod observed that leaders today are, in a matter of speaking, “canoeing the mountains.” Like Lewis and Clark, we’re leading in an unfamiliar land and, if we’re honest, we’re not at all sure how to do it. Thousands upon thousands of mountaintop canoers bought Tod’s book partly because he named their reality. He identified their pain point. They were trying to lead in uncharted territory, canoeing over mountains they had never anticipated.

All of that happened years before the coronavirus pandemic. If we were once in uncharted territory trying to canoe the mountains, now we’ve lost our canoes and are stuck wearing blindfolds. (Well, okay, they’re really face masks. But you get the point.) The challenge facing leaders today just got way harder, way less predictable, and way more exhausting. Now our question is not only how are we going to lead in uncharted territory, but also how are we going to survive in the process? How are we going to hang in there? How might we even grow stronger and wiser in our leadership in the midst of a pandemic? 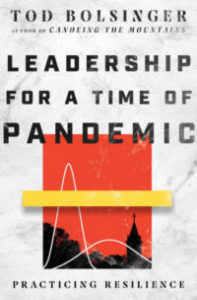 Once again, Tod Bolsinger is here to help. His next full-length book, Tempered Resilience: How Leaders are Formed in the Crucible of Change will be published by InterVarsity Press in six months (November 2020). By the time we get to November, we who lead will be desperate for wisdom on resilience, that’s for sure. But, in the meanwhile, Tod and his publisher have thrown us a lifeline. Today, in fact, InterVarsity has published a short e-book written by Tod. You can buy Leadership for a Time of Pandemic: Practicing Resilience right now from Amazon and other sellers for $3.99.

In this book, Tod summarizes some of the core adaptive leadership principles from Canoeing the Mountains. If ever we faced adaptive challenges that require adaptive leadership, now is that time. So even if you’ve read Canoeing, you’ll appreciate the first part of his new book. It’s a timely reminder.

But then Tod gives us a preview of coming attractions, so to speak, with a chapter entitled “How are Resilient Leaders Formed?” Without giving away too much in this review, let me say that Tod’s answer has to do with stress, deliberate practices, listening, and looking. If these were needed in the “Before COVID-19” world, they are essential in today’s “COVID-19” reality, not to mention our “After COVID-19” future. Whatever else leaders will need in the months and years ahead, resilience will be a top requirement. We’re going to need enduring strength, deeper wisdom, longer vision, and abiding peace if we’re going to lead well in the long haul that lies before us.

Leadership for a Time of Pandemic reminds me of appetizers you get sometimes at weddings. Theoretically, they’re meant to whet your appetite for the major meal that’s yet to come. But they’re substantial and delicious, almost like a whole meal by themselves. Tod’s new e-book is such an appetizer. It gets our mouths watering for the release of Tempered Resilience in November, but it also satisfies our hunger right now. Leadership for a Time of Pandemic will provide nourishment so we can keep going, serving our people as adaptive leaders while we grow in our own resilience.

P.S. You can buy Leadership for a Time of Pandemic: Practicing Resilience right now from Amazon for $3.99. If you don’t own a Kindle, not to worry. You can read this book on your computer or smartphone, using a Kindle app or the Kindle platform on the Amazon website.

P.P.S. If you’re interested in more of Tod’s resources, check this page. Also, you can watch the webinar Tod did for the De Pree Center on Christian Innovation in Uncharted Territory.

P.P.P.S. Let me confess that, though my appreciation of Leadership for a Time of Pandemic is genuine – I just read it an hour ago – I do have every reason to be biased in Tod’s favor. He is a Senior Fellow of the De Pree Center, over which I am the Executive Director. He is also the Vice President at Fuller who is over the Leadership Formation Division, which makes him my boss. And he is a dear friend. (Between you and me, I sure am glad I genuinely like Tod’s books! Otherwise it would be rather awkward, don’t you think?)

Conversing Podcast: Tod Bolsinger on Leadership Formation We have an honest conversation about what it's like to struggle with mental health at…
Books by Tod Bolsinger
"Standing by Our Workers in Pandemic Time," by David Gill David Gill has been thinking and writing about faith and work for as long as…
A Review of Roy Goble’s Salvaged: Leadership Lessons… The first few words of Salvaged: Leadership Lessons Pulled from the Junkyard (NavPress, 2019) got…