Winter in wine country can be confusing.  It’s cold and rainy.  The vines are cut back and look like dead sticks.  But, in the midst of this, millions of bright yellow flowers that sway on tender bushes carpet the spaces between the dormant vines.  It’s mesmerizing to contemplate the paradox.  As a cover crop, the delicate mustard plant has many lessons for us as leaders.

According to legend, Franciscan missionaries scattered the tiny seeds as they wandered around northern California carrying a bag of seeds on their back with a tiny hole in the bottom.  As a perennial, mustard may lie dormant for many years and only spring forth under certain conditions and carpet the hillsides.  In the vineyards, whether the mustard is intentionally planted or grows wild, a good vineyard manager relies on its many benefits as a natural pesticide, nitrogen source, and sponge!

It turns out that the mustard plant has high levels of glucosinolate compounds which act as a biofumigant, especially suppressing the nematode population in the soil. While some nematodes are beneficial in the soil, there are others that feed on the roots of plants, weakening the plant and often causing its death. Controlling these nematodes requires some kind of fumigant, which can be accomplished naturally by planting mustard during the wet winter months when the nematode population is increasing.

Once the winter rains have stopped and just before bud break, tractors will roll between the rows of vines, tilling the mustard into the soil.  As the green plant material dies, it adds much-needed nitrogen to the soil.  Nitrogen is a major component of chlorophyll and amino acids, both of which are necessary for plant growth.  When the soil has enough nitrogen, the vine will flourish.

Finally, mustard plants, or any other cover crop, suck up a lot of water.  A vine that has too much water will produce flabby grapes without the concentration of flavor necessary to make good wine.  During the rainy season, cover crops serve as a sponge, soaking up extra water that sits close to the surface of the soil, protecting the vine from getting too soggy.

As leaders, when we find ourselves in a winter season, we must pay attention to the soil of our life–that mostly forgotten and sometimes boring part of our life that sustains future flourishing.  What cover crop will we plant?  Often, we plant even as we weep, wondering if there will ever be another harvest.

Not too long ago, I was in a winter season.  All my fruitful limbs had been chopped off and I was no longer busy or engaged in something that seemed important.  People stopped reaching out and it felt like I had died, but no one had come to my funeral.  Inasmuch as I was not entirely aware of the principle of a cover crop back then, I can see, in hindsight and in God’s grace, I planted a cover crop of hope.  Tiny seeds that fell out of a heavy bag with a hole in the bottom sprang up as hopeful flowers to kill the pests in my soul, sop up the deluge of sadness, and plow health deep into my life.

Some of the seeds I sowed were spiritual practices of lament…silence…solitude…  I prayed the hours because I had nothing else to do.  I journaled and gardened.  I cooked and read.  I got therapy.  All along, I continued to work, but not in the same way.  It felt different.  I was learning a new rhythm.  Old pests of perfectionism were being poisoned.  Healthy, embodied practices were nourishing my soul and, every now and then, I would notice my sadness was getting sucked up into hope.

The beauty of sowing in tears is the inevitable harvest it produces.  Think of it–a cover crop is sown during a difficult season for a short period of time in order to bring health to the foundation of growth.  Even, and maybe especially, in the death of the cover crop is found the most valuable treasure–healthy soil that supports the next fruitful harvest.

If you ever find yourself in a winter season of life or leadership, cut a hole in the bottom of that heavy sack and let the tiny seeds fall to the ground to become a cover crop of hope. 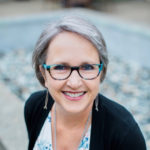 Susie Lipps is Fuller’s Bay Area director for Strategic Engagement. She is an entrepreneur, most recently launching Conversations in the Vineyard, which marries two of her passions: leadership and vineyards. Susie loves good coffee, good wine, and the great conversations that inevitably accompany them.

Living Fully, Living Gratefully: Giving Thanks in Hard Times I have known Christians who confuse genuine gratitude to God with denial of life’s challenges…
Rhythms of Work by  Susie Lipps National Partnerships Consultant Fuller Theological Seminary © Copyright 2020 De Pree Center.…
Working Hard . . . Hardly Working Ephesians 4:28 teaches us to work hard.. we also need to rest.
Could We Be Working Way Too Hard? May God teach us how to build our lives according to God’s own rhythm of…