Ruth the Faithful: A Survival Story

As I was recently re-reading the book of Ruth, I found myself remembering similar stories I have encountered in my own life. I thought especially of my husband, who is a second-generation immigrant. His parents were ranchers in his home country. But the countryside had become unsafe, and economic instability meant that their work was no longer able to provide for their growing family. Like Ruth, his mother and father were no longer at home in their own land. And so they took a leap of faith and moved to a new country, where the customs, culture, and language were different.

When they first moved to California, my father-in-law got a job as a janitor. His job was to literally clean up the mess that others left behind. (While Ruth wasn’t exactly cleaning up messes, she was indeed plucking up what was left behind by the other workers in the fields where she gleaned.) Because they had just moved to a new country and did not have financial or social security, my husband’s parents ended up doing hard, manual labor, often at the heels of others. They faithfully carried on for many years, working relentlessly to provide a hopeful future for their children. Now, almost three decades later, my husband and his four brothers have all gone to college, and three of the brothers have pursued masters or doctoral level studies. Three of them are married (or engaged) and starting families of their own. The faithful perseverance of their father and mother has resulted in unpredictable flourishing for their family. The choices that my husband’s parents made will be remembered from generation to generation. Theirs is a story of God’s covenant faithfulness in the face of nearly insurmountable challenges and uncertainty. 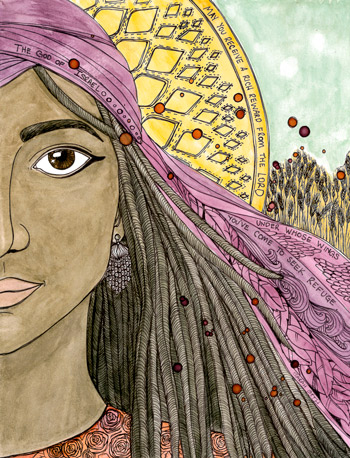 In line with the Patriarchs of the faith who left their lands of birth to follow God, and not unlike the faithful actions of my father-in-law, Ruth’s story also begins with migration. The story opens to find that Naomi’s husband and two sons have died, leaving her and her daughters-in-law as widows. Ruth and Orpah have two options: return to their hometown in Moab or travel to Bethlehem with Naomi. Biblical scholars have pointed out that neither option was a safe choice for Ruth. In Moab, she may have been rejected for having married an Israelite. In Bethlehem, she may have been rejected because she was not ethnically part of the covenant community, Israel. Yet Ruth’s fierce loyalty to her mother-in-law, Naomi, compels Ruth to take a leap of faith and move to Bethlehem. Ruth says to Naomi, “Do not press me to leave you or to turn back from following you! Where you go, I will go; where you lodge, I will lodge; your people shall be my people, and your God my God” (Ruth 1:16).

Ruth’s faithfulness to Naomi is central to this story, yet the book of Ruth is even more so about God’s faithfulness, which manifests itself through Ruth’s actions. Ruth faithfully follows Naomi back to Bethlehem. She faithfully provides food for Naomi and for herself by gleaning in the fields—the act of picking up grains that have been left behind by harvesters. And she faithfully and boldly approaches Boaz, Naomi’s deceased husband’s blood relative, to ask for a marriage proposal.[1] This final act of fierce faithfulness enables Naomi’s bloodline to continue for many more generations. And at the end of the book of Ruth, we find that her genealogy leads to the birth of David. Ruth’s acts of faith are used by God to carry on the messianic line—a lineage ultimately leading to the birth of Jesus.

What amazes me about the Ruth’s story is that God chose a woman who was a widow and an immigrant to be the embodiment of God’s steadfast faithfulness. Neither women, nor widows, nor immigrants had many rights or social capital in the patriarchal society of the ancient Near East. Yet it is through the powerless, the outsider, the unexpected character that God chose to reveal God’s covenantal faithfulness. I have witnessed the same to be true for my father-in-law and many others whose families carry legacies of hard work and perseverance in the face of adversity.

As we are approaching Advent, I am also reminded of the migrations that happen in the birth narrative of Jesus. Not only did Mary and Joseph migrate to Bethlehem to be registered before Jesus was born (Luke 2:1-5), but they also fled to Egypt after Jesus’s birth when Herod sought to kill him (Matt 2:13-15). The Church’s collective stories are filled with migration or movement for the sake of survival. Time and time again, we see God’s faithfulness prevail through these human acts of perseverance. So this Advent season, I celebrate the story of Ruth, who reminds me of the faithful actions in Scripture that led to the birth of the Messiah, as well as the faithful actions of those in my life today that led to the flourishing of my new family.

FOOTNOTES
[1] Ruth visits Boaz in the middle of the night and lies at his feet. When he awakens, she says to him, “I am Ruth, your servant; spread your cloak over your servant, for you are next-of-kin.” (Ruth 3: 9). Some biblical scholars interpret this act as asking for a marriage proposal, as the cloak signified the securement of a wife in ancient Near Eastern marriage customs. Cf. “Ruth 2: Ancient Near Eastern Background,” Dictionary of Old Testament: Wisdom, Poetry, and Writings (Downers Grove: IVP Press, 2008), 691. 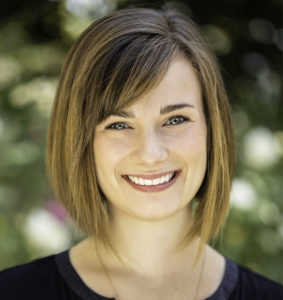