As I’ve given more of my time to leading the De Pree Center’s Third Third Initiative, I’ve been paying increasing attention to the issue of ageism. To help me stay informed on the latest developments, I’ve set a Google Alert that lets me know each time the word “ageism” shows up on a significant page of the web. Every day I’ll be informed of several new instances of ageism in tech, sports, business, entertainment, or you name it. Stories come, not just from the United States, but from all over the world.

A recent Google Alert caught my eye because it was from a Middle Eastern publication: Dear therapist: I’m facing ageism in the workplace – News | Khaleej Times. (Khaleej Times is published in Dubai.) I clicked on the link, expecting to find an article featuring some older adult who is experiencing workplace ageism. But what I found surprised me. It said, “I’m facing ageism in my workplace. I’m the youngest employee in a professional environment that seems to be filled with older staff and I feel like my age becomes a barrier a lot of times to be able to do what I want to do. If I was older, this issue would not be there.”

Ageism is a Two-Way Street

The majority of news stories about ageism focus on bias against older people. But ageism isn’t a one-way street. Indeed, ageist traffic flows in both directions, toward older adults and younger adults, and it runs over lots of innocent people in the process.

Recent discussions of older-adult ageism often have attention-grabbing headlines, such as: “Workplace Ageism Still Flourishes in America,” “Why Ageism in the Workplace Still Seems to Be Okay,” “America’s workforce is graying, and ageism could cost the economy trillions of dollars,” “Ageism is a Global Challenge: UN.” That last article, published by the World Health Organization in March 2021, includes this summary: “Ageism leads to poorer health, social isolation, earlier deaths and cost economies billions: report calls for swift action to implement effective anti-ageism strategies.”

There’s no question about the pervasiveness of ageism directed toward older adults. But younger people are not immune from this scourge. A younger writer for Harvard Business Review asks, “Am I Old Enough to Be Taken Seriously?” Her experience in the workplace often deserved an emphatic “No.” She writes, “Young adults are more likely to report experiencing ageism at work than their middle-aged and older counterparts.” A recent article of the BBC bears this title, “The ‘acute’ ageism problem hurting young workers.” Reflecting on what’s happening in Britain, the writer comments, “We think of ageism as an issue affecting older workers. But experts say it’s hitting young workers harder than ever.” In summary, she concludes, “Reverse ageism is real – and worse than ever.”

Scholars and pundits sometimes claim that ageism is worse for whichever group they see suffering the most. But I’m not eager to enter that debate. I’m convinced that ageism is both prevalent and harmful no matter which direction it is flowing. Bias based on age is disrespectful to its victims, harmful to the economy, and detrimental to the common good.

Ageism also hurts the church. As part of the De Pree Center’s Third Third Initiative, we have spoken with church leaders throughout the country, asking for their observations and wisdom related to older adults in the church. One of the things we have heard repeatedly is that ageism toward older adults runs rampant in churches. Older adults with exceptional leadership abilities, for example, are sometimes dismissed from official church leadership groups and invited to fold bulletins for the Sunday worship service. Younger pastors often don’t turn to older adults for wisdom or collaboration, though they’re happy to receive their financial contributions. Now, we have also heard from the mature leaders with whom we’ve spoken that sometimes the older adults in power exercise their own version of ageism, holding back younger leaders with giftedness and potential. So, once again I say, ageism is a two-way street.

What can we do about this?

What Can We Do about Ageism?

When I began writing this article, I planned to call it “How Not to Get Run Over on the Two-Way Ageism Street.” That seemed like an appropriate and catchy title. But, as I thought more about it, I realized that I’m not interested only in helping folks avoid being crushed by ageist traffic. I’d much rather find ways to stop the traffic altogether. If people of all ages are going to flourish, if churches are going to thrive through the ministry of their members, if the common good is going to be enhanced, then we need to put an end to ageism, in addition to other prejudices that hamper individuals and impoverish both church and society.

Attacking ageism on a social and global level is both honorable and necessary. But I’m not qualified to lead such a widespread battle. I’d rather begin on a smaller scale, focusing on what you and I can do in our parts of the world, in our families, neighborhoods, businesses, and churches. I believe we can chip away at ageism, and not just the variety that affects us personally.

One way to do this is by developing relationships with people not of our own generation. For example, I am a Baby Boomer, having been born in 1957. That also makes me 64 going on 65. As you would expect, most of my closest relationships, apart from my children, are with my Boomer peers. But, because of my work at the De Pree Center, I am regularly interacting with younger people, especially folks from Gen-X (1965-1980) and Gen-Y (1981-1996). As we have worked together, sharing life in the process, we have grown in mutual respect and appreciation. I have discovered time and again how much I can gain from those who are younger than I am. And it seems like my younger colleagues have come to appreciate my contribution to their lives and work as well. 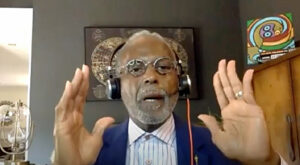 Raymond Jetson in our webinar

What I’m describing here isn’t found only at the De Pree Center, of course. Consider the case of Raymond Jetson, for example. (You may remember him from a webinar we did with him last year.) I’ll confess that Ray has become one of my “third third heroes.” He has an extraordinarily diverse background in public service and pastoral leadership. As a fellow in Harvard’s Advanced Leadership Initiative, Ray had a vision for the transformation of his community in Baton Rouge, Louisiana. He founded MetroMorphosis, a social impact organization that’s celebrating its tenth anniversary. One crucial piece of their work involves forging genuine collaboration between older adults and younger people.

Recently, one of my research partners, Ruth Bates-Hill, and I had a conversation with Ray. We were seeking his wisdom about various aspects of our Third Third Initiative. Ray brought up the importance of intergenerational relationships, noting that older adults have wisdom to impart to those who are younger as well as encouragement to give. “But,” Ray emphasized, “we have to create a framing of these relationships where they are reciprocal.” He explained that sometimes older mentors see themselves as the exclusive providers of wisdom, with the younger folk only as the receivers. “This sets up relationships that devalue other people unintentionally and run the risk of creating resentment,” Ray observed. It’s not helpful to insist that the younger folk are merely listeners and receivers. They have much to offer to their older partners. According to Ray, we need to create space for “reciprocal learning.” 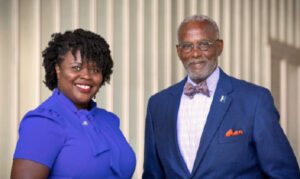 Ray practices what he preaches. If you visit the “The Team” page of the MetroMorphosis website, you’ll see a photo of Ray, who is the “Chief Executive Catalyst” of the organization. But he is not alone in his picture. Next to him is Sherreta Harrison, who is the “Sustainability Catalyst.” Their description says Ray and Sherreta “form the dynamic, intergenerational co-leadership team at  MetroMorphosis, a Baton Rouge-based social enterprise focused on transforming communities.” When I interviewed them in last spring’s webinar, it was obvious that their partnership is truly collaborative. Such an inspiration!

I want to imitate the example of Ray and Sherreta in my relationships with younger folk, with my colleagues at the De Pree Center, my fellow members at church, the folks I mentor, and, indeed, my adult children. I want to disrupt the ageism in my own life and relationships, replacing it with genuine mutuality and partnership. As Ray Jetson insists, intergenerational relationships have to be reciprocal.

Whether you and I are in positions of significant influence or not, we have the opportunity to begin to stop the traffic on the two-way ageism street. We who are older can respect those who are younger, rather than dismissing them with outworn and inaccurate stereotypes. We can discover how much we have to learn from them, and I’m not thinking only of digital savvy. Our anti-ageist initiative can, I believe, open up new possibilities as younger folk recognize that we who are older have much to offer them as well.

The Foundation for Intergenerational Respect and Reciprocity

I don’t mean to be pollyannaish here. I’m not suggesting that dismantling ageism, even on a personal level, will be easy. But I am suggesting that it’s worth doing and that we, in our relationships, can and should begin to do it. Yes, it’s about the benefits for organizations as well as our society as a whole. Yes, it’s about strengthening churches and their mission. But the fundamental rationale for fighting ageism comes from basic biblical truth. All human beings, for example, reflect God’s own image are therefore worthy of respect and honor. No room for ageism in God’s good creation. It sneaks in as a result of sin.

Moreover, when it comes to the new creation, we remember that the Holy Spirit was poured out “upon all flesh.” This meant that “your young men shall see visions and your old men shall dream dreams” (Acts 2:17). When we gather as the people of God, we are joined together in unified fellowship, unified mission, unified worship. As it says in Psalm 148, “Young men and women alike, old and young together! Let them praise the name of the LORD, for his name alone is exalted; his glory is above earth and heaven” (148:12-13).

Examine Your Life Carefully . . . by Stopping We also need to stop moving, to stop hurrying on to the next thing so…
Prayer and Purpose: The Two Go Together In recent devotions, we have seen how Jesus remained faithful to his purpose, even when…
A Tale of Two Healings: Part I One of the most fascinating aspects of this story within the story is that both…
A Tale of Two Healings: Part II - Life for Leaders I wonder what went through Jairus’ mind as he had to wait for the healing…