Surprised by Older Adults . . . at the Olympics

In the last few months I’ve been watching the media for interesting stories having to do with people getting older. Of course there continues to be a steady flow of negative pieces, usually featuring the word “tsunami” as in “silver tsunami” or “gray tsunami.” These stories about the destructive wave of older adults are not just limited to the U.S., by the way. A couple of months ago the Toronto Sun featured a story with this cheery headline, “The skyrocketing costs of Canada’s grey tsunami.” And just last week The Straits Times from Singapore hosted this article: “A ‘silver tsunami’ looms. What can Singapore do about it?” I was impressed by the fact that The Straits Times followed up a couple of days later with an opinion piece entitled, “Labels like ‘silver tsunami’ reinforce ageism.”

But I’m not writing this piece for our Third Third Journal to complain. Rather, I want to add another article in my growing “Surprised by Older Adults” series. So far, I’ve written two stories in this series. Both of them have noted how people considered to be “old” have surprised folks with their accomplishments. My first piece focused on reactions to Joe Biden, Tom Brady, Anthony Hopkins, and Phil Mickelson, all of whom are considered “old” for their line of work, and all of whom have recently achieved far beyond expectations. My second piece told the story of two older adults, Lillian Colón and Dick Van Dyke, who have both danced marvelously in movies at the ages of 66 and 91. 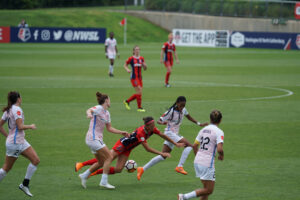 In the last week, I’ve seen two stories in the news with the theme: oldest athletes ever to go to the Olympics. The first of these articles bore this headline, “At 39, Carli Lloyd Will Be The Oldest U.S. Women’s Team Player To Go To The Olympics.” Lloyd, one of the finest soccer players in the world, will be going to her fourth Olympics. (If she retires from the soccer team at some point, she could join the NFL. Watch this short video of Lloyd easily kicking a 55-yard field goal.)

Bill Chappell, the writer of the story on Lloyd, mainly asked her questions having to do with soccer and the Olympics. But he did ask Lloyd if she might retire after the games. I liked her response:

I’m just enjoying the process right now, enjoying the moment, savoring it, cherishing it. You know, I’m always calculated with decisions that I’m going to have to make at some point. So, I’m not here to make any decision right now. I simply want to put all my focus on this Olympics, finish out my season with Gotham, the rest of the year with the national team and then just probably take some time to reflect and figure things out. . . .

But at some point, all good things come to an end. It’s not going to be a physical thing for me. It’s more so going to be a life decision, of wanting to start a family with my husband and spend time with my family and friends.

The second story I found was about a swimmer Siphiwe Baleka, who will be the oldest swimmer ever in the Olympics. He’ll be 50 when he swims in Tokyo. Baleka has dual citizenship with the U.S. and Guinea-Bissau in West Africa. He’ll be swimming for the Guinea-Bissau team as the first swimmer that country has ever sent to the Olympics.

Both of the Lloyd and the Baleka stories reported on the fact that the athletes are breaking Olympic records in terms of the age of participants. Neither article expressed shock or dismay. Nobody suggested, for example, that Lloyd should make room for younger players. Neither article celebrated the fact that people who are older, relative to their sport, are exceeding expectations.

But I am encouraged to see a growing awareness in the media of the fact that competence and even excellence are not reserved only for those who are young in their particular spheres of life. Stories like these will help to chip away at the cultural bias against older adults. They might also inspire some of us “third third” folk to venture beyond what is safe and comfortable in our lives, discovering just how much God is able to do in and through us.

Surprised by Older Adults A few days ago, golfer Phil Mickelson won the 2021 PGA Championship. This was quite…
Surprised by Older Adults . . . Dancing! A couple of weeks ago I wrote an article for the Third Third Journal called…
How the Christmas Story Encourages Older Adults I’m writing during the final days of Christmastide 2021-2022. In this season of the year,…
Third Third in the News - November 2022 - The Changing… Transcript: Future of Work: Rethinking Age & Work Washington Post, October 26, 2022 https://www.washingtonpost.com/washington-post-live/2022/10/26/transcript-future-work-rethinking-age-work/ This…