A couple of weeks ago I wrote an article for the Third Third Journal called “Surprised by Older Adults.” I talked about how pundits continue to express surprise when older adults do things that show their exceptional abilities, even as they age. I mentioned as examples Phil Mickelson, Joe Biden, Tom Brady, and Anthony Hopkins. I predicted that a new narrative might be emerging, one that will highlight the surprising ability of folks who had been written off because of their age.

Well, I just spotted a new example today. Newsbreak featured a post with the following headline: “Meet the 66-Year-Old Dancer in ‘In the Heights.’” Now that got my attention! I’ll even confess to being surprised. I saw In the Heights recently and the dancing is phenomenal, both highly artistic and highly athletic. I’m impressed that anyone at 66 years of age could do that. I couldn’t at 26.

Newsbreak pointed to a longer story at nextavenue.org, a website that focuses on issues of relevance to folks in the third third of life. Next Avenue told the story of Lillian Colón, who auditioned for and made it into In the Heights. It turns out that this wasn’t the first time Colón broke through a barrier. Many years ago, she was the first Latina member of the famed New York City Rockettes. Not surprisingly, Colón at first experienced some ageism from the other dancers in In the Heights. But, in time, she won them over.

Lillian Colón’s accomplishment is impressive, to say the least. I’m eager to see In the Heights again, not only because the music and choreography were amazing, but also to see if I can spot Colón.

Her accomplishment reminds me of another story I read a couple of years ago. This one was about Dick Van Dyke in Mary Poppins Returns. Van Dyke, who was one of the dancing stars in the original Mary Poppins movie had a small but crucial part in Returns. In this part, he seemed to climb up on a desk and do some impressive dance moves for the song “Trip a Little Light Fantastic.”

Now, I must confess that when I first saw Mary Poppins Returns, I assumed that Van Dyke’s dancing performance involved some sort of movie magic, CGI or something like that. Perhaps they had superimposed his face on a much younger dancer. But, later, I discovered that Van Dyke did his dance unaided by tricks or helpers . . . at 91 years old! I also discovered a bit of my own ageism in my assumption that there was no way someone as old a Van Dyke could have danced as he did.

By the way, Walt Disney Studios put up on YouTube a short clip of Van Dyke dancing. You’ll notice that he didn’t jump up onto the desk. But still . . . . 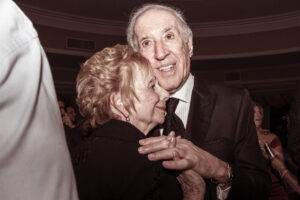 John Medina, in his fascinating book, Brain Rules for Aging Well, summarizes scientific research that shows that one of the best things you can do as you age is to dance. It keeps you fit physically and mentally. Now, Medina isn’t talking about the kind of dancing that happens in movies. Rather, he’s referring to dancing that involves partners and socializing, the sort of dancing you do at a wedding, for example.

One of the main reasons dancing is so good for us is that it requires lots of engagement with other people, not to mention physical and mental exercise. Medina writes, “You can cover the dance floor with peer-reviewed papers showing the benefits of this regular, ritualized movement that forces social interaction. The scientific benefits are almost too good to be true” (p. 33). Medina summarizes his advice for third thirders in this way: “Dance. Dance. Dance. Benefits include exercise, social interactivity, and an increase in cognitive abilities” (p. 37). And, if you’re really, really good, you just might make it into a hit movie! But even if you don’t, you’re still doing really, really good things for your brain and body.

Surprised by Older Adults A few days ago, golfer Phil Mickelson won the 2021 PGA Championship. This was quite…
Surprised by Older Adults . . . at the Olympics In the last few months I’ve been watching the media for interesting stories having to…
How the Christmas Story Encourages Older Adults I’m writing during the final days of Christmastide 2021-2022. In this season of the year,…
Third Third in the News - November 2022 - The Changing… Transcript: Future of Work: Rethinking Age & Work Washington Post, October 26, 2022 https://www.washingtonpost.com/washington-post-live/2022/10/26/transcript-future-work-rethinking-age-work/ This…

One thought on “Surprised by Older Adults . . . Dancing!”