The Sixth Word:
It is Finished

When Jesus had received the wine, he said, “It is finished.” Then he bowed his head and gave up his spirit.

Today’s devotion is the sixth in a Life for Leaders series focusing on the seven last words of Christ from the cross. If you missed the previous entries in this series, you can find them at our Life for Leaders page on our website.

I can remember vividly the first time I watched The Passion of the Christ. I saw an advanced screening for pastors in Mel Gibson’s conference room. Given my historical studies of crucifixion, I had a sense of how hard it would be to watch. But I had no idea just how difficult it would be to actually view that film. For much of it I wanted to avert my eyes. It was horrible to watch even a cinematic version of a crucifixion, especially one that was fairly accurate in its portrayal of that ancient Roman form of torture and execution. It was beyond comprehension to think that this actually happened to any human being, and not just anyone, but to the Lord and Savior whom I loved. Seeing a visual presentation of his suffering was almost more than I could bear. When The Passion of the Christ was over, I felt palpable relief. Thank goodness it was finished.

When Jesus said “It is finished,” I imagine he was expressing relief that his suffering was finally over. “It is finished” meant, in part, “This is finally done!” But the Greek verb translated as “It is finished” (teleo) means more than this. Eugene Peterson captures the full sense of the verb in The Message: “It’s done . . . complete.” Jesus had accomplished his mission. He had announced and inaugurated the kingdom of God. He had revealed the love and grace of God. He had embodied that love and grace by dying for the sin of the world, thus opening up the way for all to live under the reign of God. In the words of 2 Corinthians 5:21, the one who “knew no sin” was made “to be sin . . . so that in him we might become the righteousness of God.”

Because Jesus finished his work of salvation, you and I don’t need to add to it. In fact, we can’t. He accomplished what we never could, taking our sin upon himself and giving us his life in return. Jesus finished that for which he had been sent. We are the beneficiaries of his unique effort. Because of what he finished, you and I are never “finished,” to use this word in a different sense. We have hope for this life and for the next. We know that nothing can separate us from God’s love.

In God’s time, what God has begun in us will also be finished, by his grace. As Paul once wrote to the Philippians, “I am confident of this, that the one who began a good work among you will bring it to completion by the day of Jesus Christ” (Philippians 1:6). The Greek verb translated here as “bring to completion” is epiteleo, which is based on the verb Jesus used in “It is finished” (teleo). So, here is very good news. Because Jesus finished his saving work on the cross, you can have confidence that one day God will finish his saving, renewing work in you. You will be fully forgiven, healed, and restored. You will be everything that God envisions you to be. You will be, in a word, finished. You will be complete and whole. 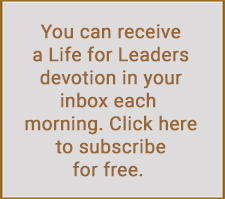 Do you live as if Jesus finished the work of salvation? If so, why? If not, why not?

Do you have confidence that God will finish that which he has begun in you? If so, does this confidence make a difference in how you live today?

Read (at least) John 19:28-30. You may choose to read the whole chapter. Take time to reflect on Jesus’s statement, “It is finished.” What does this statement mean to you? Then, ponder the following: After God finishes his good work in you, what will you be like?

Lord, Jesus, how can I ever find words to express my gratitude to you? You did it. You finished that for which you had been sent, faithful in life, faithful in death. You accomplished that which no other person could do, taking the sin of the world upon your sinless shoulders . . . taking my sin so that I might receive your forgiveness and new life.

Thank you for continuing your good work in me. I look forward to the day when I too will be finished. In the meanwhile, I invite you to be at work in me, for your purposes and glory.

You can access all of our Life for Leaders devotions HERE. You can also learn more about the De Pree Center and its resources HERE.

Prayers for Workers: Keeping Your Word Even When It Hurts God is honored when you keep faith in your work, even when it hurts.
Take the Sword of the Spirit, the Word of God The final piece of the divine armor in Ephesians 6 helps us see how we…
The Fourth Word: My God, Why Have You Forsaken Me? Yet, no matter how many brilliant theologians we read and how much we meditate upon…
The Fifth Word: I am Thirsty In the account of the crucifixion in the Gospel of John, Jesus said “I am…