The Third Third Language Challenge: Are You Old? Or a Perennial?

On the term “perennials,” Barbara Cartensen says, “The symbolism it connotes is perfect. For one, ‘perennials’ makes clear that we’re still here, blossoming again and again. It also suggests a new model of life in which people engage and take breaks, making new starts repeatedly. Perennials aren’t guaranteed to blossom year after year, but given proper conditions, good soil and nutrients, they can go on for decades.”

The Third Third Language Challenge: Are You Old? Or a Perennial?

I’m seeing the word “old” a lot these days in the media. For example, an AP News story has this headline: “‘Just too darn old:’ Sanders, Biden confront age concerns.” And, not to be overly partisan, there’s the MarketWatch article: “Sanders, Biden and Trump are too old to be president.”

According to my informal research, every time someone writes or talks about a candidate as being old, the word is used negatively. “Old” implies “too old.” I haven’t yet seen anyone suggest that “old” might be a good thing, something associated with wisdom and experience. In our culture, “old” is not anything to be admired or valued.

As it turns out, both Joe Biden and Bernie Sanders have actually admitted to being “old.” Biden says he is old “chronologically,” implying that he is not old in ways that matter for a president. Sanders points to his age as proof that his ideas are “in my guts, they’re in my heart.” But, for the most part, all the presidential candidates over 70 avoid the “old” label.

This same could be said for almost anyone in that age bracket. Laura Cartensen, professor of psychology and director of the Stanford Center on Longevity, in an opinion piece for the Washington Post, “In search of a word that won’t offend ‘old’ people,” observes that “most people in their 60s, 70s and older still don’t think of themselves as ‘old.’” For them, “the story about old people remains a dreary one about loss and decline.”

For a while, Cartensen tried to advocate for a more positive and robust use of the word “old.” But her effort failed. Still, she has not been overly impressed by various substitutes for “old.” She says, “The most widely used are ‘senior citizens,’ ‘retirees,’ ‘the elderly and ‘elders.’” But those who might adopt these terms for themselves avoid them. 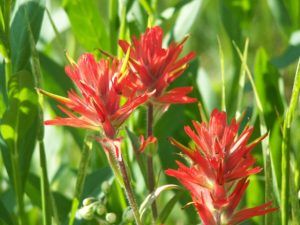 Many varieties of the wildflower Indian Paintbrush, pictured above, are perennials that bloom for many years.

In her article, Cartensen expresses enthusiasm for another word to describe folks over 60: “perennials.” She attributes the use of this word to “Maureen Conners, a fascinating woman who works in fashion technology.” (Gina Pell of The What actually claims to have coined the term.) Cartensen approves of “perennials.” She writes, “Upon first hearing this term, I was startled. The symbolism it connotes is perfect. For one, ‘perennials’ makes clear that we’re still here, blossoming again and again. It also suggests a new model of life in which people engage and take breaks, making new starts repeatedly. Perennials aren’t guaranteed to blossom year after year, but given proper conditions, good soil and nutrients, they can go on for decades. It’s aspirational.”

Not everyone approves of “perennial,” however. The Wall St. Journal reports that Pam O’Brien, a 69-year-old professor at the University of Pittsburgh, described the term as “contrived.” Dan Reingold, CEO of RiverSpring Health, said “It sounds like a plant.” Reingold is certainly right in a sense. A “perennial” is a particular kind of plant. “Annuals” bloom for a year and then die out. “Perennials” keep on blooming for many years to come.

There are several things I like about the word “perennial” to describe someone 60 or older (someone like me):

I’m not yet ready to adopt “Perennial” however. It does feel a bit contrived to me. But that may be because it’s relatively unfamiliar. It will be interesting to see if it catches on.

I’m not sure that calling our current presidential candidates perennials would satisfy the concerns of those who think they’re simply too old, however. The question of whether or not a person older than 70 is fit to be president is not a matter of language, but of medical and social science. Perhaps I’ll take this on in another blog post.