Truth and Institutional Evil – Part I

Then God said, “Let us make humankind in our image.”

One of the foundational assertions of Scripture is that all human beings are created in God’s image. There are no privileged races or individuals in God’s eyes. That declaration was a radical challenge to the power of Pharaoh in Egypt during Israel’s enslavement, as it was to the Nazi regime in my parents’ day, and as it is to the power of structural racism in our generation. What will we do with that truth now? 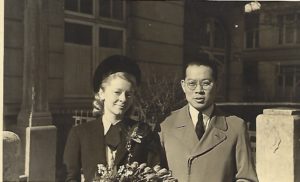 My Parents at their Wedding in 1941 © The Chi Family

My parents met in the late 1930’s in Nazi Germany. She was an intelligent and beautiful young German in her early 20’s. He was a charming Chinese engineer in his early 30’s finishing his doctoral work. The met, fell in love, and were married in 1941 in Hamburg, Germany. Their interracial love story would be unremarkable in our day. In their day, it was inconceivable. More importantly, it was verboten, forbidden.

For you see, in Nazi Germany, racism was not just socially tolerated, it was legally enforced. White supremacy was not an individual conviction, it was the law of the land.

One of the foundational assertions of Scripture is that all human beings are created in God’s image. There are no privileged races or individuals in God’s eyes. That declaration, embodied in our text for today, was a radical challenge to the power of Pharaoh in Egypt during Israel’s enslavement, as it was to the Nazi regime in my parents’ day, and as it is to the power of structural racism in our generation.

In contrast to my parents, whose very lives were at grave risk, my personal experience of racism has been modest. Like many others, I’ve lived most of my life with the illusion that racial bigotry isn’t a significant problem, at least not for me and for my community. But then – as has happened so many times before – came the deaths of Ahmaud Arbery, Breonna Taylor, and George Floyd.

As The Lord of the Rings reminds us, “Some things that have been forgotten were lost.” But what once was lost has been found again. Found again is the memory that I live in a house that I once would have been forbidden to own because of my racial heritage. Found again is the realization that, in the year my wife and I were born, in many states, my parents’ marriage would have been illegal, and my wife and I could not have married. And in 2020, found again is the continuing reality of structural racism – racism that isn’t just an individual problem but an institutional evil.

What will we do with the truth that we’ve found again? For those of us who claim to follow Jesus and who rightly sing “Amazing Grace,” will we follow the example of its author, John Newton? Newton was a slave trader who repented of his sins, including that of benefitting from the economics of structural racism, and was instrumental in the abolition of slavery in Great Britain in 1807. Will we be as courageous to risk our reputation and our livelihood, as Newton did, in stating publicly that “I am bound, in conscience, to take shame to myself by a public confession, which, however sincere, comes too late to prevent, or repair, the misery and mischief to which I have, formerly, been accessary. I hope it will always be a subject of humiliating reflection to me, that I was, once, an active instrument, in a business at which my heart now shudders” (Thoughts Upon the African Slave Trade by John Newton). And what would following Newton’s example look like today?

These are difficult questions for me to answer. I admit that I neither know the personal suffering of structural racism that my parents did, nor that so many of our Black and brown brothers and sisters do today. I must confess that I have been all too attached to the privileges of “fitting in” to existing power structures that historically privilege white males. But I also confess, perhaps like many of you readers, that recent events have reawakened a long overdue revulsion at the injustice and, dare I say, blasphemy of the powers of darkness who come dressed as “an angel of light” (2 Corinthians 11:14b, NIV). Like many other Christians, I have been willing to follow, benefit from, and even defend such darkness. I’m afraid that what the Apostle Paul said in his day about Jews committed to the Law, could be said of me as an evangelical today: “God’s name is blasphemed … because of you” (Romans 2:24, NIV).

How have recent events affected the way you look at racism today?

Take time to read the linked article in the last paragraph of the above devotional. Find someone, preferably someone who is black, with whom to discuss the article and learn from their experience of institutional racism.

We mourn in our day at the told and the untold stories of suffering and evil perpetrated against those who are your brothers and sisters. We grieve and repent of our past blindness and indifference.

We pray with you and commit to work with your Spirit for justice for all those who have been oppressed and for their flourishing in our communities. By your Spirit, empower us to make structural changes to the institutions of our culture that favor the powerful over the weak, and that give preference to one race over another. Give us insight and virtue to work out the complex ways in which such changes need to be made.

Grant us mercy and peace as we seek to do justly, to love mercy and to walk humbly with you.

Find all Life for Leaders devotions here. Explore what the Bible has to say about work at the unique website of our partners, the Theology of Work Project. Commentary on today’s Life for Leaders theme can be found here: God Works Relationally (Genesis 1:26a)

Truth and Institutional Evil – Part II Large-scale calamities – some natural and some caused by human evil – recur in human…
The Root of All Evil We may find ourselves loving money because money buys security. And security may make us…
Put on the Belt of Truth In Ephesians, truth is specifically connected to Jesus Christ. It is, at its core, the…
Speaking the Truth Can Actually Be Quite Wonderful Sometimes we are able to help our brothers and sisters hear in a new way…

11 thoughts on “Truth and Institutional Evil – Part I”