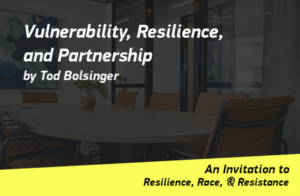 As soon as I hit the “send” key, I felt nervousness set in. I worried that my request would reveal such a glaring weakness that it would make others doubt my capacity to lead. I had just written to an old mentor, Steve Yamaguchi, to ask him to take a role in my life that was different for both of us. While I have long been committed to being in some kind of coaching, spiritual direction, or psychological therapy to continue my growth as a leader, some recent leadership challenges led me to feel that I could use some help in a very particular area of his expertise.

Through emails and personal conversations, I explained to Steve both my circumstances and my request:

As you know, I’m a 50-something white guy with three academic degrees who was given leadership responsibility at an early age. I became a senior pastor at 33. Most of my work the past two decades has been in pretty culturally-white contexts, and now I find myself back in Los Angeles in a much more diverse setting with many voices challenging the white normativity that I have to admit that I can’t always see and unconsciously assume. I’m wondering if you could become my coach for developing my “cultural competency” (a term that I have heard some of my colleagues use).

This was a sensitive subject for me. I don’t like feeling incompetent. It feels embarrassing, even with someone that I have known for years. I felt exposed. Back when I was a younger leader, I had learned the art of how to “fake it ’til you make it,” and now I was admitting to someone that I deeply admire that I couldn’t fake this one. My colleagues—even my students—had begun to reveal to me how the implicit biases shaped by my lack of awareness about my cultural identity was affecting my capacity to lead well in more diverse arenas. The leadership book that I had written in 2014 had now taken me into settings where many of my assumptions about leaders and leadership were being challenged as normative for the white majority culture but inadequate for leaders of color, for women, and for settings that were questioning the assumptions of power and privilege. I had faced the fact that I needed help, but admitting it to anyone else—even a trusted mentor—was difficult. I was relieved when within hours, I received from Steve a kind reply.

“That sounds very interesting,” he wrote, “let’s talk about how I can be of help.” He then went on to suggest one change. “Yes,” he said, “you are a 50-something white guy with academic degrees and all the rest. So, let’s not assume that I can coach you into cultural competence. Frankly, I don’t believe you will ever be culturally competent, but we can talk about developing cultural humility.”

He explained, “Competence assumes the acquisition of skill and knowledge that will leave one armed with tools to succeed in multiple and diverse settings. The problem is that the world is far too complex to be mastered like this. Cultural humility does not seek mastery of all things cultural, but seeks to develop a posture of life-long learning rooted in self-awareness, attentiveness, and increased capacity for discerning differences as well as similarities.”

Ah. Not competence, but humility. In his gracious response, Steve was already beginning to coach me. Acknowledging that the strategies that had once worked in a more culturally-homogeneous context were failing in a new context caused me to reach out for help, and a few months later Steve’s coaching would be even more crucial for me.

I had traveled to upstate New York to speak to a group of clergy on the topic of leading in a rapidly-changing world, but I knew something was wrong when the bishop’s assistant approached me right before I was to step up to the microphone. “We will be delayed a few minutes,” he said. “Some of our pastors are meeting with the bishop. You should know that they are uncomfortable with your use of two slaveholders, Meriwether Lewis and William Clark, as examples of leadership.”

I nodded and swallowed hard.

A number of the regional leaders had read my book Canoeing the Mountains, and they had asked me to be the keynote speaker for their Annual Conference Clergy Meeting. In the previous four years I had traveled to speak to the most diverse groups of Christian leaders imaginable on the story of how Lewis and Clark had to lead their Corps of Discovery into the uncharted territory of the west. For some it was just a historical metaphor for discussing how to lead adaptive change. For many others, however, the very topic was a painful reminder of the racism that makes up what Jim Wallis has called “America’s original sin.” And even though the hero of the story is the Shoshone nursing mother Sacagawea, the very fact that Lewis and Clark were slave masters and that their expedition paved the way for others that led to the eventual destruction of the way of life and relocation of the indigenous peoples of the American west is deeply troubling.

Preparing to step in front of the lectern, I mentally rearranged my outline so that we talked about the sensitive subject right up front. I wanted them to know I was using the historical figures not as models but as mirrors. I held them up because they were a lot like us, with our deep contradictions, and like us their intentions for leading were distorted and led to unanticipated consequences that they couldn’t control.

And sure enough, as soon as I started in on the narrative of the travels of the Corps of Discovery, a pastor in the back of the room stood up to gain attention. When I asked her to please speak, she passionately shared the deep concern and even hurt of the group of African American clergy in the room. The ensuing conversation not only disrupted my presentation but the whole conference. The tension in the room was palpable, with one group after another threatening to leave. Some because they found the topic offensive, others because they found the protest indefensible. And there I stood in the room, the focus of a heated discussion that was directed at me but fueled by the clergy in the room who had long felt that their concerns as people of color had been ignored or minimized within their own organizational context.

Through a long, emotional and turbulent morning that spilled over into the afternoon, I was in the middle of a painful discussion on one of the most fraught and difficult topics. Tempers were high, accusations were flying, my work was being discredited, my very character was being questioned. I was aware of every word I was saying and even trying to monitor the tone of my voice. I remember telling myself to exhale, to relax my tense back muscles, to try to carefully listen to the pain that was filling the room. As I listened deeply to the people who were so understandably angry, I focused on keeping my defensiveness at bay, remembering that most of the anger wasn’t directed at me personally but at the larger issues that were not only important but worthy of angry responses.

At the break I called Steve.

Even talking to him helped me to relax, to stay attuned to both the voices of those who were protesting my presentation and those who wanted me to ignore them and continue. Steve asked me questions and reminded me of what it takes to create a “holding environment” that creates both safety and the ability to allow the heat of the moment to bring transformation.

The Need for a Different Kind of Formation

Looking back at that moment now two years later and in the wake of even more social unrest unleashed through the deaths of George Floyd, Breonna Taylor, Sandra Bland, Ahmaud Arbery (and many, many more), I am profoundly aware that naming and navigating the legacy of America’s fraught—and at times horrific—history of race relations could be the single greatest challenge for the church. From Dr. Martin Luther King, Jr’s letter to the Birmingham clergy written from a jail cell in 1963 to the litany of centuries of complicity outlined in Jemar Tisby’s The Color of Compromise, to the very actions (and often stunning silence) of the church in the wake of the Black Lives Matter movement, the church in the West—at least the dominant, mainline and evangelical church in the West—is very often on the wrong foot in the long march for justice, reconciliation, and peace that is held up as God’s ultimate and beautiful redemptive purpose in passages such as Isaiah 40, Luke 4, Revelation 5, and Revelation 21.

Years ago, Steve had passed along to me a saying of one of his mentors: “At the moment of crisis, you do not rise to the occasion; you default to your training.” Very often as I consider the kind of wise courage, creative perseverance—or tempered resilience as I have described it in a more recent book—I have realized that for those of us called to leadership in this moment of deep racial discord, we are going to need re-training and even more deeply a different kind of formation. Especially when our efforts to speak against injustice are met by resistance from our own congregations, we need a kind of formation that is found only in the very crucible of leadership.

In Tempered Resilience, I use a blacksmithing analogy to communicate the kind of dramatic and oftentimes painful process of formation needed to develop the leadership strength, wisdom, and flexibility for entering into this most challenging of leadership moments. What I found in my own life was that there were no shortcuts to the formation that is necessary to lead change when the resistance of our own people (as is often to the case in predominantly-white churches) is highest.

Tempered resilience comes through a formational process that is vulnerable, relational, and often feels very costly for the leader. It happens in real time, in the heat of conflict where mistakes and missteps are magnified. Leading a congregation or organization to face their implicit biases and long-cultivated blind spots, to dismantle systemic processes of injustice, and to live into the justice of the gospel will require leaders who are able to be continually shaped through vulnerable self-reflection, collaborative learning, and intentional spiritual practices for cultivating qualities that have often been overlooked and neglected. What I experienced in my coaching relationship with Steve was that this formation IS possible. Slowly, painfully, often through failures and missteps.

But I absolutely could not learn this kind of leadership alone.

Tod Bolsinger is the Executive Director for the DePree Center Church Leadership Institute, and the author of Canoeing the Mountains: Christian Leadership in Uncharted Territory, and the newly released, Tempered Resilience: How Leaders are Formed in the Crucible of Change. Click here to view Tod’s profile.

Conversing Podcast: Tod Bolsinger on Leadership Formation We have an honest conversation about what it's like to struggle with mental health at…
Confronting Our Fears What keeps you back from serving God fully and freely? In many cases, the answer…
Confronting Your Inner Pinocchio Truthfulness begins with our being honest with ourselves.
Confronting an Epidemic of Loneliness There is an epidemic of loneliness in the United States. Older adults are lonely. Millennials…

Resources for church leaders who want to lead faithful change in a rapidly changing and disruptive world.