Walking in the Parade of Christ

On the day in which Pasadena, California hosts the Rose Parade, we are inspired by a passage in the Bible that draws upon parade imagery. We are honored to walk in the parade of Christ, celebrating his victory over sin and death. Moreover, we are the “aroma” of Christ, representing his love and grace in the world through what we do and say.

Today is January 2, 2023. It’s also the day for the Rose Parade in Pasadena, California, where I live. Though the Rose Parade usually occurs on January 1st, when the 1st is a Sunday, the parade almost always happens on the following Monday. This has been true for well over a century. The “Not on Sunday” tradition began and has continued out of respect for the churches along Colorado Blvd, the main street on which the parade happens. 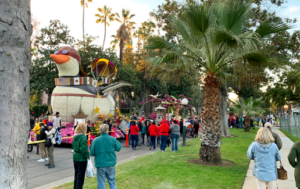 Photo by Mark Roberts of the Rose Parade

Speaking of tradition, for many years now my family has had a tradition of getting up very early on the day of the Rose Parade and taking the Metro Gold Line to a spot near where the parade floats are lining up. Then we walk along that lineup, viewing the floats from just a few feet away. We finish shortly before the parade begins, heading for home where we, of course, watch the parade on TV. We love seeing the floats up close. Sometimes we can even smell the flowers on the floats.

In one of the Apostle Paul’s letters to the Corinthians, he speaks about a parade and the smells it generates. In 2 Corinthians 2:14-15 he writes, “But thanks be to God, who in Christ always leads us in triumphal procession, and through us spreads in every place the fragrance that comes from knowing him. For we are the aroma of Christ to God among those who are being saved and among those who are perishing.” I figured this would be a good day to reflect with you on this passage, especially since I live in a place with a parade featuring sweet-smelling flowers.

Of course, Paul was not envisioning the Rose Parade when he wrote 2 Corinthians. Rather, he was picturing one of Rome’s triumphal parades that followed a Roman military victory. After winning a war, Rome would put on what was for them a triumphal procession. They would parade their prisoners of war in front of the vanquished people as a way of boasting in their power and humiliating their victims.

Paul uses this imagery, though with striking irony. Yes, Christ has triumphed over us in a way. But his triumph came through the humiliation of the cross. Moreover, those of us who have been captured by Christ are not humiliated but glorified along with Christ. We celebrate the victory of Christ over sin and death, that which leads to eternal life for us.

Roman triumphal processions also included the burning of incense, another symbol of celebration. Paul riffs on this practice as well, once again in an ironic way. We are “the aroma of Christ” (2 Corinthians 2:15). We are those through whom the salvation of Christ is spread throughout the world.

The parade imagery in 2 Corinthians reminds us of two vital truths. First, we who belong to Christ live under his sovereignty. He is our Lord. Our lives belong to him. But his victory doesn’t lead to bondage for us; rather it leads to freedom and empowerment. Thus we rejoice to be part of Christ’s victory parade.

Second, as the “aroma of Christ,” we have the privilege and responsibility of spreading the good news of Christ throughout the world. We do this by speaking and living in such a way that people sense the love and grace of Christ in us. We testify to Christ in word and deed, helping those who do not know him to be drawn to him and his salvation.

Our passage from 2 Corinthians causes me to ask myself: Am I living as the aroma of Christ? Does my presence in this world reflect well on him? Does it draw people to Christ . . . or chase them away? Do my words and deeds genuinely reflect the love and grace of God in Christ?

Are you living as the aroma of Christ?

Does your presence in the world reflect well on him?

Does your aroma draw people to Christ? Or does it chase them away?

Do your words and deeds genuinely reflect the love and grace of God in Christ?

Take time to consider whether or not you are living as the “aroma” of Christ.

Lord Jesus Christ, I praise you today as the victor over sin and death. I praise you because I am one of your “captives.” I’m captive to your grace and love. I’m set free because of what you have done on the cross. Following you is not a matter of humiliation, but glorification. I’m delighted to be in your parade.

Help me, I pray, to live and speak with your “aroma.” May my presence in the world reflect well on way. May it draw people to you rather than chase them away. Amen.

Find all Life for Leaders devotions here. Explore what the Bible has to say about work at the unique website of our partners, the Theology of Work Project’s online commentary. Reflection on today’s Life for Leaders theme can be found here: The Priority of Relationships (2 Corinthians 2:12–16).