We Are the Lord’s

Also those who eat, eat in honor of the Lord, since they give thanks to God; while those who abstain, abstain in honor of the Lord and give thanks to God. We do not live to ourselves, and we do not die to ourselves. If we live, we live to the Lord, and if we die, we die to the Lord; so then, whether we live or whether we die, we are the Lord’s. For to this end Christ died and lived again, so that he might be Lord of both the dead and the living.

No matter what happens, you belong to Jesus Christ. And Jesus Christ is not just any old powerless idol. He is the God who suffered for us.

As we noted when I last wrote on Romans, in the latter part of this letter Paul is interested in the “So what” of Christian faith. If God has transformed the world, if everything is cosmically different because of what Christ has done, if old divisions are healed and nothing can separate us from the love of Christ—what does that mean in our daily life? 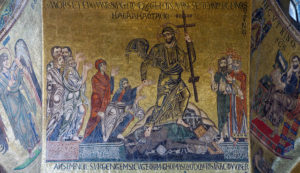 The Harrowing of Hell as depicted in St. Mark’s Church in Venice

It’s out of that context that today’s wonderful affirmation of our ultimate hope in Christ arises. And it arises, not in the context of a lofty doctrinal discussion, but in what we might call a matter of church order. What should we eat?

This isn’t simply a request for people to bring different things to the potluck. Eating in the first-century Roman Empire was a tricky business for Christians, because meat that was offered for sale in the market had usually first been sacrificed to the Roman gods as part of pagan worship. It was simply how meat got to the market. What was a Christian who believed the Roman gods were idols to do?

Paul goes on at more length about this in 1 Corinthians 8, but in both places, his argument is the same: if you want to eat the meat, eat it, because “no idol in the world really exists” (I Corinthians 8:4). But if it bothers your conscience, don’t. And those with stronger consciences should defer to the weak in this case.

But, he adds in this passage, all such distinctions ultimately fall away before the face of Christ. Don’t waste your time fighting over meat, or the observance of certain days (Romans 14:5); remember there is a bigger mission you’ve signed on for. Whether you eat or abstain—in fact, whether you live to a contented old age or whether you die a martyr for the faith—you belong to Jesus Christ. And Jesus Christ is not just any old powerless Roman god. He is the God who suffered for us: “For to this end Christ died and lived again” (Romans 14:9).

Here’s where we can begin to deal with the heavy issue that yesterday’s devotion laid on our heart. As we try to find our way in these confusing times—as we discern what our culture, our workplaces, and even our churches have made idols out of—we need to continually remember that Christ walks besides us everywhere. The early church laid heavy stress on the fact that during the time between his crucifixion and his resurrection, Christ actually descended to the abode of the dead to rescue all those who had died longing for his coming.

I like to think that some of the Egyptians were there too.

Where have you seen Christ walk beside you in your suffering?

Where do you need to walk beside others who are suffering and show God’s love to them?

Ponder this image of what the early church called the Harrowing of Hell, showing Christ taking the hand of Adam and Eve to redeem them. Let the image speak to you about Christ’s power over sin and death today.

Lord Jesus, whether we live or die we belong to you. Help us affirm that truth and help us live it out in our daily lives, friendships, churches and workplaces. Amen.

Find Out What Pleases the Lord! These days there is a sad shortage of thoughtful finding out. News media get attention…
You Can Please the Lord! A more complete motivation for right living takes seriously the implied good news of Ephesians…
One Way to Discover What Pleases the Lord Many times in life, we’re just not sure what might please the Lord. We wrestle…
Prepare the Way for the Lord The Gospel of Mark begins with a voice crying out, “Prepare the way for the…