The Bible underscores in multiple ways the potential of older adults to contribute to God’s work in both creative and redemptive ways. Though God can certainly call younger people into his service (for example, Samuel in 1 Sam 2 or David in 1 Sam 16), God often chooses older people for key roles in his kingdom work.. 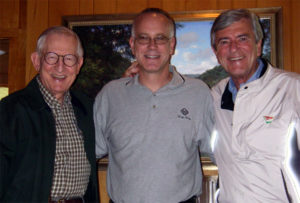 A photo from 2007 at Laity Lodge. I’m standing between two men who flourished well into the third third of life. I learned so much from my mentors, Lloyd Ogilvie (right) and Howard E. Butt, Jr. (left).

God created human beings in God’s own image, instructing the first humans to share in his work of making the world all that God intended it to be. The original command given to human beings makes this assignment clear: “Be fruitful and increase in number; fill the earth and subdue it” (Gen 1:28, NIV). Fruitfulness, which includes but is not limited to bearing and raising children, is central to the biblical vision of human life. Through working in varied ways, whether for pay or not, whether in businesses, homes, warehouses, studios, shops, schools, fields, hospitals, or governments, we contribute to the fruitfulness and fullness of the world, in obedience to God’s commandment. We steward the gifts, opportunities, and responsibilities God has give to us as human beings.

When we do this, we flourish. Flourishing as a primary goal of human life is promoted in contemporary philosophical, psychological, theological, medical, and pragmatic discussions of what is called “human flourishing.” Following Aristotle and his analysis of eudaimonia, scholars suggest that flourishing is essential to a life of fulfillment and happiness.[1] What is flourishing? According to one study, “A person can be said to be flourishing if they perceive that their life is going well. Flourishing is a combination of feeling good and functioning effectively.”[2] Tyler J. VanderWeele, the Director of the Human Flourishing program at Harvard University, suggests that, “Flourishing itself might be understood as a state in which all aspects of a person’s life are good.” He adds that it is related to five domains of life: “(i) happiness and life satisfaction; (ii) health, both mental and physical; (iii) meaning and purpose; (iv) character and virtue; and (v) close social relationships.”[3]

The biblical witness affirms the desirability of human flourishing as described by VanderWeele, though adding two significant nuances. First, Scripture is clear that flourishing is possible for all people, including specifically those in the later years of life. Psalm 92:12-14 proclaims, “The righteous will flourish like a palm tree, they will grow like a cedar of Lebanon; planted in the house of the LORD, they will flourish in the courts of our God. They will still bear fruit in old age, they will stay fresh and green.” Those who live in right relationship with God, people, and the world will flourish even when they have “gray hair” (the literal meaning of the Hebrew word translated in Ps 92:14 as “old age”).

Second, the biblical vision of flourishing emphasizes, not so much subjective experience of wellbeing as objective fruitfulness in the world. The Hebrew verb translated as “flourish” in Psalm 92:12-13 (parach) has a literal meaning of “bud, sprout, or flower” (see for example Gen 40:10, Isa 35:1-2). Psalm 92 underscores this meaning in verse 14. Those who flourish in the courts of our God “will still bear fruit in old age” (Ps 92:14, italics added). God’s initial command to human beings, to be fruitful, applies to those in the third third of life just as much as it does to younger people.[4]

The Bible underscores in multiple ways the potential of older adults to contribute to God’s work in both creative and redemptive ways. Though God can certainly call younger people into his service (for example, Samuel in 1 Sam 2 or David in 1 Sam 16), God often chooses older people for key roles in his kingdom work. Abraham, for example, was 75 years old when he followed God’s call to leave Haran (Gen 12:4). Sarah was in her 90s when she gave birth to Isaac (Gen 17:17). Moses was 80 years old when he advocated for Israel in front of Pharaoh.[5] The Jewish law instructs people to “stand up in the presence of the aged, show respect for the elderly” as an expression of their fear of the Lord (Lev 19:32). Proverbs celebrates the “splendor” of old age (Prov 20:29), proclaiming that, “Gray hair is a crown of splendor” (Prov 16:31). Through the prophet Joel, God promises to pour out the Spirit on old and young alike (Joel 2:28), empowering all people for the work of God’s kingdom.

In biblical perspective, therefore, human flourishing is not limited only to the early and middle seasons of life. Though bearing children is usually reserved for younger people (with notable biblical exceptions, see Gen 15:1-6, 17:15-22; Luke 1:8-58), and though the young usually have more physical strength (Prov 20:29), flourishing is expected of and promised to all, including those who have entered the third third of life. They can experience rich satisfaction even as they bear rich fruit in the world.

This robust vision of flourishing in the third third of life is not something our culture celebrates. On the contrary, we tend to glorify the strength and beauty of youth. We often assume that as people grow older they lose their capacity to make a difference in the world. We promote a vision of retirement that emphasizes rest and play, assuming that those who are retired have finished living lives of true significance. Our culture desperately needs a new narrative, one in which the vision of flourishing in the third third of life animates and empowers all of us to see the vast potential for those who are in this season of life. This narrative will emerge as we pay close attention to Scripture, seeing with fresh eyes what God intends for all people, including those who are in the third third.

[2] Felicia A. Huppert and Timothy T. C. So. “What percentage of people in Europe are flourishing and what characterises them?” Well-Being Institute, University of Cambridge Prepared for the OECD/ISQOLS meeting “Measuring subjective well-being: an opportunity for NSOs?” Florence – July 23/24, 2009. http://citeseerx.ist.psu.edu/viewdoc/download?doi=10.1.1.550.8290&rep=rep1&type=pdf.

[3] On the promotion of human flourishing” by Tyler J. VanderWeele, Edited by Kenneth W. Wachter, University of California, Berkeley, CA, and approved June 16, 2017 (received for review February 21, 2017). https://www.pnas.org/content/pnas/114/31/8148.full.pdf
For Christians, our understanding of human flourishing is shaped most of all by the life, death, and resurrection of Jesus Christ. Jesus shows us most clearly what it means to flourish. Flourishing, in Christ-centered perspective, is profoundly a matter of sacrificing for others rather than focusing on personal fulfillment. See this short video of Fuller trustee Andy Crouch: https://www.youtube.com/watch?v=3jcWIUoBGaw.

[4] The phrase “third third” to describe what others would call “retirement” or “senior adulthood” or “old age” was popularized by Walter C. Wright, Jr. when he was the Executive Director of the De Pree Center. In 2012, Walt published The Third Third of Life: Preparing for Your Future (IVP Books). In the forward to this book, Max De Pree explains how talk of the “third third” started: “The conversation began as Walt became conscious of being in what he calls the ‘third third,’ life between the ages of sixty and ninety. He saw in me one who has traveled much of this third span. Of course, sixty to ninety years is an artificial construct. Presuming my length of life to be ninety is statistically optimistic.” We at the De Pree Center are continuing to use Walt’s “third third” language, with his blessing, I might add, because it allows us to speak of this season of life without the culturally-perceived negative connotations of “retirement,” “old age,” and similar labels. Like Walt, we see the third third of life as approximately the years from 60 to 90, though recognizing that this is an approximation and that, in fact, the third third of life is itself a collection of various seasons and experiences.

[5] Zechariah and Elizabeth were “getting on in years” when God chose them to be the parents of John the Baptist (Luke 1:7).

A Biblical Vision of Third Third Flourishing by Mark D. Roberts Max De Pree Center for Leadership Fuller Theological Seminary The Bible…
Where Did Jesus Get His Shocking Vision? Jesus’s vision of his messianic work was truly radical, truly shocking.
A Vision of Shared Leadership Shared leadership is sometimes frowned upon. It can surely be more complicated than one-person leadership.…
How to Pray in the Trenches: Pray for What You Really Need Paul’s example encourages us to pray for what we really need, even if it’s something…