Why It Was Great for Me, a 63-Year-Old, to See Godzilla vs. Kong

Yesterday evening I saw the recently released film Godzilla vs. Kong. If you’re not familiar with this particular movie, you can probably imagine what it’s like even without seeing it. Mainly, it’s about two gigantic monsters pummeling each other to death while destroying a lot of stuff in the process.

Now, as you read this you might be thinking, “Awesome! When can I see it?” But I expect quite a few of my readers are thinking, “Mark, why in the world did you spend your time and money on that movie? And why would you say that it was great for you, at 63 years of age, to see Godzilla vs. Kong? Couldn’t you have done something more useful or even more noble with two hours of your third third life?”

Let me answer these questions from three different perspectives.

A Little Harmless Fun is Okay

First, I could explain that I was having harmless fun. I happen to like big monster movies, even if they’re way overdone. Actually, especially if they’re way overdone. That’s more or less the point. Campiness and exaggeration go hand in hand with movies in this genre. That’s why fans like me watch them. And I think it’s just fine, every now and then, to have some mindless fun, as long as you’re not hurting anyone in the process.

Nostalgia Producing Experiences are Good for You

Second, and more importantly, watching movies that feature giant monsters like Godzilla and King Kong is good for the emotional health of someone like me. I don’t mean only that having silly fun can be healthy if done in moderation. I mean that, for people like me, something valuable happens in my brain when I watch big monster movies.

I know I’d better explain this claim because it can sound rather odd. 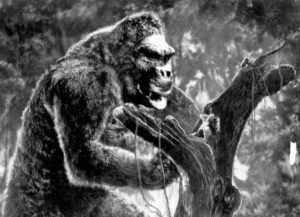 A public domain photo of King Kong, from the 1933 film

You need to know that I grew up watching Godzilla and his fellow monsters, like King Kong, on television. During my early teen years, a local channel in Los Angeles would feature one big monster movie a week, running the same film five evenings in a row. This meant that my brother and I watched most of the films in this genre several times over. I have fun memories of plopping down in our family room with my brother, viewing hours upon hours of black and white monster movies, feeling scared at times but mostly laughing at the silly scripts and special effects. (Early on, Godzilla was played by a man in a rubber suit! Now, of course, CGI rules.)

So, when I see a monster movie today, I become quite nostalgic, remembering good times from my boyhood. The person who watched Godzilla vs. Kong last night was both a 63-year-old man and a 13-year-old boy. (In fact, there was a King Kong vs. Godzilla movie made in 1962, which I watched many times. The trailer is hilarious.)

As it turns out, when I watch big monster movies I’m not only getting in touch with my inner child. I’m also engaging in nostalgia that turns out to be good for my 63-year-old brain. That’s right. Nostalgia can be good for you. Not all nostalgia works this way. Yearning for the “good ol’ days” so much that you get stuck in the past isn’t healthy. But remembering the “good ol’ days” in a bittersweet way actually makes a positive difference in how you think and feel today.

I’m not making this up. Rather, I’m drawing from a considerable body of research into nostalgia, much of it done by a group of scholars from the University of Southampton in the U.K. who formed the Nostalgia Group to study the phenomena and curate the research of others. These scholars found that nostalgia was not the negative thing it was one time supposed to be. Rather, they discovered that nostalgia “confers psychological benefits. When engaging in nostalgic reflection, people report a stronger sense of belongingness, affiliation, or sociality; they convey higher continuity between their past and their present; they describe their lives as more meaningful; and they often indicate higher levels of self-esteem and positive mood” (from the Nostalgia Group website). Moreover, a series of studies by scholars of the Nostalgia Group found that nostalgia “increases charitable intentions . . . and charitable behavior” largely by augmenting one’s capacity for empathy. (If you’d like more information on all of this nostalgia research, check out the Nostalgia Group website, or this New York Times article, or this TEDEd animation.)

So, by watching Godzilla vs. Kong, and thereby feeling the bittersweet longings of nostalgia, I was doing good things for my brain. Some of these good things, it turns out, actually help me to be a more charitable and generous person.

Nurturing Relationships with People Who Matter

There’s a third reason why it was great for me, as a 63-year-old person, to watch Godzilla vs. Kong yesterday. This has to do with the people who watched it with me. My “watch party” included my son, my brother-in-law, my nephews, and my daughter’s boyfriend. We all enjoyed this film together.

You could make a strong case for the benefit of my sharing in this cinematic experience with them even if I wasn’t personally blessed by watching Godzilla and King Kong duke it out. Why? Because one of the very best things you can do for yourself as you age is to develop strong primary relationships. In fact, having strong, healthy relationships may just be the most important thing you can do if you want to flourish in the third third of life.

Once again, I’m not making this stuff up. I learned it from the directors of longest study of adult development ever undertaken. The Harvard Study of Adult Development has tracked the lives of 724 men for over 75 years, asking all kinds of questions about their lives and scrutinizing all sorts of personal data (medical, occupational, psychological, etc.). When the study began in 1939, all Harvard students were male, which is why the study focuses on men only. In-depth information about women was added from the Terman Study at Stanford.

Key findings from the Harvard Study were presented by its current director, Dr. Robert Waldinger, in his extremely popular TED talk (over 35 million views since 2015). In “What Makes a Good Life? Lessons from the Longest Study on Happiness,” Waldinger summarizes its findings in this way:

So what have we learned? What are the lessons that come from the tens of thousands of pages of information that we’ve generated on these lives? Well, the lessons aren’t about wealth or fame or working harder and harder. The clearest message that we get from this 75-year study is this: Good relationships keep us happier and healthier. Period.

Research shows that intergenerational relationships, in particular, have notable benefits. When older adults spend time with younger folk, both parties prosper. According to researcher John Medina, in his book Brain Rules for Aging Well, intergenerational engagement “reduces stress, decreases rates of affective disorders such as anxiety and depression, and even lowers mortality rates” (p. 24). A study of 27 programs that brought together older adults and children found that the third third folk experienced benefits related to “well-being, depression, self-reported health, and self-esteem” (International Psychogeriatrics [2018], 30:4, 451–468).

So, that fact that I was enjoying Godzilla vs. Kong with important people in my life was good for my emotional and physical health. And the fact that several of them were from younger generations added even more benefit. Here I thought I was just having fun. Turns out I was helping myself to be healthier and happier.

Now, I’m not suggesting that you and I start calculating the benefits for ourselves of everything we do. That would be painfully self-absorbed. Moreover, you don’t have to mount a spirited defense based on research every time you decide to do something mindlessly fun. But it is worth noting that certain enjoyable things, like watching movies that remind you of your youth or hanging out with people who matter to you, can actually contribute to your personal flourishing.

Running from Godzilla In fact, we are not to have nothing whatsoever to do with the works of…
The Third Third Language Challenge: Are You Old? Or a… On the term "perennials," Barbara Cartensen says, "The symbolism it connotes is perfect. For one,…
How Does God See You? How do you imagine God looking upon you?
Leadership Wisdom – Who You See is Who You’ll Be What does it mean that the pure in heart will “see God”?