Sarah Magidoff always thought being an architect was her one special calling in life. This desire arose when she was four years old, and she spent the rest of her adolescence seeking the education and experiences needed for a career in architecture. By her mid-twenties, it seemed she had arrived: she received a prestigious architecture degree and then a job in a high-end architecture firm in the competitive heart of downtown Los Angeles. But, as we’ll see, after a series of difficult circumstances, Sarah slowly realized that the pressure, expectations, and stress to prove that she could live up to her calling just didn’t seem worth it.

While Sarah had felt drawn towards design and architecture since childhood, it wasn’t until college that this became a full-fledged calling. After getting accepted into USC’s architecture program, she had a vision of God unfurling a red carpet between Northern California (her home) and Southern California (her new school). As if God were paving the way for her, this cemented her call for her future path.

Sarah’s sense of call was like a compass that guided her back to the path when things got tough. The life of the architect-in-training was very demanding. “I was always in the design studio and had long hours with little sleep,” she recalls. Many times, she wanted to give up and quit. This was also at the height of the 2008 economic recession in the United States, and job prospects for a budding architecture were slim. But, “I was willing to put in the hard work, sacrifice, and push through these setbacks to attain the dream,” she says. “There was nothing else I wanted to do.”

After finishing her degree, Sarah acquired an internship at an architecture firm in downtown L.A. Everything she’d been working towards was finally paying off. “I loved it,” she says. “It was everything I dreamed of.” Because of her hard work and dedication, her internship soon transitioned into a full-time job.

So, there she was, in her mid-twenties with a glamorous, high-paying job in her desired field, living her calling, when things began to decline. “After about a year, the glossiness of the job began to wear off,” she says. Work got more demanding: the American economy was recovering, her firm was accepting more projects, and clients were over-taxing. The honeymoon period was ending, and the reality of a burdensome job was setting in.

What broke Sarah’s architecture career was an assignment, that from all external appearances was the opportunity of a lifetime. As soon as her boss assigned her the project, Sarah, envisioning everything else on her overstuffed plate, excused herself to the restroom. Tears of exhaustion, self-doubt, and feelings of failure flowed before she hit the bathroom stall. “I hid in the stall and cried, ‘What am I doing? What do you want from me, God?’” She remembers, questioning everything she’d worked towards since childhood. “I was on this career path for such a long time,” and she was sure God had a specific and special plan for her. Now, all that seemed to be crumbling down.

So, there she was, in her mid-twenties with a glamorous, high-paying job in her desired field, living her calling, when things began to decline.

Yet God spoke to her in that still, small moment. She saw God holding out a hand and saying, “Are you ready? It’s time.” She understood that God had not really been at the center of her life during this time, because her perceived calling had been about her glory rather than God’s. In that instant, Sarah’s heart melted. She grasped God’s hand and said emphatically, “I trust you.”

With a reorientation of God as her center, Sarah put in her two weeks notice, but was filled with mixed emotions. On the one hand, there was a sense of relief from the pressures to perform and be perfect in her calling. On the other, her self-doubt, desperation, and loss were acute. She not only grieved the end of her short-lived career, but felt as if her calling, which she’d thought set in stone, was gone. She had no clue what to do next.

For the next two years, Sarah embarked on a meaningful, but scary, vocational search. She accepted a variety of creative freelance projects that came her way. It wasn’t until she serendipitously designed a logo and website for a friend’s company that her sense of calling came roaring back. As soon as Sarah’s friend saw the design mock-ups, she broke into tears because of how perfect they were. This validation spurred Sarah to continue to take on design projects. After about four years of this, it dawned on her: “I think I’m running a graphic design studio.”

While Sarah thrived in having her own company, it was not without struggle. Yes, she loved many things about it, such as being her own boss and helping others express their dreams through design. But even though Sarah could set her own pace and call the shots, she found herself perpetually tired, overworked, and stressed out.

This burnout left Sarah with an important lesson about her sense of calling. Yes, she had always been a designer at heart, and she had previously directed these instincts towards architecture. But now, she realized she wasn’t necessarily called towards a specific medium or cause. “My calling is towards a lifestyle,” she says, “of work-life balance.” Part of her problem in both architecture and owning her own business was reflective of the broader American work-culture. Sixty- to eighty-hour workweeks are the norm; workers forego breaks; we check emails on vacation; all of which leads to stress, anxiety, and the inability to unplug and rest. “There’s a shift that needs to happen,” she says. And this has become her burgeoning sense of calling.

“My calling is towards a lifestyle,” she says, “of work-life balance.”

With her designer expertise and call towards a healthy lifestyle, Sarah has pioneered the #SlowEntrepreneur hashtag on social media. She uses her Instagram platform to speak up for the overworked and encourages them into better work-life balance. Sarah is transforming this message into inspirational blogs, workshops, and a potential book.

But perhaps more important than the medium through which she channels her call is the perspective Sarah has adopted. Previously, her pursuit of architecture was about advancing her own career. Now, her calling is less about her own career advancement and more about feeling balanced and helping others. She’s pioneering this movement in order to help others experience rest, and ultimately freedom, from the need to find worth through achievements or status.

When reflecting on her evolving sense of call, Sarah still feels a sense of loss over her architecture career. Her adolescence was shaped by this vision for her life, and she often still feels like a non-practicing architect. Yet, despite how formative this passion was, she admits how it limited her and is glad her calling is more rooted in God and serving others. When asked about what’s next, Sarah can only reflect on the vision of grasping God’s outstretched hand, full of both uncertainty and confidence, and say, “I trust you, Lord.” 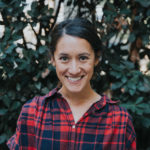 Sarah Magidoff is the founder of Canopy, a boutique creative studio offering graphic design and brand strategy packages for emerging creative businesses. She also founded the Instagram hashtag movement #SlowEntrepreneur. The Slow Entrepreneur movement is a community of entrepreneurs redefining what it means to “hustle” and achieving sustainable success through the cultivation of healthy work-life boundaries.