A Third Look at What Matters: Gospel, Society, and Ministry 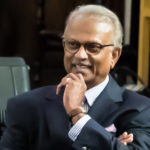 Rev. Samuel Chetti is well-known, and much loved in American Baptist circles on the West Coast. He was the Executive Minister for The Region of American Baptist Churches of Los Angeles, Southwest and Hawaii Baptist Churches. He served from 1994-2018. He is a gifted and expansive thinker who is also known for his compassion and heart for people. Now recently retired, he shared some of his reflections on what matters to him: Christian discipleship and life in our cultural context.

Sam was born in India, where he earned a B.S. in Bio-Chemistry and Physics, with a minor in Astrophysics. Still finding it difficult to attain funding for further studies in his field, he decided to do graduate work in Business Administration in the US. Although Sam went on to other things, he never entirely lost his interest in theoretical and applied sciences. “English is not my first language. It is imagination, formulas, and equations.” Once in the US, moving from pure science to social sciences, Sam would go on to earn a B.A. in Social Psychology and Theology with a minor in Comparative Religions. After this, he pursued a graduate degree in Business Administration. He was awarded an honorary Doctor of Divinity by The American Baptist Seminary of the West. He even taught a class at USC, where Steve Hawking came and lectured a session.

A pastor encouraged Sam into ministry. So, he opened a coffee shop at his Baptist Church where he arranged for students from Fuller Seminary, Azusa Pacific University, and Talbot Seminary to come and talk to persons who walked in off of the streets.

In his final year in graduate studies in Management, he was selected for an IBM internship. While at IBM, he was active in local American Baptist Church lay ministries. During that time, he received his call to go into youth and young adult ministry. When he informed his supervisor that he would have to leave IBM, his supervisor asked, “Who is stealing you from us?” Sam’s supervisor asked. It turned out God was “stealing” Sam from IBM. His supervisor was furious and almost hysterical. Sam offered to pay them back for the money they had invested in him but his now-former supervisor said to keep it; he was “going to need it.” Sam continued on to ministry engaging in international defenses for the faith, working as a chaplain at USC and UCLA and running an American Baptist Region, and much more.

Now recently retired, Sam still has that classic spark and hunger for wisdom with knowledge. He describes this third part of life as a time of pursuing his avocations and enjoying photography. He excitedly explained to me how he was trying to work out links between quantum physics, neuro consciousness, and the human soul. His project is applying a quantum mechanics inspired worldview to influence Newtonian determinism that he saw as limiting hermeneutics. And finally, he was in the process of putting together 25 years of experience of multi-ethnic leadership in an urban context and distilling it into concepts useful for pastors and non-profit organizations to enhance thriving systems.

Sam reflected on his time as Executive Minister. Although his vocational ministry was fulfilling, he felt limited as a representative of a denomination. At the start of his career, he worked in more of a grassroots context bringing individuals off of the streets, working at a Help Line ministry, or even just driving unchurched youth to attend church and enjoy Sunday pancakes. Now, with all of his experience and more freedom, Sam wants to work more overtly to expand the kingdom of God in areas often neglected by the church including in the LGBTQ+ community. He seeks to promote dialogue between this community and evangelicals.

Of course, there are pain points. Sam has recently moved to a different state away from many of the colleagues, friends, and relationships he has built over the years. He still mentors many pastors, but it is not the same as being able to drive over to grab a cup of coffee or lunch with them. And it is difficult coming from an incredibly diverse denomination to a place where he is one of two people of color in the congregation. On the other hand, he spends more time with his wife, and his understanding of what matters most has only deepened and expanded. Even if he is retired from his “vocation” as Executive Minister, he sees this third stage as a continuation of the many avocations he began since 1964. Avocation is how he has always lived out meaning in his life. Now, there is “no yoke of administration” on his shoulders, he is free to pursue his imagination and vision for deeper meaning.

When I asked Sam what avocation was, his answer did not disappoint me:

Allison Quient is a PhD student at the University of Aberdeen studying Systematic Theology and New Testament. She is the author of Eve Christology: Embodiment, Gender and Salvation published by the Canadian-American Theological Review, and author of Equating “Feminisms,” published by Christians for Biblical Equality.

Leadership Temptations: What Does Success Look Like? It’s easy to focus on spectacular progress and dramatic results.
Jesus is Coming; Look Busy! I don’t know if, as you’re reading these words, you are poor or rich, tired…
Ministry and Relationship: The Example of Paul Paul’s letters reveal the personal nature of his relationships with his churches. He often describes…
Webinar: Pastors, do you have what it takes to keep going in… Watch the Webinar Now. This webinar was sponsored by Fuller’s De Pree Center and was…