Stories of sexual harassment continue to get top billing in the news. It seems that each day another prominent man—a leader in government, entertainment, business, news, or whatever—resigns or is fired or is in serious hot water owing to believable accusations of grossly inappropriate behavior in the workplace. Most of these accusations come from women who have been victims of sexual harassment. A few come from men who have been harassed.

Like millions of others, I am deeply grieved by what is happening. Some of the men who have been accused are people I have respected for their artistic talent, their insightful journalism, or their effective leadership. I’m saddened to learn that men I have admired have made such poor choices and now must rightly suffer the consequences. Even more, I’m distressed to think of what the people they harassed experienced. And, even beyond this, I am greatly grieved to think of the how we have created, sustained, excused, and rewarded a culture that has allowed so many women (and quite a few men) to feel so disrespected and disempowered.

Thus, while I am sad each day when I read of women who have been harassed by some man who has acted inappropriately and who now must pay the price for his behavior, I am also glad that we are finally beginning to deal with something that is long, long overdue. Again, it isn’t only that victims are getting justice, but that the deeper values and practices of our unjust society are being examined, criticized, and, I hope, changed for the better.

Or at least I hope this is happening. I do have some fear that, after the dust settles, and after new laws and regulations are enacted, we may very well have failed to deal with what seem to me like some of the most important questions of all. I’m thinking of questions like:

How can we create and sustain work cultures in which all people are respected by their superiors and colleagues?

How can we nurture a climate in which deep respect for others is the norm and harassment of any kind is rare?

How can we raise young men to treat all others, especially women, respectfully, whether at college parties, families, or in their place of work?

Beyond the pressing issues associated with sexual harassment, how can we foster communities in which all people are accorded true dignity?

Without question, people in power must be trained how not to harass those with less power, no doubt about it. But, wouldn’t it be even better if those in power had be trained to treat all people with respect, such that occasions of harassment were extremely rare, even apart from rules and regulations? 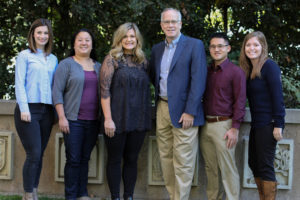 For me, all of this is not just a matter of professional concern. It is also very personal for me. In part, I want my wife, my daughter, and my son to be treated well in their workplaces. But also I am deeply and personally concerned for the people who work in the workplace over which I am responsible (at right: the outstanding staff of Fuller’s Max De Pree Center for Leadership, December 2017.) I care for each one of them and want them never to be mistreated, by me or any other person. Moreover, I want them to flourish in an environment of safety and support.

What do I mean by dignity? Merriam-Webster offers this definition: “the quality or state of being worthy, honored, or esteemed.” “Dignity” comes from the Latin root dignus, which means “worth” or “worthy.” That’s what I’m talking about. I want the people who work for me, no matter their gender, to feel worthy of respect, honored by their boss and their colleagues, and esteemed for their work and for their humanity. In a day when many women do not experience dignity in their workplaces, I’m especially eager for the women who work for me to be treated with dignity, always, by me and by all with whom they work.

In the meanwhile, if you’re looking for ways to encourage and empower women in the workplace, you might be interested in a free workbook that we have produced at the De Pree Center where I work. It’s called “A Seat at the Table.” We lay out a biblical case for giving women, not only the task of “setting the table,” but also having a “seat at the table,” a place where they and their voices matter.

Dr. Mark D. Roberts is the executive director of Fuller’s De Pree Center and the primary writer of the Life for Leaders daily devotions. His most recent book is a commentary on the New Testament letter to the Ephesians (Zondervan, 2016). Mark and his wife Linda, an executive coach and spiritual director, have two adult children and one lively Golden Retriever.

Going Beyond Right Answers We need to live the truth we speak. We need to love God and our…
Going Beyond Self-Justification God’s kindness leads us to turn away from sin and to turn toward a life…
Webinar: Beyond Diversity Training: How can I live out… Is there a way to get beyond "diversity training" that isn't merely driven by liability…
Following Jesus Today: Healing Beyond Healing Healing was central to the ministry of Jesus. When he healed people, he demonstrated the…