As they led him away, they seized a man, Simon of Cyrene, who was coming from the country, and they laid the cross on him, and made him carry it behind Jesus.

Simon of Cyrene was watching Jesus carry his cross to Calvary when, all of a sudden, he was pressed into service by the Roman soldiers. He had to carry the cross when Jesus was no longer strong enough to do so. In a way, we who follow Jesus are like Simon. We heed Jesus’s call to take up our “cross,” putting aside self-interest as we offer all that we are to the Lord.

What a shock this must have been for Simon! After traveling almost a thousand miles from Cyrene in northern Africa to Jerusalem (Cyrene was where Libya is today), he found the city jammed with pilgrims. They, like Simon himself, had come to celebrate the Passover in Jerusalem. 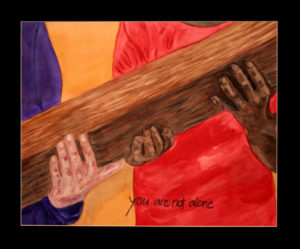 It’s likely that Simon set up camp out in the countryside alongside tens of thousands of other visitors. On his way into the city one day, he stumbled into what might have looked from a distance like a parade. But then, as he drew near, Simon saw the horrific spectacle of a badly beaten man stumbling as he was forced to carry the beam of his cross on the way to being crucified. We don’t know whether Simon had any knowledge of Jesus prior to their encounter on the road to Golgotha. It’s likely that he knew nothing about the suffering man before that moment.

As Simon watched in horror, all of a sudden he found himself pressed into action. The Roman soldiers, recognizing that Jesus didn’t have sufficient strength to carry his cross by himself, “seized” Simon and demanded that he carry the cross instead. No doubt Simon was hesitant, fearing that he might end up sharing Jesus’s fate. Yet he knew enough not to provoke the soldiers, so he took the cross as ordered. We don’t know much more about Simon than this, since he disappears from the biblical record at this point (see note below for more information on Simon).

Although Simon only helped to carry the cross of Jesus and was not actually crucified, he nevertheless illustrates a profound theological truth found in the letters of Paul in the New Testament. In the letter to the Galatians we read:

I have been crucified with Christ; and it is no longer I who live, but it is Christ who lives in me. And the life I now live in the flesh I live by faith in the Son of God, who loved me and gave himself for me. (Galatians 2:19b-20)

The letter to the Romans contains even more detail about what it means to be crucified with Christ:

What then are we to say? Should we continue in sin in order that grace may abound? By no means! How can we who died to sin go on living in it? Do you not know that all of us who have been baptized into Christ Jesus were baptized into his death? Therefore we have been buried with him by baptism into death, so that, just as Christ was raised from the dead by the glory of the Father, so we too might walk in newness of life.

For if we have been united with him in a death like his, we will certainly be united with him in a resurrection like his. We know that our old self was crucified with him so that the body of sin might be destroyed, and we might no longer be enslaved to sin. For whoever has died is freed from sin. But if we have died with Christ, we believe that we will also live with him. We know that Christ, being raised from the dead, will never die again; death no longer has dominion over him. The death he died, he died to sin, once for all; but the life he lives, he lives to God. So you also must consider yourselves dead to sin and alive to God in Christ Jesus. (Romans 6:1-11)

When we put our faith in Christ, we shared in his death, not by literally dying, but by dying to sin. Our “old self” is crucified so that we might be set free from our bondage to sin. Thus, we are alive in Christ, who lives in us.

Therefore, in a sense, we identify with Simon of Cyrene, who found himself a surprised participant in the crucifixion of Christ. Like Simon, many of us became Christians without really understanding that we were dying to our old selves so that we might live anew in Christ. We were pitched a gospel of salvation and eternal life without the corollary call to servanthood, sacrifice, and death to sin and self. Thus, it was only later in our Christian pilgrimage when we discovered, like Simon, that we were expected to be “crucified with Christ.”

Unlike Simon, however, we aren’t forced to pick up the cross of Christ. Jesus doesn’t use his power and authority to coerce us into being his disciples. Rather, he invites us to follow him even though, as our Lord, he could demand this of us. Instead, Jesus beckons to us, calling us to take up the cross for him even as he took up the cross for us. As he once said to those who were interested in following him:

If any want to become my followers, let them deny themselves and take up their cross daily and follow me. For those who want to save their life will lose it, and those who lose their life for my sake will save it (Luke 9:23-24).

If we take up the cross of Christ, we will lose our lives, only to discover that we have found true life in him.

During this Holy Week, we reflect on the meaning of Christ’s death on the cross. We marvel at what he did for us and our salvation. As we do, we also remember the call of Jesus to imitate his sacrifice as we devote our whole lives to him and as we express this devotion by serving others in every sector of life.

Use your imagination to put yourself in Simon’s shoes. How would you have felt when you were compelled to carry the cross of Jesus?

How do you understand what it means to be “crucified with Christ”?

What does it mean for you, in your daily life, to take up your cross and follow Jesus?

Choose to do something today in service to the Lord. It will likely be serving another person in his name.

Lord Jesus, the powerful example of Simon reminds me that I am also to take up my cross and follow you. You have called me to die to myself so that I might live for you. I confess that sometimes I resist this call, even though I know that in dying to myself I find true life in you. So help me, Lord, to carry my cross, to give my life away so that I might receive the abundant life of your kingdom.

I could not do this were it not for the fundamental fact that you took my place on the cross. Through you, I am forgiven and invited into the fullness of life. In your death, I am raised to new life. All thanks and praise be to you, Lord Jesus, for bearing my sin on the cross, so that I might bear the cross into eternal life, both now and forever. Amen.

A Historical Note about Simon of Cyrene

The Gospel of Mark names Simon’s sons as Alexander and Rufus, presumably because these men were known to the community for whom Mark was writing (Rome? see Mark 15:21). Paul also mentions a Rufus in the close of his letter to the Romans (Romans 16:13). He might be the son of Simon, but this is only speculation. Some second-century Gnostics argued that it wasn’t Jesus who died on the cross, but Simon of Cyrene. There’s no basis for this in reliable historical texts. Some Muslims also hold this view, since they deny that Jesus died on the cross. Because of Simon’s North African origin, it’s likely that he was a Black man.

Holy Week, Stations of the Cross

Church Leadership Institute Who we are  | What we offer  | Who we serve Click the Links to…
Resources for Lent The De Pree Center offers a variety of resources to help you grow in your…
Stations of the Cross Stations of the Cross: A Devotional Guide for Lent and Holy Week Written By Mark…
Leadership Exhaustion and a Spirit of Adventure "You know that the antidote to exhaustion is not necessarily rest?" "The antidote to exhaustion…