[The] scroll of the prophet Isaiah was given to [Jesus]. He unrolled the scroll and found the place where it was written: “The Spirit of the Lord is upon me, because he has anointed me to bring good news to the poor. He has sent me to proclaim release to the captives and recovery of sight to the blind, to let the oppressed go free, to proclaim the year of the Lord’s favor.” And he rolled up the scroll, gave it back to the attendant, and sat down. The eyes of all in the synagogue were fixed on him. Then he began to say to them, “Today this scripture has been fulfilled in your hearing.”

Through his death on the cross, Jesus conquered sin and brought us into new life. Individually, we are saved by God’s grace given through Christ. Yet the death of Christ also brought peace to a broken world. It forged reconciliation between divided and hostile peoples. It made possible the experience of God’s peace in this world, a peace infused by justice, shaped by love, and embodied in unity. We who follow Jesus celebrate what he accomplished on the cross. We also commit ourselves to joining his mission on earth until that day when God’s kingdom is complete and all things and all peoples are united in Christ.

In yesterday’s Life for Leaders devotion I began to examine the shocking statement of Jesus in Luke 4. While attending synagogue in his hometown of Nazareth, Jesus read a passage from Isaiah 61. There, the prophet spoke as if he were the “anointed one” of Israel, the messiah who would bring good news to the poor, release to the captives, healing to the blind, and freedom to the oppressed. After reading this prophecy, Jesus said, “Today this scripture has been fulfilled in your hearing” (Luke 4:21). In other words, he said, “I am the one anointed by God to fulfill Isaiah’s prophecy. I am the messiah who will bring good news, release, healing, and freedom.” 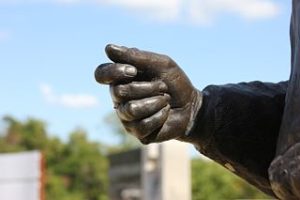 Throughout the centuries, followers of Jesus have tried to figure out exactly how Jesus fulfilled the messianic words of Isaiah and other Old Testament prophets. Jesus did not, after all, do what many expected him to do: raise up an army to expel the Romans from Judea so that he might reign over God’s earthly kingdom. What, then, did he accomplish? How did he fulfill the messianic job description found in Isaiah?

Many have interpreted Jesus’s use of Isaiah in a metaphorical or spiritualized way. Jesus brings good news, not to the materially poor, but to the poor in spirit. He releases captives caught in sin and spiritual bondage. He heals those who are “blind” by revealing God’s truth. He frees all who are oppressed by the guilt that comes from sin. As a boy growing up in church, I was taught that this is what Jesus meant when he claimed to fulfill the prophecy of Isaiah. That made sense to me because I experienced the salvation of Jesus in this non-literal mode.

But as I have studied Scripture more carefully, especially the Old Testament prophets, and as I have examined closely the teachings and works of Jesus, I have come to believe that my early understanding of Jesus’s mission was too narrow. Yes, he surely offers salvation to those who are spiritually poor, captive, blind, and oppressed. But also Jesus proclaimed and inaugurated the reign of God on earth. He came to offer deliverance to those who were literally poor, captive, blind, and oppressed. His messianic work was not limited in the mode of my upbringing. It was far more widespread and far deeper. Ultimately, as Jesus broke the power of sin through his death on the cross, he brought not only individual salvation, but also the full peace of God, including justice, reconciliation, and restoration. (See, for example, Ephesians 2:1-22.)

The world-changing work of Jesus has begun, to be sure. In this we rejoice, but there is still much more to be done as Jesus works today through those who follow him. The complete reign of God will come only through God’s own effort. We don’t make God’s kingdom come. But, as we wait for the fullness of the kingdom, we can and should join in the life-changing, world-changing, kingdom-extending mission of Jesus today.

As I try to envision the “already and not yet” work of Jesus, I find a fitting illustration in the holiday known as Juneteenth. On June nineteenth of every year (hence “Juneteenth”) many people celebrate the emancipation of black Americans from slavery. Though the Emancipation Proclamation, which officially ended slavery, became effective on January 1, 1863, many parts of the country did not know this, including Texas. But on June 19, 1865, the people of Texas were officially informed that all slaves were free. Several years later, black people and others in Texas began celebrating “Juneteenth” as a day of freedom. In 1979, Texas made Juneteenth a state holiday. Since then, almost all other states have followed suit. (For an insightful overview of Juneteenth, see this piece by Henry Louis Gates, Jr.)

Juneteenth is, of course, particularly relevant in our time of history, when issues of racial justice are rightly and excruciatingly on the forefront of our consciousness. But I am using this example not only because of its timeliness, but also because it helps us understand the work of Jesus in at least two ways. First of all, Juneteenth reminds us that the mission of Jesus has everything to do with the liberation of people in today’s world. Wherever people are victims of prejudice, held down by racism, and/or oppressed by unjust systems, Jesus and those who follow him faithfully are working for their liberation and flourishing. There are still poor who need good news, captives who need release, blind who need to see, and oppressed who need freedom.

Second, Juneteenth also helps us celebrate even when the work before us isn’t finished. After all, Juneteenth is a celebration of liberation. But this celebration does not imply that liberation for black Americans has been fully accomplished. Yes, the flagrant evil of slavery was abolished, but “liberty and justice for all” is still very much a work in progress. Recent events, protests, and prayer meetings in our country have pointed out just how far we have to go when it comes to defeating racism and its permeating implications.

Through his death on the cross, Jesus conquered sin and brought us into new life. Individually, we are saved by God’s grace given through Christ and received in faith. Yet the death of Christ also brought peace to a broken world. It forged reconciliation between divided and hostile peoples. It made possible the experience of God’s peace in this world, a peace infused by justice, shaped by love, and embodied in unity. We who follow Jesus celebrate what he accomplished on the cross. And we also commit ourselves to joining his mission on earth until that day when God’s kingdom is complete and all things and all peoples are united in Christ (see Ephesians 1:10; 2:1-22). Today, we follow Jesus both in our celebrating and in our striving.

How do you understand the mission of Jesus as expressed in Luke 4:18-21?

Why do you suppose that it is easy for us to think of the work of Jesus in limited terms?

How are you participating in Jesus’s work in the world today?

Talk with your small group or a trusted Christian friend about the mission of Jesus and its relevance to your life. Be open to the possibility that God might be calling you to something new.

Help me, Lord, to follow you in your mission. Give me eyes to see how I might be an instrument of your peace, justice, and love in my part of the world.

Today I join with others who celebrate Juneteenth, thanking you for the emancipation of slaves in America. Yet I also pray for your continued work of liberation. May your justice come for all in this country, especially for black Americans. May their lives matter, not only in words, but also in deeds, in laws, in systems, and in institutions. Help us, Lord, to finish what we have begun as a nation, rejecting the racism that has infected our hearts, minds, and institutions. Thy kingdom come. Thy will be done on earth as it is in heaven. Amen.

This devotion is part of the series Following Jesus Today.

Find all Life for Leaders devotions here. Explore what the Bible has to say about work at the unique website of our partners, the High Calling Archive, hosted by the Theology of Work Project. Reflection on today’s Life for Leaders theme can be found here: When the Messiah Is Not Who You Expected