How to Add 7.5 Good Years to Your Life 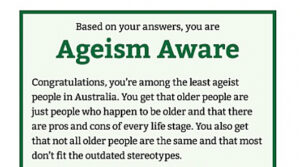 I have good news to share. I am officially Ageism Aware. That’s true, at least according to one of those internet quizzes that pop up all over the place. Whether that quiz was based on serious research or not, I don’t know. But I’m pleased to end up in the Ageism Aware category vs. the other option: Ageist Affected. The most surprising news of all is that I am among “the least ageist people in Australia.” Wow! Australia! I guess that’s really saying something, given the fact that I’ve never been to Australia. My anti-ageism must be legendary over there.

Now, you may be wondering why I’m playing around with ageism quizzes on the internet. No, I’m not bored. And I’m not basing our Third Third Initiative on peculiar internet quizzes. But I do try to keep aware of what’s happening in the world when it comes to third third issues and experiences. While following a recent series of stories related to ageism, I discovered a link to the quiz. The rest is history. I am now a proud Ageism Aware Aussie. No worries, mate!

The stories I was following when I found this quiz had titles like, “The Way You Think About Aging Affects Your Well-Being, Self-Esteem And How Long You Live” (by Bonnie Marcus, Forbes, April 12, 2022) or “How you can change your views of aging and improve your life” (by Judith Graham, The Philadelphia Inquirer, April 23, 2022). These stories, it turns out, were inspired by the publication of a new book: Breaking the Age Code: How Your Beliefs About Aging Determine How Long and Well You Live, by Becca Levy. Levy, a professor of public health and psychology at Yale, does research that “explores psychosocial factors that influence older individuals’ cognitive and physical functioning, as well as their longevity” (according to her Yale webpage).

Levy’s book is fascinating and, I might add, a pleasure to read. A top-flight academic, Levy communicates effectively with a popular audience. She takes on the ageism that permeates our culture, and not just American culture, but many of the cultures throughout the world. She notes, for example, that according to the World Health Organization, “ageism is the most widespread and socially accepted prejudice today” (p. 16). But, while Levy advocates for social change to combat ageism (see chapter 10), much of her book focuses not on the ageism out there in the world, but in here, in our own hearts and minds. Because we swim in water permeated by negative attitudes about age, we quite naturally soak up much of that water. This means that most of us have negative feelings about our stage of life and even who we are!

Our tendency to absorb ageism leads to many negative results. Several are intuitive. If I think poorly about aging, then it’s pretty obvious that my self-image will take a pounding when I enter the third third of life. When I look in the mirror and see wrinkles and white hair, I can feel bad about myself. But this is just the beginning. The chapter in Levy’s book that spawned so many articles shows that internalized ageism can actually take years off your life expectancy (chapter 6, “Longevity Advantage of 7.5 Years”). Or, to put it more hopefully, if you have positive thoughts and feelings about aging, then you can add years to your life, statistically speaking.

Not just years, but 7.5 years! That’s what Becca Levy found in research she did as a graduate student. Basing her work on the Ohio Longitudinal Study on Aging and Retirement, Levy was startled to discover that “Participants with the most-positive views of aging were living, on average, seven and a half years longer than those with the most-negative views” (p. 93). Levy found that “Age beliefs stole or added almost eight years to their lives, conferring an even better survival advantage than low cholesterol or low blood pressure (both of which added an extra four years of life) or low body mass index (one extra year) or avoiding smoking (three extra years)” (p. 93). (Levy’s original study can be found here.)

Levy’s surprising conclusion motivated me to do a little more searching for similar studies. I found one based on evidence from Ireland that showed how people with negative attitudes toward aging have slower walking speeds than those with positive attitudes. (Walking speed is a common measure of vitality among older adults. See “Negative Perceptions of Aging and Decline in Walking Speed: A Self-Fulfilling Prophecy.”) Another study “confirmed a negative association between ageism and older adults’ psychological well-being” (“Ageism and Psychological Well-Being Among Older Adults: A Systematic Review”).

How Can I Have a Positive View of Aging?

This leads to an obvious question: How can I have a positive view of aging? Unfortunately, there’s not a simple answer to this question. Most of us cannot move to a culture that is more positive about older adulthood (China, for example), even if we wanted to. This means the air we breathe each day will be permeated by ageist particulates, and there aren’t masks for these things. You can’t help sucking them in. So, what will help us develop a counter-cultural perspective on aging, one that adds both quantity and quality to our lives?

To answer this question, I find it helpful to read books like Breaking the Age Code by Becca Levy. She helps me to see things more clearly and to be more careful about how I am thinking, feeling, and living. I also am encouraged by books that tell stories of older people making a difference that matters in the world (like Marc Freedman’s How to Live Forever). But, for me to have a truly positive attitude toward aging, I need more. I expect you do too.

The Bible vs. Ageism

It won’t surprise you to see that I start with a biblical theology of life, including aging. Scripture promises that the righteous will flourish, even in old age (Ps 92:12-14). The Bible also celebrates being old (for example, Prov 20:29) and instructs younger people to honor their elders (Lev 19:32). God calls older people to crucial missional tasks (Abraham and Sarah, Moses, Elizabeth and Zechariah, etc.). God’s inspired Word teaches us to see the third third of life as a time for God-honoring flourishing and fruitfulness.

But I believe that we need more than just the Bible to help nurture positive perspectives of and feelings about aging. The Bible, after all, is God’s gift, not just to individuals, but to the Christian community (and, ultimately, to the world). If we’re going to withstand and overcome the pervasive and pernicious cultural negativity about aging, we need the support, wisdom, and encouragement of our church.

The Church vs. Ageism

Here’s where things get interesting, of course, because churches can easily buy into culturally common ageism. For example, churches with ministries to “seniors” often focus mainly on special care for older adults with major health issues. This is a crucial ministry, to be sure. But it often reflects the assumption that older adults are generally in need and unable to contribute to the church’s ministry. Moreover, crisis-caring seniors ministry isn’t actually relevant to the majority of older adults, who at any given time are physically and mentally strong, and who, by the way, don’t want to be called “seniors” or “senior citizens.” Churches usually fail to recognize the extraordinary kingdom potential that lies within their older adult congregants.

What might it be like, I wonder, to be part of a church that sees and values the kingdom potential of older adults? I don’t really know how to answer this question because I’ve never been part of a church like this. But I do see glimmers of hope. Last week, for example, I worshiped in a church where the pastor talked about how the older adults in his congregation were essential to the church’s ministry to young adults. Wow! Earlier this year, I had the opportunity to talk with a pastor for a church composed mainly of older adults. He encourages his congregants to be active in Christian service, both in the church and in the world. Each year, for example, the members of that church prepare tens of thousands of gift boxes for children served by Operation Christmas Child. These children include those affected by war, poverty, natural disaster, famine, and disease.

Given the growing awareness of and concern about ageism in our world, I expect we’ll see changes in the way people think about, speak about, and portray older adults. Many people today seem especially aware of how prejudicial “-isms” keep individuals from flourishing and injure the common good. So, given the growing population of older adults and the widespread reality of ageism, I expect we’ll see increasing cultural momentum for fighting ageism.

But we don’t have to wait for the culture in order to promote positive views of older adulthood. Churches can and should be places where all people are respected as creatures made in God’s image, and where the gifts of all are valued, nurtured, and exercised. As this happens, folks in all seasons of life will begin to think more positively about the third third. And those of us who are in this time of life will see ourselves more truly and consistently as people who are defined, not by ageist bias, but rather by the biblical vision of human flourishing. When this happens, it’s likely that we will live longer and more fruitfully.

Liminal Space in our Senior Years Liminal space is the space in-between who we are and who we will be.
Can You Add a Day? (Part 1) Jesus asked a pointed question that, if taken literally, could help us understand how to…
Can You Add a Day? (Part 2) “Consider the Lilies.”
What are Your Good Works? Ephesians 2:10 teaches us to see our whole life as an interconnected series of good…