Longing for a True King

In those days a decree went out from Emperor Augustus that all the world should be registered.

As we look at our world today, filled with so much conflict, suffering, and injustice, we long for the coming of God’s kingdom. We ache for God’s justice and righteousness to prevail. The more we are close to those who are suffering, the more we will be drawn into the spirit of Advent.

Several years ago, my wife and I were blessed to visit Rome along with some good friends. For me, one of the highlights of that trip was our time in the Vatican Museum, which houses many of the most important archeological pieces relevant to New Testament scholarship, my academic field. I wanted to spend so much time looking at ancient statues, inscriptions, and pottery that, finally, the folks who were with me took off on their own. That was better for all concerned. 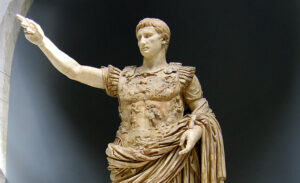 One of the artifacts I was most interested in seeing was a world-famous statue of Augustus Caesar. This imposing piece was almost seven feet tall (much taller than the actual man, who was probably around 5’ 7”). Gazing upon it, I could feel the majesty of Augustus. Though he did not claim divinity for himself during his lifetime, it was easy to see how this statue would have contributed to the post-mortem view that he was a god and the savior of the world. But even while he was alive, he was an imposing emperor, by far the most powerful person in the world. (I’ll share a photo I took of the top section of the Augustus statue.)

Augustus Caesar shows up in the nativity narrative of Luke. His presence there helps us to get into the spirit of Advent. Allow me to explain why.

By mentioning Augustus, Luke does more than place the birth of Jesus in a certain timeframe. He also establishes the historical and social context into which Jesus was born. Jews in the time of Jesus were not free people. They existed under the domineering authority of the Roman Empire, of which Augustus was the ruler. This authority wasn’t some distant or theoretical thing for the Jewish people. The Roman military pervaded their country. The Jewish authorities served under the dominant power of local Roman officials. And, perhaps most painful of all for ordinary Jews, they had to pay significant amounts of tax to Rome. That final blow is implicit in Luke 2:1. Augustus required the world to be registered for the purpose of taxation. He wanted to know who and where the people were so he could make sure they coughed up what they owed to Rome.

Thus, while we might read the opening verses of Luke 2 as interesting history or as ceremonial poetry for Christmas Eve worship services, the reality they convey is one of domination, oppression, and taxation. Those of us who live with considerable freedom have a hard time really understanding the Jewish longing for the Messiah, for freedom from Rome, for a nation ordered by God’s justice, for a kingdom ruled by the one true King.

We might complain, for example, about paying taxes. It’s no fun to work hard, only to give a substantial portion of our earnings to various levels of government. But suppose, for a moment, that our federal taxes didn’t go to our own government. Suppose that this money went to a foreign power that had conquered us. Suppose we knew our taxes supported the military presence and power of this government, something we hated on a regular basis. Suppose we remembered times when some of our citizens attempted to rebel against this foreign power, only to be foiled, captured, and brutally crucified. The Jewish historian Josephus reports that, at one time, the Roman army crucified over 2,000 Jews who had dared to stand up to Roman power (Antiquities 17.10). If you use your historical imagination to get into this Jewish reality, you can begin to understand the urgent longing of Jews for deliverance from God’s anointed ruler, the Messiah. You can feel, at least in part, how badly the people yearned for a true King.

As we look at our world today, filled with so much conflict, suffering, and injustice, we long for the coming of God’s kingdom. We ache for God’s justice and righteousness to prevail. The more we are close to those who are suffering, the more we will be drawn into the spirit of Advent.

As we look at our own lives today, we can see how much we ourselves need God’s kingdom. Our prayer, “Thy kingdom come, thy will be done,” isn’t just a piece of churchy liturgy. It’s an urgent plea for God to rule in our lives, today, putting things right, healing us and our relationships, and guiding us in the way of peace. The more we are honest with ourselves about how we are living, the more we will be drawn into the spirit of Advent, the more we will cry, “Come, Lord Jesus.”

As you think about it, how does the presence of Augustus in the Christmas story make a difference?

How would you describe your own longing for the coming of Christ and God’s kingdom?

Where do you need God’s grace in the seasons of Advent and Christmas?

Set aside some moments for quiet reflection. See if you can get clear on your own longing for Jesus.

Come, thou long expected Jesus,
born to set thy people free;
from our fears and sins release us,
let us find our rest in thee.
Israel’s strength and consolation,
hope of all the earth thou art;
dear desire of every nation,
joy of every longing heart.

Born thy people to deliver,
born a child and yet a King,
born to reign in us forever,
now thy gracious kingdom bring.
By thine own eternal spirit
rule in all our hearts alone;
by thine all sufficient merit,
raise us to thy glorious throne. Amen.

Find all Life for Leaders devotions here. Explore what the Bible has to say about work at the unique website of our partners, the High Calling archive, hosted by the Theology of Work Project. Reflection on today’s Life for Leaders theme can be found here: The Empire vs. the Kingdom

Prayers for Workers: Longing for God God is present in your place of work. You can meet God right there.
Longing for Fruitfulness in the Third Third of Life  A few weeks ago I was talking with a woman who had recently retired from…
Jesus is the King I want to reflect further on the opening verse of Mark. In yesterday’s Life for…
Prayers for Workers: Praise to the King of All the Earth God is the rightful King over all, including your work and workplace.