Now his elder son was in the field; and when he came and approached the house, he heard music and dancing. He called one of the slaves and asked what was going on. He replied, “Your brother has come, and your father has killed the fatted calf, because he has got him back safe and sound.” Then he became angry and refused to go in. His father came out and began to plead with him. But he answered his father, “Listen! For all these years I have been working like a slave for you, and I have never disobeyed your command; yet you have never given me even a young goat so that I might celebrate with my friends. But when this son of yours came back, who has devoured your property with prostitutes, you killed the fatted calf for him!” Then the father said to him, “Son, you are always with me, and all that is mine is yours. But we had to celebrate and rejoice, because this brother of yours was dead and has come to life; he was lost and has been found.”

Maybe as you come to this Refreshment Sunday you wonder if you will ever be refreshed. Be assured: the Father loves you. He searches for you as a shepherd does his sheep and a woman her coin. He welcomes you home as the father in the parable does the prodigal. He brings the dead to life.

Yesterday in our devotional journey I introduced you to the idea that this Sunday can be seen as a mid-Lent refreshment, a time to gather strength for the road ahead and rejoice in how God has worked with us so far.

Today, on Refreshment or Laetare Sunday, the Gospel passage assigned for us is the story of the Prodigal Son—which, despite the fact that many of you may know it almost by heart, was difficult for me to resist reproducing above in full. (I figure that even with very familiar stories we could probably all stand to read the text again and perhaps see something new.)

Jesus tells this parable as the culmination of a series of three parables responding to the Pharisees and scribes who criticize him for eating with tax collectors and sinners (Luke 15:1-2). First he talks about the shepherd who searches for and finds his one lost sheep though the 99 are safe (15:3-7), then the woman who searches for and finds her one lost coin though her other nine coins are safe (15:8-10). He tops off his sermon with the story of a lost son who is found again even though the father’s other son is safe. The son gets a bit more agency than the sheep and the coin, as he decides to come back on his own, but the father’s reaction of rejoicing (15:20-24, 32) exactly parallels that of the shepherd and the woman. (P.S. If you want a completely charming 10-second video of a happy rediscovered sheep, check out this Instagram post.) 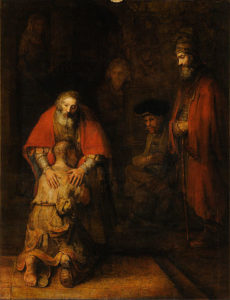 When I was in seminary, one of my professors introduced me to the beautiful Rembrandt painting called Return of the Prodigal Son. (Uli Chi wrote a devotional for De Pree a while ago inspired in part by this painting and by various parables of Jesus, and you can read it here.) This painting from the late 1660s—which beautifully shows the repentant attitude of the younger son, the caring embrace of the father, and the older son’s ambivalence—was the subject of a wonderful 1994 devotional book by Henri Nouwen, which my professor also recommended to me. It was not merely an academic recommendation; I was at a very dark and disheartening time in my life, and needed to be assured of the Heavenly Father’s love for me.

Maybe, just maybe, you are there too. War and pandemic and injustice have worn on all of us through what seems more and more to be a Lenten journey that stretches through years, not days or weeks or even months. Maybe as you come to this Refreshment Sunday you wonder if you will ever be refreshed.

Be assured: the Father loves you. He searches for you as a shepherd does his sheep and a woman her coin. He welcomes you home as the father in the parable does the prodigal. He brings the dead to life.

What is dead in you?

Where can you see God bringing what is dead to life?

I usually recommend a time of worship in song at this point—and I will in just a moment—but I would urge you today to also have the painting of the Prodigal Son before you as you worship. Contemplate it as you listen to the great 19th-century hymn “Come Ye Sinners, Poor and Needy,” also known as “I Will Arise and Go to Jesus.”

Lord, find me, embrace me, and refresh me. Amen.

Find all Life for Leaders devotions here. Explore what the Bible has to say about work at the unique website of our partners, the Theology of Work Project. Commentary on today’s Life for Leaders theme can be found here: The Shrewd Manager and the Prodigal Son (Luke 16:1-13; 15:11-32)

Have You Been Found? Christian faith is less a matter of finding God and more an experience of being…
Leadership Wisdom – Mourning and Restoring What Was Lost Those who mourn the great loss of humanity’s original potential are promised comfort of several…
If That Salt Has Lost its Savor, It Ain't Got Much in its… We are to be the peacemakers, the meek, the merciful, those who hunger and thirst…
The Lost Son Sometimes we feel as if we are lost; not physically lost, but lost emotionally, relationally,…