Episode 44: When You’ve Done the Work
But Aren’t Seeing Success

The “Making it Work” Podcast 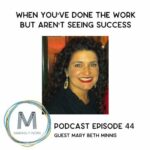 Personal frustration is part of the job description in most modern workplaces. Many people today find themselves toiling in jobs where the rewards of success often seem elusive. If this is you, this may leave you asking: How long do I have to wait to see success in my work? Our guest today is a film producer who recently found herself asking the question: How long? Mary Beth Minnis is a documentary filmmaker whose producing credits include award-winning films such as Return to Mogadishu, Unforgivable and Tower. Through these films, Mary Beth Minnis has inspired audiences with true stories of resilience, hope, and redemption. But the project most poised for commercial success, a documentary film called Jump Shot, continues to be plagued by setbacks and incomplete distribution, all of which have left her asking the question: How long? Interestingly enough, the film tells the story of the basketball great Kenny Sailors, the inventor of the jump shot, who also spent much of his career without recognition for his contributions. In today’s conversation we’ll talk to Mary Beth Minnis about what it’s like to wait, and wait, and wait for success at work, and to ask the question: How long?

Podcast Episode originally hosted HERE by the Theology of Work.

Not My Will But Yours Be Done As he prayed on the night before his crucifixion, Jesus asked his Heavenly Father to…
Episode 3: Defining Success For a Purposeful Life The "Making it Work" Podcast Featuring Nicholas Pearce Hosted by Leah Archibald and Mark Roberts It's…
Workplace Prayers: When You’ve Done Something Morally Wrong God will give you a clean heart.
Leadership Temptations: What Does Success Look Like? It’s easy to focus on spectacular progress and dramatic results.