Pilate then called together the chief priests, the leaders, and the people, and said to them, “You brought me this man as one who was perverting the people; and here I have examined him in your presence and have not found this man guilty of any of your charges against him. Neither has Herod, for he sent him back to us. Indeed, he has done nothing to deserve death. I will therefore have him flogged and release him.”

Then they all shouted out together, “Away with this fellow! Release Barabbas for us!” (This was a man who had been put in prison for an insurrection that had taken place in the city, and for murder.) Pilate, wanting to release Jesus, addressed them again; but they kept shouting, “Crucify, crucify him!” A third time he said to them, “Why, what evil has he done? I have found in him no ground for the sentence of death; I will therefore have him flogged and then release him.” But they kept urgently demanding with loud shouts that he should be crucified; and their voices prevailed. So Pilate gave his verdict that their demand should be granted. He released the man they asked for, the one who had been put in prison for insurrection and murder, and he handed Jesus over as they wished.

Historians debate who was directly responsible for Jesus’s death. However we answer this historical question, however, there is a more pressing question to be considered. From a spiritual point of view, who was responsible for the crucifixion of Jesus? Christians believe that, in a real sense, we bear such responsibility because of our sin. Even so, we must recognize that Jesus himself chose to die. He was not a powerless victim. He went to the cross out of obedience to his Heavenly Father and out love for the world . . . including you and me.

Biblical scholars and historians hold various views on the question of who was responsible for the death of Jesus. On first glance, our passage from Luke seems to make it clear that Pontius Pilate, the Roman prefect of Judea, did not want to kill Jesus and only did so because of pressure from Jewish leaders in Jerusalem. Pilate said, for example, “he has done nothing to deserve death” (Luke 23:15). He only gave in to the Jewish demands for crucifixion because they would be satisfied with nothing less. 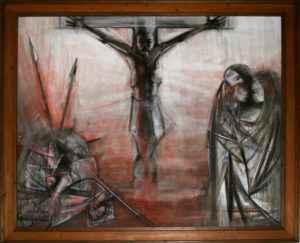 Painting of the crucifixion from Taormina, Sicily. © Mark D. Roberts. All rights reserved.

This is one possible reading of the Pontius Pilate story. But, after studying the Gospel narratives closely, I believe it’s not the best reading. Allow me to explain an alternative.

Pontius Pilate was known to be an arrogant, hard-hearted, tyrannical prefect, one who did many things to antagonize and terrorize the Jews under his governance. He was not one to be pushed around, especially by the Jews. Thus, if Pilate truly did not want Jesus to be crucified, it’s unlikely that he’d have given in to Jewish pressure. That would have been a blow to his pretentious pride.

Given the fact that Jesus had been stirring up the people, that he proclaimed the kingdom of God not Caesar, and that his popularity was growing (for example, see Luke 19:47-48 and 22:2), it’s likely that Pilate would have wanted to get Jesus out of the way somehow. But doing so during the Passover, when Jerusalem was overflowing with Jewish pilgrims, would have been extremely risky. If Pilate were perceived by the crowds as being responsible for Jesus’s death, then they might have revolted, which is the main thing Pilate wanted to avoid. But, if Pilate could manipulate things so that it appeared that the Jewish leaders were responsible for the death of Jesus – even though Pilate alone had the legal authority over crucifixion – then Pilate could kill two birds with one stone. He could kill Jesus, thus getting rid of a rabble-rouser. And he could enhance his own popularity while undermining the popularity of the Jewish leaders. So Pilate pretended not to want to crucify Jesus, believing that the Jewish authorities would insist on his death. Thus, they would appear to be responsible for Jesus’s death, even though, from a legal point of view, only Pilate could have sentenced him to crucifixion.

Pilate’s ploy worked, at least in many Christian interpretations of the passion narrative. This often fueled Christian anti-Semitism, something so contrary to the ministry and message of Jesus. Now, it’s important to note that the oldest and most universal of Christian creeds (Apostles Creed, Nicene Creed) both say that Christ was crucified under Pontius Pilate. Jews are not mentioned. But many Christians, nevertheless, put primary blame for the death of Jesus on the Jews, and used this as a rationale for prejudicial, hateful attitudes and behaviors. (If you’d like a more thorough explanation of the historical perspective I’m advocating here, check out my article: “The Death of Jesus: Why Was It Necessary?”)

Of course, it’s quite possible that my reading of this story is incorrect, though I’m not the only New Testament scholar to affirm it. But, in a way, it doesn’t really matter. Why? Because, for one thing, we know for sure that Pilate alone bore ultimate authority for sentencing Jesus to death, no matter what got him to that decision. That’s why our ancient creeds read as they do. Yet, even more importantly, we miss the main point if we focus only on the historical reasons for Jesus’s death. There is something more significant to be considered, something profoundly relevant to our faith and life today.

No matter how we explain the historical reasons for Jesus’s crucifixion, Christians understand that we are profoundly responsible for his death from a spiritual point of view. Jesus died in order to take upon himself the penalty for human sin, including your sin and my sin. There is a very real sense in which I am responsible for Jesus’s death . . . and so are you.

But, perhaps even more importantly, Jesus actually chose to die in fulfillment of his Father’s will. Jesus didn’t kill himself, of course. But he freely chose the way of suffering, the way of the cross, the way of death. He did so out of obedience to the Father and love for us. We saw this as Jesus prayed in the Garden of Gethsemane (Luke 22:39-46). And we see it clearly in the Gospel of John, “For this reason the Father loves me, because I lay down my life in order to take it up again. No one takes it from me, but I lay it down of my own accord. I have power to lay it down, and I have power to take it up again. I have received this command from my Father” (John 10:17-18). Clearly, Jesus claimed ultimate responsibility for his death.

During Holy Week, the last week of Lent, you have an opportunity to focus on the death of Jesus; not just what happened in history, but also why it happened and what difference this makes today. The historical reasons matter, of course. But so much more do the spiritual reasons. Jesus chose to die as an expression of God’s love for the world, including you. So, as you acknowledge your responsibility for the death of Jesus, don’t miss the gospel truth. Jesus chose to die for you out of love to set you free from sin and death. That is indeed good news.

Do you think of yourself as in any way responsible for the death of Jesus? If so, why? If not, why not?

Given what Jesus said in John 10:17-18, how comfortable are you with saying that Jesus was, in some profound way, responsible for his death?

Do you feel God’s love for you as you reflect on the cross of Jesus?

Reserve a few minutes today to reflect quietly on the death of Jesus. See what the Lord wants to press upon your heart.

But you were not driven to the cross against your will. You were not a helpless victim. You chose the cross in obedience to your Father’s will and out of love for the world. Nobody took your life from you apart from your decision to offer it. O Lord, how amazing is your love!

As I reflect on your death during this Holy Week, may I come to a truer understanding and a deeper experience of your love and grace. Amen.

Holy WeekStations of the Cross