The God of Elijah

Then Elijah took his mantle and rolled it up and struck the water; the water was parted to the one side and to the other, and the two of them crossed on dry ground.

When they had crossed, Elijah said to Elisha, “Tell me what I may do for you, before I am taken from you.” Elisha said, “Please let me inherit a double share of your spirit.” He responded, “You have asked a hard thing; yet, if you see me as I am being taken from you, it will be granted you; if not, it will not.” As they continued walking and talking, a chariot of fire and horses of fire separated the two of them, and Elijah ascended in a whirlwind into heaven. Elisha kept watching and crying out, “Father, father! The chariots of Israel and its horsemen!” But when he could no longer see him, he grasped his own clothes and tore them in two pieces.

Where is the Lord, the God of Elijah? He is still here, and we can still follow him.

After the contemplative walk of Lent, the drama and anguish of Holy Week, the amazement of Easter Day, the growing promise of the Easter season, and the explosiveness of Pentecost, we are back to Ordinary Time—the season of the church year when we journey slowly through the Scriptures and think about how to live out the dramatic and powerful lessons from the Lent-Easter cycle of Sundays in our daily lives. (I posted a longer explanation of Ordinary Time last year, here.) 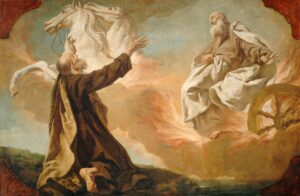 The story of Elijah has been one of my favorite Old Testament stories ever since I was introduced to it in my teens through Felix Mendelsohn’s famous oratorio Elijah. Elijah was one of the most famous of Israel’s prophets—many people thought John the Baptist might be Elijah returned, though he reassured them that he was not (John 1:19-28).

Last week the lectionary readings told the story of Elijah’s conflict with Ahab and Jezebel, the unfaithful king and queen of Israel during Elijah’s time of prophetic activity. Today’s passage is the end of Elijah’s story—though not that of his disciple Elisha, who sees his mentor and friend taken to heaven in a fiery chariot. Elijah is one of the very few people in the Bible—Enoch (Genesis 5:21-24) is another—simply taken away by God without ever dying and being buried.

As Elijah and Elisha journey together to Bethel on what both are aware will be their last journey together, Elisha asks to receive the prophetic spirit that has animated his friend. Elijah reminds him that this will be a “hard thing”—but if Elisha sees Elijah as he is taken, then this hard thing will be granted. And it is; after Elijah’s dramatic departure, as he makes his way back alone, Elisha is able to part the water just as Elijah did on the way. Yet he does it not in his own strength, but by using Elijah’s mantle and calling on Elijah’s God.

I love this passage more and more as I grow older and closer to what Mark Roberts likes to call the “third third” of my life. I empathize with the sad, nostalgic feeling of Elijah and Elisha’s journey to Bethel, a feeling even more pronounced if you read the beginning of the story in 2 Kings 2:1-7.

I realize that so many of the saints that I looked up to in my teens and 20s and 30s are with Jesus now and have crossed the Jordan. It is up to me to minister in their spirit, taking on their mantle, and in dependence on the God they served. Where is the Lord, the God of Elijah? He is still here, and we can still follow him.

Where have you been Elisha, following a mentor?

Where have you been Elijah, leading disciples into greater knowledge of the Lord?

Where is the Lord, the God of Elijah and Elisha, working in your life?

Since I mentioned Elijah, we should hear an excerpt, right? Here is one of my favorite choruses performing “Then did Elijah the prophet break forth,” based on 2 Kings 2 and also on Elijah’s story in the apocryphal book of Ecclesiasticus. (It’s from a performance of the entire second half of the oratorio, so you can listen right on to the end if you want!) Imagine what Elisha felt as you listen and pray.

God of Elijah and Elisha, of all the saints of my own past, help me follow you. Amen.

Find all Life for Leaders devotions here. Explore what the Bible has to say about work at the unique website of our partners, the High Calling archive, hosted by the Theology of Work Project. Reflection on today’s Life for Leaders theme can be found here: Can You Say Who’s Calling?