The Saturday After Tuesday

Wisdom cries out in the street;
in the squares she raises her voice.

It is worth thinking about all the times Jesus has called us to take up our cross, and we have found that Christian discipleship demands too much of us when it becomes distinctive from all the other things that claim our attention.

Twenty years ago today, I was a graduate student in a doctoral program. I worked in the divinity school library at the circulation desk. If it was quiet, I was allowed to work on my own assignments and other things I needed to do. I was in the ordination process in the United Methodist Church at the time, and I had been asked to preach at my local church on Sunday, September 16, 2001, while my mentoring pastor was on vacation. 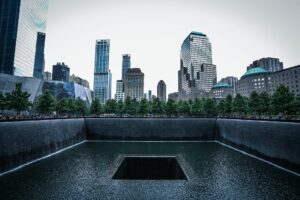 The 9/11 memorial pool with the NYC landscape behind it

On the morning of Tuesday, September 11, 2001, I was working on picking hymns to go with my sermon. I’ve saved my email all these years, and so I know that on August 29, 2001, I had told my mentoring pastor that I was going to preach on “what makes Christian discipleship distinctive (as opposed to all the other things that claim our attention).”

As the world was changing before our eyes and in our ears and our hearts, I was picking hymns for the service. Remember—we had no smartphones then, and every possible news site on the circulation desktop was crashing. My boss advised us just to go on with our work and not talk about what was happening. People were passing whispered rumors to me, many of which later turned out to be inaccurate. About an hour after the North Tower of the World Trade Center collapsed, I was still picking hymns: “O, For A Thousand Tongues to Sing,” “Seek Ye First the Kingdom of God,” “Turn Your Eyes Upon Jesus,” and a hymn that would have been new to the congregation: “Rise, Shine, You People” with words by Ronald Klug, which begins:

Rise, shine, you people! Christ the Lord has entered
our human story; God in him is centered.
He comes to us, by death and sin surrounded,
with grace unbounded.

We never sang those hymns, of course. I never preached that sermon. My pastor canceled her vacation (planes were grounded anyway) so that she could preach and lead the congregation in mourning and lament.

The following spring, a book was released called The Sunday After Tuesday, which collected sermons preached on college and university campuses on September 16, 2001. Looking at it, I thought back to the brief moments on that shocking Tuesday morning when I faced the thought of saying something, anything, on my own particular Sunday after Tuesday. I have often thought about that in the intervening years.

When I knew I would be writing this reflection for the 20th anniversary of 9/11, I turned to the week’s lectionary passages. I’m committed to believing that something can always be found in the assigned passages for the week that will speak to a congregation’s, or a reader’s, soul. I was hoping for comfort and solace. What I got instead was rigor and admonition.

The assigned Old Testament passage, which I’ve excerpted a verse of above, is a passage in Proverbs where Wisdom stands on the street corner and admonishes those who have not listened to her and who have not followed the Lord that they are “fools” and “scoffers”—that she will not listen to them or save them “when panic strikes you like a storm, and your calamity comes like a whirlwind, when distress and anguish come upon you” (Proverbs 1:27). (Reading Proverbs 1 in the context of 9/11 keeps hauntingly reminding me of the song about 9/11 by the great Canadian songwriter Leonard Cohen that contains the line “I’ll be standing on this corner / Where there used to be a street.”)

The Epistle passage from James is the famous description of what devastation the tongue can inflict by speaking evil (James 3:1-12). And the Gospel passage from Mark, which I’ll discuss tomorrow, admonishes us to take up our cross. Well then, as my Gen Z daughter says. Is there no balm in Gilead?

I think there is comfort to be found among the admonitions. But I also think, twenty years on, that it is worth sitting with the admonitions. It is worth remembering that we live in a world where we are “by death and sin surrounded,” where Wisdom speaks and we do not always listen, where the Lord calls and we do not always follow. It is worth remembering that we do not always govern our tongue; “with it we bless the Lord and Father, and with it we curse those who are made in the likeness of God” (James 3:9), and some of the fires our tongues have set (James 3:5) have burned all the way around the world.

It is worth thinking about all the times Jesus has called us to take up our cross, and we have found, in the words of that sermon I never preached, that Christian discipleship demands too much of us when it becomes distinctive from all the other things that claim our attention.

Would I have said all of that on the Sunday after Tuesday? I do not know. For today and tonight at least, sit with your anger and your grief and your fears and your failures and your arguments and your debates and your memories. I’ll be back, and have more to say, tomorrow. And more importantly, Jesus will too.

One question only: what is Jesus trying to say to you today?

Today: no music. Watch this for a while, pray, and lament.

Lord, come to us when we are by death and sin surrounded—come with grace unbounded. Amen.

The Sunday After Saturday Taking up our cross, losing our life to save it—these are not fruitless endeavors.
Giving Tuesday In November, I traveled to four different cities to meet with folks across industries who…
Prayers for Workers: Rejoicing After a Difficult Season When God delivers us from difficult times, our hearts rejoice. We can’t keep back our…
A Devotion for the Day After the Election On the day after the election in the United States, we need to hear once…

One thought on “The Saturday After Tuesday”