You Can Make a Difference that Matters

He looked up and saw rich people putting their gifts into the treasury; he also saw a poor widow put in two small copper coins. He said, “Truly I tell you, this poor widow has put in more than all of them; for all of them have contributed out of their abundance, but she out of her poverty has put in all she had to live on.”

Sometimes we can devalue ourselves and our contributions to the world. “I’m only a teacher,” we say, or “I’m only a mother” or “I’m only a small business owner.” But Jesus doesn’t think in terms of “only.” What impresses Jesus is your willingness to give all that you are to God. You can make a difference that matters to God when you offer your whole life to the work of God’s kingdom.

I have written this devotion for March 4, 2021, though it will first be posted on March 3. In a moment you’ll see why that date matters.

Our passage from Luke focuses on the actions of a “poor widow” whose gift to the temple, though small in monetary value, turns out to be great in the eyes of Jesus. 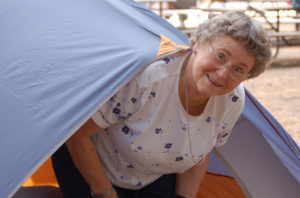 One of my favorite photos of my mom. She was camping with a bunch of families from her church. Photo copyright of Mark Roberts.

As I reflect on this story, I can’t help but think of my mother. It’s not that she was a poor widow, though she did live as a single woman for thirty years after my father died. My mom comes to mind for two reasons. First, today (March 4, 2021) would be her 87th birthday. I won’t be able to celebrate with her, however, because she died over four years ago. The second reason I’m thinking about my mom is that, like many of us, she tended to undervalue the difference she could make in this world. She’d compare herself to people who had more resources, talents, or education and, I fear, think that she wasn’t as valuable as they were.

This is part of my family’s emotional DNA, which I won’t delve into here. But let me say simply that I can relate to how my mom thought about herself. Perhaps you can too. I have known many people throughout my life who depreciate the difference they make because it isn’t big enough. Folks in my church would think that their financial contribution wasn’t important because it was modest in size. Or they’d refer to themselves as “only a teacher” or “only a mom” or “only a small business owner.”

Jesus didn’t think in terms of “only.” We see this in today’s passage from Luke. He watched as wealthy people put gifts into the temple treasury. Presumably some were financially substantial. Then, he “saw a poor widow put in two small copper coins” (Luke 21:2). Though the monetary value of her gift was small, Jesus said, “Truly I tell you, this poor widow has put in more than all of them; for all of them have contributed out of their abundance, but she out of her poverty has put in all she had to live on” (21:3-4). Jesus didn’t see the widow as giving “only” a tiny gift. He didn’t see her as “only” a poor widow with no hope of making a difference that mattered. Rather, in terms of the values of the kingdom of God, the fact that she gave sacrificially meant that, from Jesus’s point of view, the widow gave more than all of the wealthy people.

Notice that Jesus did not denigrate the generosity of the wealthy. It’s not that they did anything wrong by giving to the temple. His point was to lift up the value of the widow’s gift, acknowledging her sacrifice, honoring her commitment. She became an example of what living under God’s reign was really all about. It involves giving to God, not just something on the side, something extra, but rather your whole life, your whole self.

I think my mom came to value herself and the difference she made in the last month of her life. In the fall of 2016 she was diagnosed with cancer that was progressing rapidly. The word of her condition spread throughout her church. Soon my mom received dozens of cards from people who expressed their gratitude for her influence on their lives. Finally, she seemed to take these communications to heart in a way she had not before.

Why did she get so many cards? Because my mom, as a widow, had been generous with all that she had. Soon after my dad died, my mom’s church was looking for a director for their expansive children’s ministry. When they couldn’t find a suitable person, they asked my mom to serve as the interim director for a few months. In typical fashion, my mom almost didn’t do it because she feared she would not do a good job. She knew she lacked formal education and professional experience. But her commitment to the church and its children overrode her fears, so she took the job. In a very few months, the children’s ministry was flourishing in a way that it had not for years. So the church made her the full-time children’s director, a role in which she served for seventeen years. During that long season she influenced hundreds of children and families, helping them to know and grow in the Lord. But I’m not sure my mom really understood the difference she made until she received all of those cards from grateful children, now grown, and their parents.

From the point of view of Jesus, the greatness of my mom’s work wasn’t the fact that she influenced so many people. Rather, it was the fact that she gave all she had. She offered her whole self to the Lord, serving the people entrusted to her care faithfully and sacrificially. She worked hard during most days of the week and often stayed up late developing curriculum, inventing programs, and expressing personal care through letters and emails.

You may have considerable wealth. Or you may have limited financial resources. You may be extremely talented in ways that earn the praise of many. Or you may never do anything that earns the limelight. But what you have available to offer, whether big or small, doesn’t impress the Lord. What does get his attention is your willingness to give freely and generously, offering all that you have and all that you are in service to others in his name. No matter who you are or what you have, you can make a difference that matters . . . to God and his work in this world.

May this season of Lent be a time for you to examine your offering to the Lord, letting the poor widow in Luke be your teacher and inspiration.

Do you ever discount your contribution to God’s work in the world? If so, why do you do this? If not, why not?

Can you think of a time when you gave your whole self to the Lord and his work? (Remember that God’s word isn’t just church work. It can include the work you do during the week if it is offered to God as worship.)

Have you known someone like my mom, a person with limited resources who gave all she had to the people entrusted to her care? If so, how has this person inspired you?

Do something today in service to someone else. It doesn’t have to be big. It might be a simple phone call, email, or text. Give of yourself in a way you might not have done if you had not read this devotion.

Lord Jesus, I’m struck today by how easy it would have been for me to be impressed by the generosity of those who gave large sums to the temple. You did not put down their giving. But you did challenge us to think differently about what really matters. It wasn’t the size of the gift, but the sacrifice involved. You held up the woman as an example of someone who gave her all. She exemplifies what you expect of us.

Thank you, Lord, for honoring small gifts given with great love. Thank you for receiving gladly my gifts to you. Amen.

One thought on “You Can Make a Difference that Matters”