But wanting to justify himself, he asked Jesus, “And who is my neighbor?” Jesus replied, “A man was going down from Jerusalem to Jericho, and fell into the hands of robbers, who stripped him, beat him, and went away, leaving him half dead. Now by chance a priest was going down that road; and when he saw him, he passed by on the other side. So likewise a Levite, when he came to the place and saw him, passed by on the other side. But a Samaritan while traveling came near him; and when he saw him, he was moved with pity. He went to him and bandaged his wounds, having poured oil and wine on them. Then he put him on his own animal, brought him to an inn, and took care of him. The next day he took out two denarii, gave them to the innkeeper, and said, ‘Take care of him; and when I come back, I will repay you whatever more you spend.’ Which of these three, do you think, was a neighbor to the man who fell into the hands of the robbers?” He said, “The one who showed him mercy.” Jesus said to him, “Go and do likewise.”

We are saved by the limitless grace of Christ on the cross, the source of all mercy. But that does not mean that our works don’t matter, don’t make a difference, and don’t help share the love and grace and mercy of Christ with those in need.

Other than the stories of Jesus’s birth, death, and resurrection, I’d wager a guess that the Parable of the Good Samaritan is one of the most famous stories in the Gospels, and probably Jesus’s most famous parable. If you were raised in the church, you probably heard it very early in your life. I think it may have been the first parable I ever learned about in Sunday School. 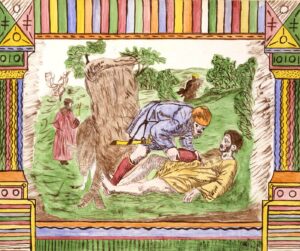 Preachers and commentators and devotional writers have pointed out many excellent things about this passage for years. For one thing, Jesus affirms here—as he does in multiple other places in the Gospels—the heart of Jewish worship and practice. He sends the lawyer who wants to test him to the Jewish law itself, and affirms the lawyer’s answer directly from Torah that to inherit eternal life involves “lov[ing] the Lord your God with all your heart and with all your soul and with all your strength and with all your mind and your neighbor as yourself.” This echoes Deuteronomy 6:4-7, the beginning of which is known as the Shema, which has been recited in Jewish worship for millennia.

There is also the fact—frequently mentioned in sermons and devotions—that it is an outsider, a Samaritan, who shows mercy to the robbed, beaten, and abandoned traveler. Samaritans claimed to be descended from northern Israelites not exiled by the Assyrians and to have preserved the ancient faith given to Moses better than the Israelites had. Their holy place was on Mount Gerizim and not in Jerusalem. There was bitter rivalry between them and the Jewish people. Hearers would have expected the priest or the Levite to be the hero of the story, but instead, mercy came from the most unexpected place and person.

While affirming both these points, I have to say that what strikes me the most about the passage as I read it this time is how well it complements our study of Amos yesterday. The lawyer knows what the law says he should do. The priest and the Levite in the parable were well-educated about what their faith required. But the lawyer tried to wiggle out of his obligation based on the definition of “neighbor,” and the priest and the Levite prioritized their outward responsibilities. The person praised in the story is the one who actually performed works of mercy and justice.

As a Protestant myself, I know very well that many Protestants shy away from passages such as Amos 5 and 7 and Luke 10—passages that imply that what really matters about our faith is not what we believe, but what we do. Our salvation cannot be based on works, we insist. And indeed it is not— we are saved by the limitless grace of Christ on the cross, the source of all mercy. But that does not mean that our works don’t matter, don’t make a difference, and don’t help share the love and grace and mercy of Christ with those in need.

At the end of the story, the lawyer appears to have learned his lesson. At the least, he has learned that it’s not possible to shirk the obligations of being a neighbor. Go and show mercy, Jesus reminds him. Walk the talk. Jesus wants us to remember that too.

Where and how has mercy been shown to you?

Where and how can you show mercy to others?

In my tradition, the hymn “Jesu, Jesu” (lyrics on screen) is often sung on Maundy Thursday because of its reference to foot washing, but it actually asks a broader, and important, question relevant to this parable: Jesus, how do we serve our neighbors? (The hymn’s history as a collaboration between two cultures, found here, is worth reading.) Let it help you as you ponder the question of how to be a neighbor.

Lord, help me show your mercy to a hurting world. Amen.

Find all Life for Leaders devotions here. Explore what the Bible has to say about work at the unique website of our partners, the Theology of Work Project. Commentary on today’s Life for Leaders theme can be found here: The Good Samaritan at Work—Loving Your Neighbor as Yourself (Luke 10:25-37)