“See, I am setting a plumb line
+++in the midst of my people Israel;
+++I will never again pass them by;
the high places of Isaac shall be made desolate,
+++and the sanctuaries of Israel shall be laid waste,
+++and I will rise against the house of Jeroboam with the sword.”

Going on a journey through Ordinary Time through a semi-continuous reading of the Old Testament means, this year, that we experience generous helpings of the prophetic books. This can is often startling, and not always terribly devotionally-feeling. Sometimes Biblical prophecies are comforting, to be sure. But frequently they are not. Today’s reading from Amos is no exception. 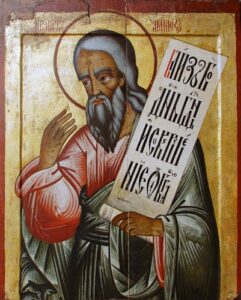 An 18th-century Russian icon of the prophet Amos. Iconostasis of Kizhi Monastery, Russia

Who was Amos? All we know about him is what we can find in his prophecies. He was not a professional prophet; at the beginning of the book, he identifies himself as a shepherd (Amos 1:1) and he later defends himself to the priest of Bethel as “a herdsman and a dresser of sycamore trees. . .the Lord took me from following the flock, and the Lord said to me, ‘Go, prophesy to my people Israel’” (Amos 7:14-15).

Amos came from Judah (the southern kingdom in the division that had arisen after David and Solomon’s time), but he mainly preached against Israel (the northern kingdom) and its wealthy, evil king Jeroboam II. Thus we know that he was active between 765 and 760 BC. He prophesied the fall of the northern kingdom in passages such as the one above, and spoke passionately of God’s justice and God’s power. Perhaps the most famous passage from the book of Amos is 5:21-24. It was Amos 5:24 that Martin Luther King referred to at the end of his 1963 “I Have a Dream” speech (you can listen to a clip from that speech here):

I hate, I despise your festivals,
+++and I take no delight in your solemn assemblies.
Even though you offer me your burnt offerings and grain offerings,
+++I will not accept them,
and the offerings of well-being of your fatted animals
+++I will not look upon.
Take away from me the noise of your songs;
+++I will not listen to the melody of your harps.
But let justice roll down like water
+++and righteousness like an ever-flowing stream.

It was because Jeroboam and his government and his cronies had failed to do justice that Amos, speaking for the Lord of justice, said that they would ultimately fall. Even though Israel’s rulers had kept the outward forms of faith, they had not seen to it that the least among them were well treated. So, God said through Amos, they would be measured (a “plumb line” is a carpenter’s tool that checks that everything is centered and lined up with gravity) and when they were found wanting, they would be destroyed. As I said—not exactly a cheerful devotional thought.

In studying this passage, though, we can see God holding up a plumb line to us as well. No, most of us are not wealthy kings and government officials who systematically oppress the poor. But, in the small ways in which God has given us to lead, have we been just? Have we been kind? Have we been generous? Have we been righteous? Have we assumed that getting all the words right in church is enough (as an Episcopalian, that’s a particular ouch for me) or have we been faithful to live out those words in our daily lives?

For, after all, the Lord’s justice will ultimately roll down like water. We cannot impede that stream no matter how much we try. We can either cooperate—or drown.

Ponder the questions in the next-to-last paragraph above.

At the same March on Washington where MLK Jr. delivered the “I Have a Dream” speech, Joan Baez memorably sang the gospel song “We Shall Overcome” that had become associated with the Civil Rights movement. (You can read the history of this song here.) I found two versions of this: one of part of the song as performed at the March itself, and one of Baez singing the whole song in concert in front of a London audience. While different, they are both beautiful and moving. Listen, pray, and hear the cry of Amos in the words.

Lord, may your justice flow down. Amen.

Find all Life for Leaders devotions here. Explore what the Bible has to say about work at the unique website of our partners, the Theology of Work Project. Commentary on today’s Life for Leaders theme can be found here: Apathy Due to Wealth (Amos 3:9-15, 6:1-7)

What’s Jesus’s Line? In the season of Lent we have the opportunity to ask in a fresh way,…