Calling in the Third Third of Life: The Beginning

Now the LORD said to Abram, “Go from your country and your kindred and your father’s house to the land that I will show you. I will make of you a great nation, and I will bless you, and make your name great, so that you will be a blessing. I will bless those who bless you, and the one who curses you I will curse; and in you all the families of the earth shall be blessed.” 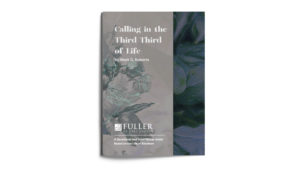 Cover of “Calling in the Third Third of Life.” This devotion is the first of ten in this devotional and small group guide.

The last verses of Genesis 11 introduced Abram and his wife, Sarai. Later in Genesis, they will be called by their more familiar names, Abraham and Sarah. For now, we’ll stick with the names we find in the text. At first, we don’t know much about them, other than Abram’s family tree, Sarai’s childlessness, and the fact that Abram’s father, Terah, took his family from their homeland, intending to move to the land of Canaan. But they didn’t complete the trip. They settled in Haran where Terah died, leaving Abram, Sarai, and the rest of Terah’s family.

Genesis 12 begins on a startling note. Without advance notice, the Lord said to Abram, “Go from your country and your kindred and your father’s house to the land that I will show you” (12:1). Then the Lord outlined the considerable blessings he planned to shower upon Abram after he went: “I will make of you a great nation, and I will bless you, and make your name great, so that you will be a blessing. I will bless those who bless you, and the one who curses you I will curse; and in you all the families of the earth shall be blessed” (12:2-3).

Theologians describe what happened to Abram in Genesis 12:1-3 as his call or calling. In a literal sense, God called Abram, speaking to him audibly, telling him what he had to do. But when we use the language of calling in reference to Abram, we’re also suggesting that God gave him something special to do, something distinctive to live for, some new purpose in life. No longer did Abram have simply an occupation. Now he had a calling or vocation. (The word “vocation” comes from the Latin verb vocare, which means “to call.” Thus “vocation” and “calling” have nearly the same meaning. I’m using “calling” here because “vocation” in English is strongly associated with a particular job or career. Calling is a broader concept. As we’ll see later, it may be helpful to think in terms of callings, plural, in addition to calling, singular.)

Though Abram had lived 75 years before God called him (12:4), his life went in a new and unexpected direction because of his calling. He did and experienced things he never would have imagined before. The Lord blessed him and used him in extraordinary ways, not only for Abram’s benefit but also for the benefit of all humanity.

In the devotions that follow this one, I’d like to explore with you the nature of calling, Abram’s calling, to be sure, but also your calling. In this devotion, I want to underscore something that we might easily ignore because it’s so obvious. Here it is: It all begins with calling. Abram’s transformation from herdsman to world-changer began with his calling, with God speaking to him. Abram’s new life didn’t start with his dreams or desires, though they were stirred up by his calling. Abram didn’t look inside of himself to discover his passion so he could act on it, though his calling surely engaged his passion. Rather, he heard God’s call and, as we’ll see, responded to it.

I want to suggest that what was true of Abram can also be true for us. Though our dreams, desires, and passions do matter, and though God can surely use them for his purposes, our lives and our work are meant to be a response to God’s calling. Without ignoring our own hearts, through our calling we get in touch with the heart of God. We identify if you will, with God’s dreams, desires, and passions. We align our lives with God’s mission and purpose for the world . . . and for ourselves.

Calling isn’t something we figure out when we’re young and that’s the end of it. We often associate calling with what people in early adulthood try to identify before they start their careers. Of course, in today’s world, the whole notion of a singular, lifelong career in response to a singular, lifelong calling is increasingly obsolete. For millions, the notion of calling isn’t even relevant. But, if we’re going to live lives that matter, we need to hold on tight to the idea of calling. Moreover, we need to be open to hearing God’s calling in every season of life, including the third third. Just because you qualify for a senior discount at Denny’s, that doesn’t mean you can forget about calling. No matter our age, no matter our life condition, like Abram and Sarai, we need to guide our lives by the calling we have from God.

When you hear the word “calling,” what comes to mind?

Similarly, what do you think and feel when you hear the word “vocation”?

Would you say you have a sense of calling in your life? If so, what is it? Where did you get it? If not, how do you think and feel about this?

As I reflect on Genesis 12, part of me thinks it would be wonderful to hear you call me in the way you once called Abram. I wish I could audibly hear your voice. But, honestly, there is another part of me that is terrified. What if you told me to leave my country, home, and family? What would I do? Do I really want to hear your call on my life?

Help me, I pray, to be open to you. Help me to hear what you have to say to me. Help me to be ready and willing to obey you no matter what. Even in this third third season of my life, may your calling be the foundation of my life and work. To you be all the glory. Amen. 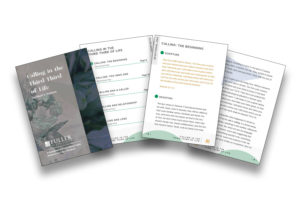 If you’d like to read to other nine devotions in Calling in the Third Third of Life, check out this item in the De Pree Center store.