Now a new king arose over Egypt, who did not know Joseph. . . Now a man from the house of Levi went and married a Levite woman. The woman conceived and bore a son; and when she saw that he was a fine baby, she hid him three months. When she could hide him no longer she got a papyrus basket for him, and plastered it with bitumen and pitch; she put the child in it and placed it among the reeds on the bank of the river. His sister stood at a distance, to see what would happen to him.

Moses’ story takes up the whole book of Exodus and beyond, but you can read the beginning and context for this Scripture in Exodus 1-2.

The Exodus story forms the way so many of us tell of our own journey from enslavement to sin through a wilderness of struggle to the Promised Land of a relationship with Christ. But I have been convicted of the fact that, in our national story, as a white person, I am Pharaoh. Will I harden my heart or let Christ soften it?

In my last set of devotions, I told the story of Joseph and how the Israelites came to Egypt. With today’s passage, we begin what the great radio broadcaster Paul Harvey used to call “the rest of the story”—how they left Egypt and returned once again to the land that Abraham and Sarah, Isaac and Rebekah, and Jacob, Leah, and Rachel had made their home.

The Israelites lived in Egypt for a while—the Bible says it was 430 years (Exodus 12:14). During that time, their status as a once-honored minority, relatives of Pharaoh’s right-hand man, declined. Exodus 1:8 says that a new Pharaoh who did not “know Joseph” came to power. After centuries, it was not Joseph himself he would not have known, of course, but now even the story of what Joseph had done for Egypt was forgotten. The Israelites were enslaved by Egyptians who did not remember the old stories. And in that moment, God raised up another champion who helped them break free: Moses.

It’s difficult to underestimate the power that the story of Moses and the Exodus has held for Christians down through the ages. The baby left in a basket of bulrushes—the burning bush—the parting of the Red Sea—the Ten Commandments—these are stories that, if we grew up in the church at all, are as familiar to us as breathing. And even if we did not, they’ve permeated our culture as well, through movies such as “The Ten Commandments” and “Prince of Egypt.” They form the way so many of us tell of our own journey from enslavement to sin through a wilderness of struggle to the Promised Land of a relationship with Christ.

One of the major ways these stories have become part of the national story of the United States is through the long fight for freedom of enslaved Black people in America. (You can read more about that in Herbert Marbury’s Pillar of Cloud and Fire). Harriet Tubman, for example, was called “Moses” because she guided enslaved people to freedom along the Underground Railroad. Spirituals such as “Go Down, Moses” and “Swing Low, Sweet Chariot” were used not only to remember stories from Scripture in the past and to hope for future deliverance, but to send messages about deliverance in the here and now from the horrors of slavery.

Later, in the Civil Rights movement, Martin Luther King, Jr. used the motif of Exodus in many of his speeches and sermons. One, “The Death of Evil Upon the Seashore,” haunts me:

Many years ago the Negro was thrown into the Egypt of segregation, and his great struggle has been to free himself from the crippling restrictions and paralyzing effects of this vicious system. For years it looked like he would never get out of this Egypt. The closed Red Sea always stood before him with discouraging dimensions. There were always those Pharaohs with hardened hearts, who, despite the cries of many a Moses, refused to let these people go. But one day, through a world shaking decree by the nine justices of the Supreme Court of America and an awakened moral conscience of many White persons of good will, backed up by the Providence of God, the Red Sea was opened, and the forces of justice marched through to the other side.

It haunts me because the more I reflect on how the Exodus story has been applied to the Black experience, the more something becomes clear to me: In this story, as a White person living in the U.S., I am Pharaoh. And I can choose whether to let God work on my heart and soften it, or to harden my heart against the way God is calling me in this day, in this moment, to hear that cry of the spiritual which commissions Moses to speak to me: “Go down, Moses, way down in Egypt land, and tell old Pharaoh—Let my people go.”

How do you respond to the story of Moses?

How has this story helped you on your own spiritual journey?

How do you react to the way the story has become part of our national story for those of us who live in the United States?

Listen to a recording of “Go Down, Moses” (perhaps this one) and ponder its meaning in your own life.

Lord Jesus, you are the only Lord of our lives. You always call us from oppression to freedom, and you are always with us on the journey. Teach us how to work for freedom for all people, everywhere, and be with us all the way from Egypt’s land to Canaan. Amen. 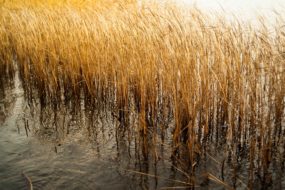 Miriam and Moses Every superhero and super-shero has an origin story. An origin story often includes a flashback…