I know what you might be thinking: “Mark, I can’t believe you’ve stooped this low! You’re reviewing a book about how to live forever?! Have you fallen prey to the cultural obsession with extending life indefinitely? Is your third third initiative stooping so low?”

Well, I certainly hope not! Please allow me to explain. 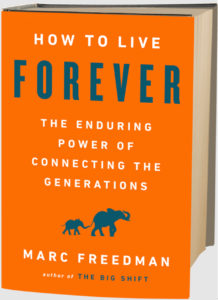 I might have had similar worries about a book called How to Live Forever, except this book was given to me by a friend, Eunice Lin Nichols, someone whose wisdom and judgment I deeply trust. Plus, I was familiar with the author, Marc Freedman, and knew that was anything but a scam artist with some newfangled longevity scheme.

Freedman does believe in what he calls the fountain of youth. But it’s not what you might suppose. He explains, “The real fountain of youth is in the same place it’s always been. It’s the fountain with youth. The only true way to endure is to accept our mortality and with it the wisdom that we are a species designed to live on . . . just not literally. We do so by passing on, from generation to generation, what we’ve learned from life. By investing in and connecting with the next generation, not actually trying to be that generation” (p. 21). We live forever, according to Freedman, not by adding endless years to our lives, but rather by investing younger people, in those who will outlive us.

I learned a lot from How to Live Forever about what he calls “age apartheid.” This is the separation of old and young, something that was once unheard of but has now become the norm in many segments of our culture. This kind of separation is found especially in retirement communities where older adults live without the regular presence of younger people, especially children. I was fascinated by Freedman’s telling of the story of how such retirement communities began in the U.S., ironically enough in a city called Youngtown.

Freedman’s historical and cultural insights alone in How to Live Forever would make the book worth reading. But what I loved about this book were the stories. This book is filled with fascinating, instructive, and moving stories about third third folk who are living forever by investing in the lives of younger people. One of my favorites features the relationship between legendary jazz trumpeter Clark Terry and a young, blind piano prodigy, Justin Kauflin. Freedman’s telling of their relationship is inspiring, but I was especially intrigued by his reference to a documentary about Terry and Kauflin, the 2014 film Keep on Keepin’ On. It turns out that you can watch this amazing film via Amazon Prime. It has a 98% Rotten Tomatoes rating, by the way. You can read my review of the film here.

Marc Freedman wrote How to Live Forever not only to offer insightful social commentary and tell heartwarming stories. He wrote this book to motivate those of us who are in the third third of life to invest a part of our lives in younger people. In one chapter he describes the transformational work of Eunice Lin Nichols, leader of the Generation 2 Generation campaign (Gen2Gen). Through this work, Freedman explains, “We hope to help build a society where older people standing up for younger ones becomes both the expectation and the norm in later life” (p. 126). When he gets done describing Gen2Gen, he writes, “I’ll even drop my reserve . . . and say that you should join this multigenerational effort built around purpose and joy, love and legacy. . . . If even a fraction of the one hundred million people over fifty in the United States today do so, imagine the world we could leave behind.”

This is the vision that motivates Marc Freedman, a vision of intergenerational relationships that transform the lives of both younger and older people, and ultimately our whole society. I am thankful for this book, its wisdom and spirit, and I heartily recommend it to you.