“Simon, Simon, listen! Satan has demanded to sift all of you like wheat, but I have prayed for you that your own faith may not fail; and you, when once you have turned back, strengthen your brothers.” And he said to him, “Lord, I am ready to go with you to prison and to death!” Jesus said, “I tell you, Peter, the cock will not crow this day, until you have denied three times that you know me.”

Jesus knew in advance that Peter would deny him and that this would be devastating for Peter’s faith. But Jesus prayed that Peter would turn back. When that happened, Jesus wanted Peter to minister to others. Jesus isn’t looking for perfection. Rather, he’s in the reclamation business. Jesus takes our failures and losses and uses them, reclaiming them for good. He uses us in our brokenness to bring his love and grace to others.

During my lifetime, reclamation of used materials has gone from rare to common, from ignored to highly valued. When I was a child, we didn’t reclaim any of our trash unless the school was having a paper drive. As I got older, reclamation centers became popular among those of us who would take our glass, cans, and paper goods so they could be recycled. Nowadays, most of us have dedicated trash cans for items that can be reclaimed and reused, thus helping to protect the natural environment.

Jesus was into reclamation way before it became popular; not reclamation of trash, however, but of broken human lives. We see a moving example of this in Luke 22. As Jesus was talking with his disciples during their last supper together, he spoke directly to Simon Peter in a most striking way. First, he said that Satan has asked to “sift” all of the disciples like wheat (Luke 22:31). Not good news! Then, Jesus addressed Simon Peter, saying, “But I have prayed for you [singular in Greek] that your own faith may not fail; and you, when once you have turned back, strengthen your brothers” (22:32). Simon Peter, picking up on the implication that he would fall prey to Satan’s sifting, swore to stick with Jesus even if that meant prison and death (22:33). Jesus responded by predicting that “Peter” would deny him three times before the next morning came (22:34). Ouch!

I’d like to focus today on what Jesus said to Peter. Jesus knew hard times and temptations were coming for Peter so he prayed specifically for him, that his faith would not fail. Interestingly, Jesus did not pray that temptation would be taken away from Peter. Rather, he asked that Peter’s faith would not disappear in any ultimate sense. It might be tested and battered, but would in the end be sustained.

Then Jesus added an imperative, telling Peter that, “once you have turned back, strengthen your brothers.” I am struck by the “once you have turned back” phrase. Jesus knew that Peter would deny him and that this would rock Peter’s faith. Yet Jesus believed that Peter would, in the end, return to his life of following Jesus. When that happened, Peter should “strengthen” his brothers who were in need of encouragement, teaching, and support.

Jesus gave Peter major authority and responsibility, even though Jesus knew that Peter was about to fail mightily. Or maybe even because Peter was about to fail mightily. When we fail, we have the opportunity to learn and grow. We become more realistic about our weaknesses and recognize our need for God’s strength. Failure can actually help us grow even more than success. Did Jesus know that Peter’s giving in to temptation would lead to deep grief, repentance, and growth for Peter? It seems so. Jesus was not in the “find the perfect human” business. Rather, he was in the human reclamation business. He takes us as we are in all of our brokenness and uses us so that even our failures are reclaimed for his purposes.

I’m reminded of my friend Robert. Robert is a unique craftsman and artist. Among his many talents is the ability to take broken things and turn them into art. Robert always keeps his eyes open for discarded items so he might reclaim them. 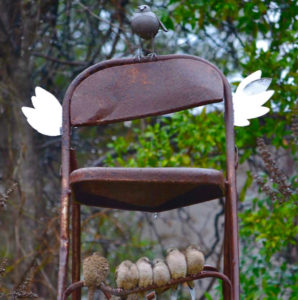 “Chairob” by Robert Feuge. Thanks to Robert for permission to use this photo.

One time when we were at Laity Lodge together, Robert was excited about an old, battered, rusty chair that he had found buried in the dirt somewhere. All I could see was one very sad chair. But Robert saw something altogether different. Soon he was working away on this chair, adding other things he had found buried. In time, that abandoned chair became a life-affirming sculpture. Robert explained, “‘The Chairob’ was made from things I found buried and given wings to fly. It became a place of rest for living things.”

In the season of Lent, we are particularly aware of our mortality, our sin, our brokenness. But we mustn’t define ourselves in light of these sad realities. Rather, we should delight in the fact that Jesus is in the reclamation business. He takes our brokenness and turns it into something beautiful. He takes our failure and transforms it for good in service to others, just like he did with Peter.

How do you think Peter felt when he heard all that Jesus had to say to him in this passage?

Do you ever feel like your brokenness is beyond reclamation by Jesus?

Have you ever experienced Jesus reclaiming your brokenness or failure as you served others for his kingdom?

Laity Lodge has a wonderful six-and-a-half-minute film focusing on Robert Feuge and his unique art. As you reflect on this film, think about how God has been reclaiming your life.

Today, Lord, I give you all that I am. I ask you to use me for your kingdom purposes. Reclaim that parts of me that are rusty and battered. Renew and restore me so that I might serve you and serve others in your name. Amen.

One thought on “Jesus Reclaims Our Brokenness”