As you know, we dealt with each one of you like a father with his children, urging and encouraging you and pleading that you lead a life worthy of God, who calls you into his own kingdom and glory.

In your workplace – today, may God give you the grace to encourage those with whom you interact: your colleagues, your subordinates, your superiors, your customers, your vendors, your clients, and all others.

Today’s devotion is part of the series Encouragement from 1 Thessalonians. 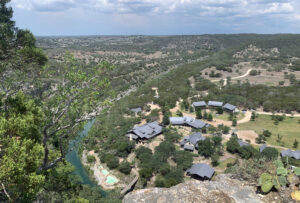 Headwaters, the site of Laity Lodge Family Camp, seen from the air

Recently my wife, Linda, and I spent a week at Headwaters, the amazing site where Laity Lodge Family Camp happens. (The photo offers a view of Headwaters from a local bluff. It lies alongside the Frio River in the Texas Hill Country.) Linda and I, as camp speakers for the week, got to hang out with a bunch of wonderful families. I loved watching these families enjoy each other as they ate, sang, learned, and played together.

At the camp rodeo, parents and children got into the action with a variety of competitive games. It was quite something to watch moms wearing celebrative dresses go all in for a tough game of tug of war, sometimes falling into the dusty dirt when their side was victorious. And it was sweet to watch dads on the sideline gently holding their babies as they cheered on their wives. I was struck by the fact that moms and dads in today’s world often overlap in their parental roles.

It wasn’t like that in the Roman world of the first century A.D. Mothers and fathers had quite distinct roles. Mothers were expected to nurture young children. Fathers were responsible for the education, including the moral development, of their children as they got older. In fact, according to Roman law, women were not permitted to be legal tutors of children until 390 A.D., though fathers sometimes tried unsuccessfully to appoint their wives as tutors (see Jane F. Gardner, Women in Roman Law & Society, 149-150). Whereas mothers were encouraged to treat their children gently, fathers assumed the roles of demanding coach and stern disciplinarian.

In 1 Thessalonians 2:11-12, Paul and Co. speak of themselves and their apostolic work using the simile of fatherhood, not unlike other philosophers of their day. But what Paul and his colleagues do with this simile is unique. For one thing, they are not just fathers in a generic sense. Rather, they are “like a father with his children” (2:11). In fact, the Greek reads even more strikingly: “like a father with his own [heautou] children.” This language is similar to what we saw in verse 7, in which the letter writers portray themselves as “a nurse tenderly caring for her own [heautēs] children.” Whether in a motherly or a fatherly role, Paul and his associates felt a deeply personal bond with each of their spiritual “children.”

Moreover, when acting as a father to the Thessalonians, the apostolic team did not revile their converts in the mode of the popular philosophers. Instead, they were “urging and encouraging [them] and pleading that [they] lead a life worthy of God” (2:12). The three Greek verbs in this sentence – translated here as “urging, encouraging, pleading” – have roughly the same meaning in Greek. None suggests harsh speech or vigorous censure. Rather, all three verbs portray speech that is supportive, empowering, and encouraging. Even when thinking of themselves in the role of father, the pastors to the Thessalonians have not abandoned their earlier posture of tender, motherly care.

What I read in 1 Thessalonians 2:11-12 reminds me of Radical Candor by Kim Scott. After graduating from Harvard Business School, Scott worked as an executive coach for several tech companies, including Dropbox, Twitter, Apple, and Google. She understands that managers are responsible for producing exceptional results. But she also insists that effective managers care for people in a personal way. She writes in Radical Candor, “It’s not enough to care only about people’s ability to perform a job. To have a good relationship, you have to be your whole self and care about each of the people who work for you as a human being. It’s not just business; it is personal, and deeply personal. I call this dimension ‘Care Personally.’” What we see in 1 Thessalonians, therefore, isn’t relevant only to church planters and pastors. It informs and encourages all of us to care for the people with whom we work, especially those whom we have the privilege of leading and/or managing.

There is another way in which the father simile in 1 Thessalonians stands out against the background of Greco-Roman parenting practices. I’ll address this in next Monday’s Life for Leaders devotion. For now, however, you may want to reflect upon the following questions.

As you reflect on your work life, to what extent have you felt personally cared for by those in authority over you? If you’ve had a boss who showed that kind of care, why do you think they acted in this way?

If you are a person in authority over others in your workplace, do you care for those you supervise in a personal way? If so, why? If not, why not?

Is it possible for a boss to care for people personally and also to hold people accountable for what is required in the job? Would a caring boss ever fire an employee? If so, why? And how?

Take time to reflect on how in practical ways you might imitate the example of Paul and his colleagues by encouraging the people entrusted to your care.

Wherever you have entrusted me with authority over people, help me to be like Paul and his colleagues. Help me to demonstrate care for each person for whom I am responsible. May I be for them a true source of encouragement and empowerment. If I need to give a word of correction, may I do so with honesty and kindness. In all I do at work and at home, in church and in my neighborhood, may I treat people with the same grace with which you have treated me. Amen.

Find all Life for Leaders devotions here. Explore what the Bible has to say about work at the unique website of our partners, the High Calling archive, hosted by the Theology of Work Project. Reflection on today’s Life for Leaders theme can be found here: Calling God “Abba, Father”

Praying Like Jesus: Father In the Gospel of Luke, Jesus teaches his followers to pray to God as Father.…
Online Course: Leading Like Nehemiah in a Crisis An Online Course on Fuller Formation How can you address your own emotions and those…
The First Word: Father, Forgive Them It makes perfect sense that the first word of Jesus from the cross is a…
The Prodigal Father The parable of Jesus we know as “The Prodigal Son” could actually be called “The…