The Lord Will Fight for You

The Egyptians said, “Let us flee from the Israelites, for the Lord is fighting for them against Egypt.” Then the Lord said to Moses, “Stretch out your hand over the sea, so that the water may come back upon the Egyptians, upon their chariots and chariot drivers.” So Moses stretched out his hand over the sea, and at dawn the sea returned to its normal depth. As the Egyptians fled before it, the Lord tossed the Egyptians into the sea. The waters returned and covered the chariots and the chariot drivers, the entire army of Pharaoh that had followed them into the sea; not one of them remained. But the Israelites walked on dry ground through the sea, the waters forming a wall for them on their right and on their left.

You can read the whole story of the Israelites at the Red Sea in Exodus 14.

We have to reckon with the destruction caused by the complex interplay of divine intention and the desires of humans in the Exodus story. And we also have to reckon with something else: Jesus ultimately entered this story. He ultimately answered the violence of the way things happen in this world by submitting to it.

When I last wrote for Life for Leaders, we looked at the beginning of Moses’s story—his miraculous preservation as a baby. Now we are much further along in the story; Moses has been called to deliver the Israelites, the plagues have been sent, the Hebrew people have escaped, and the Egyptian army has been chasing them to the Red Sea.

As the Egyptian army catches up with the Israelites, the Israelites become afraid. They should have stayed in Egypt, they say (this is, incidentally, not the last time in the next forty years they will say that.) Moses reassures them. The Lord will deliver them:

But Moses said to the people, “Do not be afraid, stand firm, and see the deliverance that the Lord will accomplish for you today; for the Egyptians whom you see today you shall never see again. The Lord will fight for you, and you have only to keep still.” (Exodus 14:13-14).

And then one of the greatest miracles in the life of Moses occurs—which is saying something, given that this is the man who met God in a burning bush. The Lord tells Moses to hold up his staff and stretch it over the sea (Exodus 14:15) and the people will be able to cross over on dry ground. Moses does, and the water parts—it takes it all night to do it. The Israelites walk across. When the sun comes up the Egyptians see them and go in after them, but the Lord throws the Egyptian army into confusion and then closes the water over them. Not one escapes (Exodus 14:30). 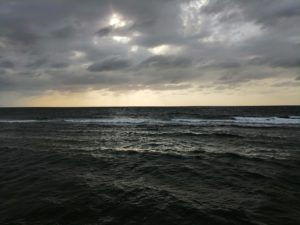 The Red Sea from the view of Jeddah, Saudi Arabia’s coast

People have often struggled with this story. God accomplishes a great deliverance for the Israelites, but here—and elsewhere in the story, as with the plagues—he does so at the cost of an awful lot of suffering and dead Egyptians. Perhaps we could see that judgment being enacted on Pharaoh, who actively fought against the Lord and would not let the Israelites leave, but should the whole army have been destroyed? Weren’t most of them simply following the orders of their leader?

In the early church, some interpreters got around this difficulty by interpreting the story allegorically. The Egyptians represent the presence of original sin in our life, they said: God destroys this sin through baptism, which is represented by the Red Sea. (This once prompted my husband to quip regarding certain besetting sins that trouble us: “Why is it always the same Egyptians?”)

Without negating that interpretation, I want to go beyond it. If we believe—as I do—that this story really happened, then we have to reckon with the destruction caused by the complex interplay of divine intention and the sinful though well-intentioned desires of humans in the Exodus narrative.

And we also have to reckon with something else, which we’ll discuss more tomorrow: Jesus ultimately entered this story. He ultimately answered the violence of the way things happen in this world by submitting to it. He ultimately became, not Moses or Pharaoh or anyone else with power in this story, but the Passover lamb whose blood was upon the doorpost.  His blood saves us. He said so himself.

What were your thoughts about this story before reading this devotional? Have they changed?

What does this mean for your own life?

Listen to a recording of the song “Mary, Don’t You Weep” which refers to this story (perhaps this one) and ponder its meaning in your own life.

Now That You’ve Got on God’s Armor, How Do You Fight? A more literal translation would be, “Take the helmet of salvation and the sword of…
You Can Please the Lord! A more complete motivation for right living takes seriously the implied good news of Ephesians…
The Lord is With You The example of Mary in the Gospel of Luke reminds us that God isn’t with…
Prayers for Workers: Serve the Lord of All By your grace, Lord, may I serve you with reverent fear in all that I…